Even as Malik's lawyer argued that the remand copy used the term “terror funding” very casually in a deliberate attempt to malign the NCP leader's name, he was sent to the ED's custody until March 3. 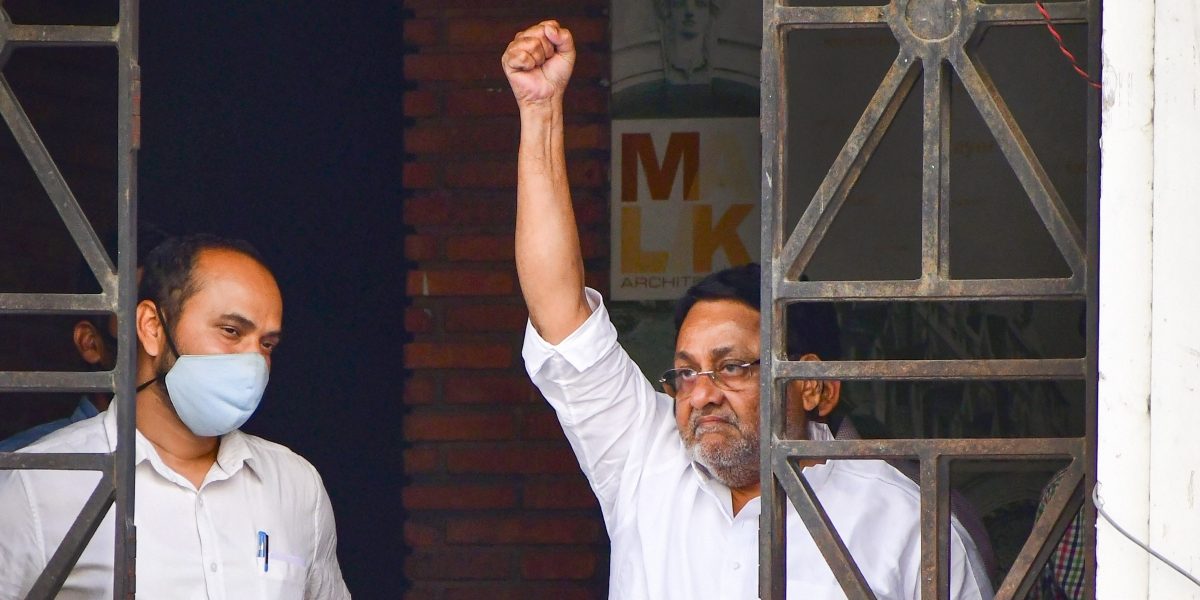 NCP leader and Maharashtra minister Nawab Malik being taken for a medical test after his arrest by the Enforcement Director (ED), Mumbai, February 23, 2022. Photo: PTI

Mumbai: Many in the Maha Vikas Aghadi – the ruling coalition government in Maharashtra – had said months ago, “Nawab Malik’s arrest is inevitable”. This was not because the state cabinet minister was known to be involved in any criminal activities but because of his bold statements that central investigative agencies were allegedly “misusing power” in the state.

As predicted, the Enforcement Directorate (ED), on Tuesday, February 23, arrested the Maharashtra state minorities and skill development minister following several hours of questioning. He was sent to the ED’s custody until March 3.

The ED assistant director, Niraj Kumar, in the arrest order issued soon after Malik was taken into custody, claimed, “Mohammed Nawab Mohammed Islam Malik @ Nawab Malik… has been found to be guilty of an offence punishable under the provisions of Prevention of Money Laundering Act, 2002 (15 of 2003).” Even before Malik’s production in the court, the ED officials had declared him “guilty” of the crime he was arrested for.

While the arrest order mentions the Act and the sections under which Malik has been charged, the offence is not mentioned. Malik was taken for the routine medical examination soon after his arrest from the agency’s south Mumbai office. He was subsequently produced before the special designated PMLA court.

Even as Malik was being questioned, his social media handle – reportedly handled by his daughter Nilofer – was actively defending him. Soon after his arrest, Malik said, “Ladenge, jeetenge, sabko expose karenge (We will fight, win and expose everyone)”

The ED, represented by additional solicitor general Anil Singh, seeking full 15 days custody of Malik, told the court that Malik’s company was involved in buying a property illegally from Haseena Parker, sister of Dawood, in Kurla at a price much lower than the actual price. According to the ED, the actual owners of the property are Munira and Marium.

“It is their ancestral property and one Salim Patel was handed over the power of attorney only to ensure that the land remains free of any encroachment,” Singh claimed in his argument the court. Patel, the ED claims, was working on the behest of Parker and had later sold the land to a company belonging to Malik’s family. The original owners, whose statements have already been recorded by the ED, have claimed that they were not involved in the transaction and that they did not get a penny for the sale.

Parker, who died several years ago, was actively involved in the deal, the ED has claimed. Another person, Sardar Khan, a 1993 blast convict, was also involved, the agency claimed. The land would have cost anything above Rs. 3.3 crore but was bought for Rs 55 lakhs, Singh told the court. 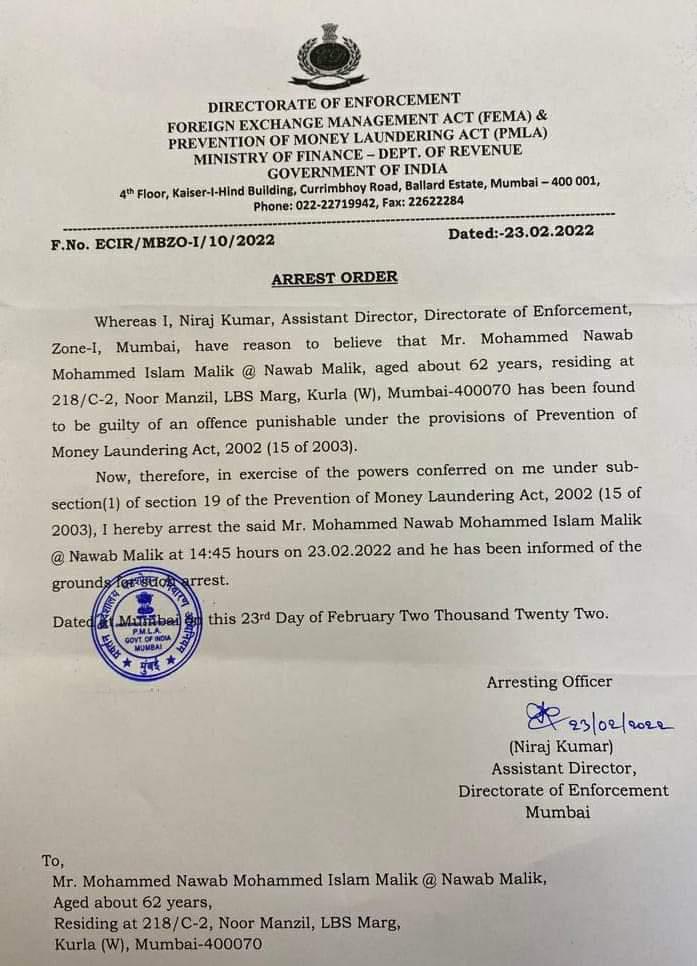 Amit Desai, a senior counsel appearing for Malik, argued that the minister was falsely implicated in a case that was over 20 years old. Desai argued that the complainants have taken a “very convenient route” to complain about an alleged crime committed in 1999 in 2022. “For 15 years you don’t get rent, but you don’t do anything. Also, why against Mr Malik? He is not a member of the gang. Where is the FIR in relation to the predicate offence?” Desai asked.

Desai also said that the remand copy has used the term “terror funding” very casually and it is a deliberate attempt to malign Malik’s name. “It is politically motivated” Desai argued. “The headline (in media) will be terror funding tomorrow. Last 25 years this man is in public service. I do believe our public knows who they are voting for,” Desai said in Malik’s defence.

According to the statements given by Munira, it was Salim Patel who had allegedly committed the offence and got the property sold to another party without her consent. Desai argued that if anyone, the complaint should be against Patel. “That is the requirement of the law. If at all Munira has a grievance against Salim Patel, where is Malik in all this? Malik himself is a victim because a person who didn’t have the title to the property sold the property to him,” Desai argued.

Malik’s social media claims had made Wankhede a household name and Wankhede’s family had moved the Bombay high court seeking a restraining order against Malik. The NCB leader had also accused Wankhede of falsely implicating his son-in-law Sameer Khan in a drugs case in January 2021.

Among the many allegations made by the BJP leaders, one was by former chief minister and opposition leader Devendra Fadnavis. In a press conference addressed on November 10, Fadnavis had claimed that Malik and his family bought land parcels from people linked with the underworld.

The ED is believed to have registered a case against Malik on the basis of the allegations levelled by Fadnavis. According to Fadnavis, Malik and his family members had allegedly purchased land in Kurla in suburban Mumbai from two persons – Saleem Ishaq Patel and Sardar Shah Wali Khan – using fictitious documents and by paying far less than the actual property rate. While the original value of the plot was around Rs 3 crore, Fadnavis claimed that a company owned by Malik’s company purchased it for a meagre Rs 20 lakh. This property deal was completed in 2007.

There are allegations that the property was allegedly bought by Malik from an aide of Dawood Ibrahim, a fugitive gangster, at a price lower than its prevailing market rate.

Soon after Malik was taken to the ED office, his party colleagues took to social media and addressed the media in his defence.

Senior NCP leader Supriya Sule shared a video of Malik from December 11, last year. Here, Malik could be heard saying that he has been hearing from the media for a few days that the ED will soon arrest him. This, he claims, was spread by another BJP leader Kirit Somaiya, who had accused Malik of siphoning money in a property deal, connected to Wakf board, in Pune.

NCP chief Sharad Pawar said that the BJP is resorting to a tried and tested formula. “Which case have they dug up? It is simple. They take the name of Dawood, especially if there is a Muslim activist (against whom a case is dug up). There is no relation (between the activist concerned and underworld), but it is done.” Pawar said he too was “targeted similarly” in the early 90s when he was the chief minister of Maharashtra, just to create animosity against him.

“Twenty-five years have since passed. Names from the underworld are time and again used to defame and trouble those taking positions against the Centre,” Pawar further added.

Malik is the second minister from the Maha Vikas Aghadi government to be arrested. In November last year, the state’s then home minister Anil Deshmukh was arrested on a corruption charge. He has since been in jail.