The Centre has declared national waterways in several states without proper deliberation with the respective governments.

This is the second article in a two-part series on the national waterways. Read the first part here.

In fact, according to a file note dated July 24, 2015, only 18 of 25 states gave positive feedback to the Bill, while some states, like Uttar Pradesh, did not respond at all.

The Wire has accessed official documents in response to a Right to Information request which reveal that the Centre has declared national waterways in states without proper deliberation with the respective governments.

It is noteworthy that the Centre’s legislative department had advised the Ministry of Shipping that the Bill should be prepared after discussion with the states as well as different ministries.

According to the file notes and official correspondence obtained by The Wire, a total of seven states agreed with the Centre’s proposal. Several states like Bihar, Delhi, Haryana, Himachal Pradesh, Punjab and Telangana agreed with a condition.

After a letter sent by the Inland Waterways Authority of India (IWAI) dated November 12, 2014, and a meeting with IWAI member R.P. Khare on June 30, 2015, the water resource ministry of Madhya Pradesh in a letter dated July 16, 2015 objected to the proposal and expressed concern over its cost.

IWAI falls under the Union Ministry of Shipping, which is working towards the development of national waterways. The state government had informed IWAI that declaring Madhya Pradesh’s waterways as national waterways would be an infringement on the constitutional rights of the state.

In its letter, the state government wrote, “The rivers flowing through Madhya Pradesh originate within its boundaries and are rain-fed. Therefore, these rivers do not carry sufficient non-monsoon flows to cater for navigational needs.” 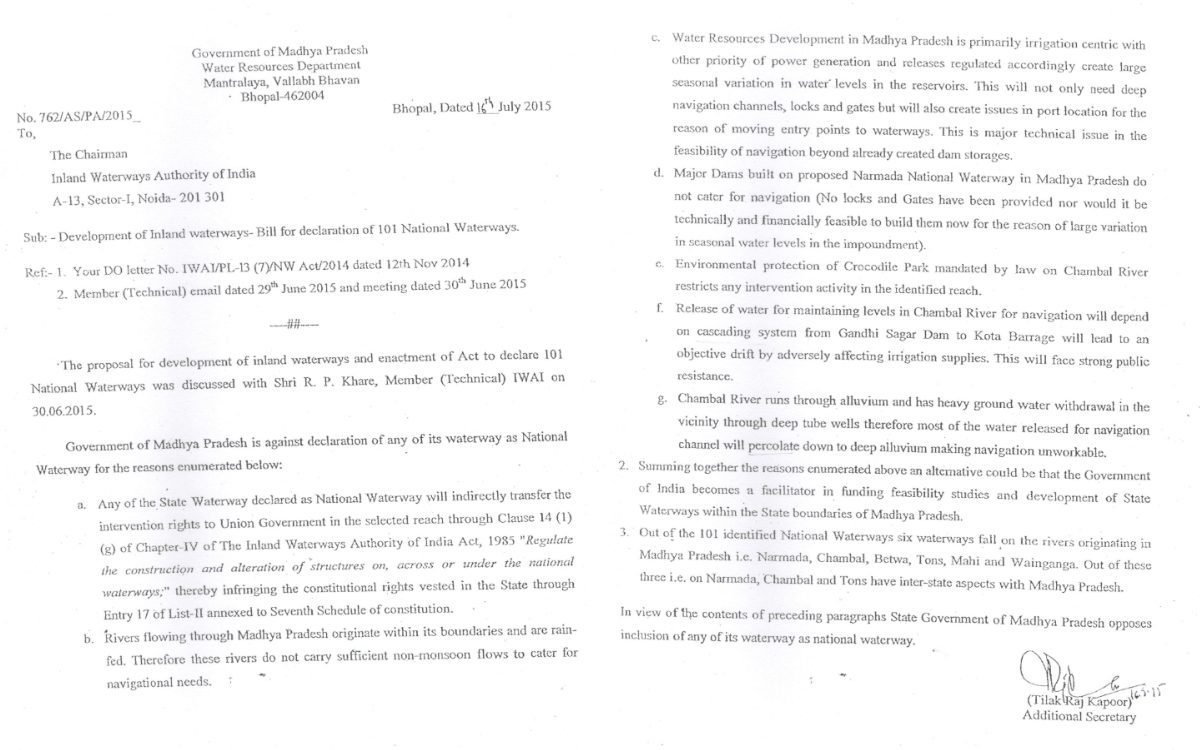 The letter sent by the Madhya Pradesh government.

Of the 101 national waterways identified by the Centre, six waterways fall on the Betwa, Chambal, Mahi, Narmada, Tons and Wainganga rivers of Madhya Pradesh. Of these, three – Narmada, Chambal and Tons – have “inter-state aspects with Madhya Pradesh”, the letter said.

The state government cautioned the Centre that the environmental protection of the crocodile park mandated by law on the Chambal river restricts any intervention. Madhya Pradesh also said that release of water for maintaining levels in the Chambal river for navigation would adversely affect irrigation supply and result in strong public resistance.

With these comments, the Madhya Pradesh government suggested that if the Centre wants to build waterways, it should help in funding feasibility studies and cooperate in the development of state waterways. 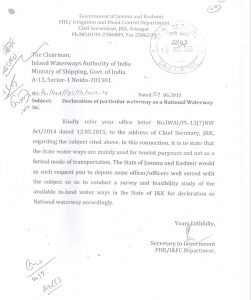 According to official documents accessed by The Wire, the Jammu and Kashmir government had called for a survey and feasibility study by experts before declaring national waterways.

In its letter dated June 29, 2015, the state wrote, “The state waterways are mainly used for tourist purposes and not as a formal mode of transportation. The State of Jammu and Kashmir would as such request you to depute some officer/officers well versed with the subject so as to conduct a survey and feasibility study of the available in-land waterways in the State of J&K for declaration as National Waterways accordingly.”

Despite the J&K government’s demands, the Centre declared national waterways would be developed on its rivers Chenab, Ravi, Indus and Jhelum.

The Jharkhand government also wrote to the Centre regarding its proposal to declare national waterways on Subarnarekha and Kharkai rivers, saying that so far no detailed survey or investigation has been done by the project authorities. The state government enclosed a brief report regarding the project and possibilities of navigation on the two rivers with its letter dated July 2, 2015, and demanded a detailed study be conducted before declaring any national waterways.

In its report, the state highlighted that navigation is not possible on a large portion of the Subarnarekha river.

Jharkhand Govt on National … by The Wire on Scribd

In its letter dated July 17, 2015, the state government said that ever since the construction of the Bhakra Nangal Dam, Ropar Head Works (dam), Harike Head Works (dam) on the Sutlej river and Pong Dam on the Beas, the water level in these rivers is almost negligible from September to June.

West Bengal’s Mahananda, Ajoy, Jalangi, Dwarka, Bakreswar, Damodar, Dwarakeswar, Silabati, Kumari and Ichchamati are also among the 101 national waterways declared by the Centre, even though the state had written a letter on January 30, 2015 informing the shipping ministry that these rivers do not carry sufficient discharge during lean seasons between December-January up to March-April for sustainable commercial navigation.

Most of these rivers also do not have adequate perennial flow at the off-take to make commercial navigation viable, the letter said. 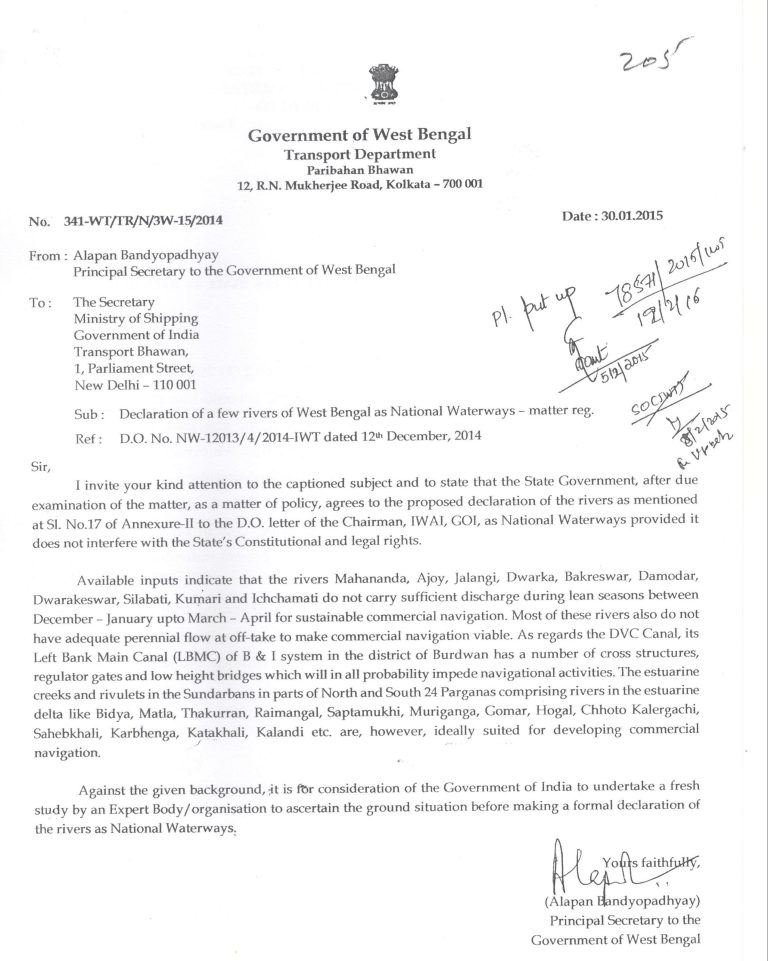 Letter by the West Bengal government.

The state also advised the Centre to undertake a fresh study by an expert body to ascertain the ground situation before making a formal declaration.

The Tamil Nadu government had also raised objections to the Bill and agreed to declare only two out of nine waterways of the state as national waterways as proposed by the Centre.

Tamil Nadu Govt on National… by The Wire on Scribd

However, despite the state’s objection, the Centre declared all nine as national waterways.

In its letter dated November 2, 2015, the state government wrote: “Techno-economic feasibility study should be carried out first and then only Waterways with depth of flow required for navigation should be included in the list of National Waterways before passing the bill.”

“The draft bill incorporating the comments of the states may be sent to state governments and stakeholders for consensus before passing the Bill,” it added.

Also read: Why Is Narendra Modi Allowing Nitin Gadkari to Destroy the Ganga?

The Bihar government also did not entirely agree with the Centre’s proposal, but consented to the Bill with strict conditions.

Previously, The Wire had reported how the Centre’s decision to declare 106 waterways of the country as “national waterways” was met with strong opposition from two major Central departments: NITI Aayog and the Ministry of Finance.

The Ministry of Shipping had been expressly warned that it would not be right to declare any waterway a national waterway without extensive deliberation. It was also told that if such a huge number of waterways are declared national waterways, it will become a huge financial liability for the Centre and can cause irreversible damage to the aquatic ecosystem.

A scrutiny of official documents reveals that the Centre passed this Bill without extensive deliberation. Many members of the parliamentary committee had expressed concern over it.

Apart from this, the legislative department of the Centre had also advised the shipping ministry that the Bill should be prepared only after discussion within ministries as well as the states.

In its letter written in January 2015, the legislative department told the shipping ministry:

“As the inter-Ministerial consultation process including the State Governments on the proposal is yet to be completed, the administrative Ministry is requested to finalise its policy after pre-legislative consultations are over and thereafter, incorporate necessary changes, if any, in the draft Note for the Cabinet.”

However, the IWAI said that as far as the consultation process is concerned, opinion can be sought at the ministerial level and incorporated in the cabinet note as per convenience.

Note that the cabinet gave its approval to declare 101 waterways as national waterways on March 25, 2015. The Bill was presented in the Lok Sabha on May 5, 2015, after which it was sent for examination to the parliamentary standing committee on travel, tourism and culture.

On August 12, 2015 the committee submitted its suggestions regarding the Bill following which the shipping ministry amended the Bill, incorporating some of the suggestions, and proposed to declare 106, instead of 101, waterways as national waterways.

The parliamentary committee had also raised many questions regarding consultation with states. According to a record of discussion of the parliamentary committee meeting held on June 19, 2015, Samajwadi Party leader Kiranmoy Nanda, a member of the committee, expressed concern that several rivers in eastern Uttar Pradesh which were included in the list of national waterways were dry and that the decision was taken without the UP government’s consent.

Parliamentary Standing Comm… by The Wire on Scribd

On Nanda’s question regarding UP’s consent, the chairman of IWAI, Amitabh Verma, said that a couple of interactions with the principal secretary, irrigation of the state have been held but they have not given written consent on those rivers.

Another committee member, Communist Party of India (Marxist) leader Ritabrata Banerjee said, “There are 14 rivers from West Bengal in the list of rivers. Out of these 14, there are rivers which are, basically, rainfed. You will find very little water.”

She further added, “As far as the experience of the Standing Committee is concerned, when we were in Madurai and crossing Vaigai River, it was basically a playground; there is not even a stretch of water.”

To this Verma responded, “We don’t need water in the whole width of river all the time. What we generally do is, we have a small channel of 30-50 metres depending on the class of vessel to move and we try to maintain that channel.”

Another committee member, Congress leader K.C. Venugopal, said, “We have a federal structure. Before taking these 101 waterways into national waterways, at least you should have taken consent from the state government concerned.”

Venugopal also pointed out that this could be one of the ways to give rivers to private parties.

On this, Verma said that so far 10 states have responded while the remaining are expected to respond. He said that work would not be taken up before they have the consent of the state governments.

Meanwhile, Jan Adhikar Party leader Rajesh Ranjan alias Pappu Yadav said, “Gandhiji had described transportation as a means to perpetuate exploitation and was greatly worried that these resources may become a systematic way to plunder villages. He once said that it is the market penetrating the village in search of customers, and not the village creating its own system.”

Tiwari said, “Our country is so huge with some regions flooded and others suffering a drought that if a river does not have water, arrangements can be made to supply water. When we plan to interlink rivers, we should think positively about the Bill as being very crucial for the future of India.”

Sinha said that he has been a great advocate of inland waterways transportation and had given some suggestions in this regard. The committee was chaired by Trinamool Congress MP Kanwar Deep Singh.

The parliamentary committee had submitted its suggestions on the Bill on August 12, 2015. Incorporating some of the suggestions, the Union cabinet approved the fresh proposal on December 9, 2015 and the Bill was passed in the Lok Sabha on December 21, 2015 and in the Rajya Sabha on March 10, 2016.