How the Modi Government Has Used – and Dropped – the 'Terrorism' Bogey

Once the bogey of terrorism threatened to impact economic interests, it became the propaganda with diminishing returns. 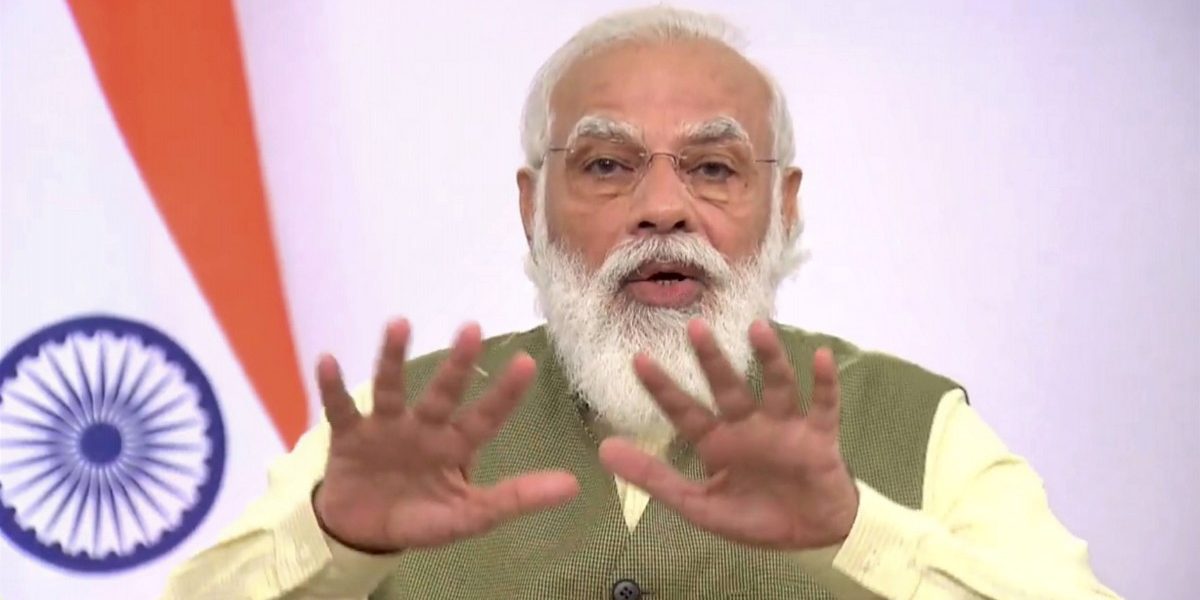 Two curious things happened within a span of a week in September.

On September 21, the Delhi Police in its charge-sheet against those it has accused of instigating the February 2020 riots in Delhi qualified the suspects as ‘terrorists’. A first in India; historically, communal violence has been treated as a law and order issue. Seldom has a person been charged with instigating or carrying out communal violence, let alone served a prison term.

Clearly, India is changing. Incidentally, this list of suspects comprises largely students, civil society activists and politicians. Another first in India. Traditionally, communal violence has been blamed on small-time politicians and lumpen elements. The additional detail that most of those charged with planning the riots as well as the victims of riots are Muslims, may be of some consequence.

To forcefully make its case, Delhi Police’s final report, duly signed by the deputy commissioner and assistant commissioner of police, takes recourse to some mysterious global definition of terrorism. It says “internationally, terrorist activity is defined as the use of violence to force a government to accept/submit to political demands”.

Thereafter, to further explain what terrorist activity is, the report falls back on the government of India’s Unlawful Activities (Prevention) Act. Quoting Section 15, it says, “In this case, the use of firearms, petrol bombs… causing death of police personnel and grievous injuries… with intention to overawe the State and force the central government to withdraw CAA, NRC clearly falls in the definition of terrorist activity.” Interestingly, there is no universal or global definition of terrorism. But more on that later.

The second curious thing was Prime Minister Narendra Modi’s virtual pre-recorded address to the United Nations on September 27, 2020. The media, wont to speculate, was rife with reports that the prime minister would once again (as he had done in the past) call out Pakistan, and make a strong pitch against terrorism. Some wrote that the prime minister would draw attention to China too.

None of this happened. While China remained ‘one who must not be named’, terrorism was a mere footnote, mentioned in the context of the role India would play at the UN once its term as a non-permanent member of the security council starts from January 2021. He said, “India will not hesitate in raising its voice against the enemies of humanity, human race and human values – terrorism, smuggling of illegal weapons, drugs and money-laundering.”

For someone who has consistently maintained that terrorism was not only the biggest threat facing India, but the world too, this reticence is surprising. Recall Modi’s first address at the UN in 2014. He called for early adoption of the Comprehensive Convention on Global Terrorism. He called it a matter “that has been pending for long”. A few weeks later, while addressing the Indian military commanders at the Combined Commanders’ Conference in October, he told them, “Beyond the immediate, we are facing a future where security challenges will be less predictable; situations will evolve and change swiftly; and, technological changes will make responses more difficult to keep pace with. The threats may be known, but the enemy may be invisible.” This was interpreted as a reference to terrorism.

Sure enough, it was understood well. In 2015, the Indian Army floated a tender inviting bids to construct a training village inside the Officers’ Training Academy in Gaya. The village was to simulate conditions of operations of the Indian Army. In this, the Indian Army asked for, among other things, structures of village huts with different specifications of material and sizes, a mosque and a church. It also asked for mannequins to be dressed in pherans, burkhas, pathani suits, skull caps, traditional clothing of women from the Northeast and robes of a Christian priest!

In December 2016, the government appointed Lieutenant General Bipin Rawat as chief of army staff superseding two officers. The reason for this rare deep selection was Gen Rawat’s proclaimed expertise in counter-terrorism. The government made it clear that the threat the army had to prepare for was terrorism and not conventional war.

Not to be left behind, in his last press conference, held in December 2016, outgoing chief of air staff Air Chief Marshal Arup Raha told the media that, “We have to focus on deterring terrorist attacks or fighting the sub-conventional threats. We are training large number of personnel for this role. We are tweaking our tactics and are looking at equipment for this role… We have received government approval for raising 27 additional flights of Garud.” Garud is IAF’s commando force akin to Indian Army’s Para commandos.

Also read: No, Gen. Rawat, ‘Radicalisation’ is Not a Drug Habit, You Can’t Send Boys to ‘Camp’ for it

Year on year, government’s focus on terrorism became sharper, frequently calling it the biggest threat faced by India. Not only India repeatedly raised it at the UN – in 2017, external affairs minister Sushma Swaraj urged the UN General Assembly to ‘accept that terrorism is an existentialist danger to humankind’ – Modi invoked it in almost all his bilateral engagements, frequently inserting it in the joint statements.

Yet, despite India’s exertions, the world refused to warm up to the idea. At the G-20 Summit in Japan in 2019, while Modi told the who’s who of the world, “Terrorism is the biggest threat to humanity. Not only does it claim the lives of the innocents, it negatively affects economic development and communal harmony. We have to stop all mediums of support to terrorism and racism,” others spoke of the ‘global economy, trade and investment, the environment and energy, innovation, employment, women’s empowerment, development, and health.’

So what gives? What made India downgrade the biggest threat to humanity?

Possibly two things. One, revocation of Articles 370 and 35A from the former state of Jammu and Kashmir in August 2019 was touted as ending one of the root causes of terrorism in India. As Modi himself told the Indian diaspora in Thailand in November 2019, “You are aware that India has decided to eliminate one of the root causes of terrorism and separatism.” Once this was done, terrorism couldn’t have remained the ‘biggest threat,’ else the revocation and the ensuing hardships would have been exercise in futility. Never mind the political realities of Kashmir today!

The second answer perhaps lies in Global Terrorism Index (GTI) released by the Australia-based Institute for Economics and Peace (IEP). Issued annually, GTI assesses the impact of terrorism on the society and economy of a nation. This apparently shapes investors’ sentiment and the inflow of foreign direct investment into a nation. The recent GTI index downgraded India’s ranking, from eight in 2017-2018 to seventh in 2019. The only countries worst-affected than India are Iraq, Afghanistan, Nigeria, Syria, Pakistan and Somalia. While India ranks at 7, Pakistan is at 5. Even countries like Yemen, Democratic Republic of the Congo and South Sudan have a better outlook than India.

The GTI, which largely depends upon the data collated by National Consortium for the Study of Terrorism and Responses to Terrorism (START) at the University of Maryland, says that worldwide deaths caused by terrorism have halved in the last four years. Hence, while the intensity of terrorism has been reducing, “…the threat of far-right political terrorism has been rising over the past five years, with 19 countries affected by attacks in this period. In these regions far-right attacks increased by 320 per cent between 2014 and 2018.” Though the regions that the report refers to as worst affected by far-right political terrorism are North America, Western Europe and Oceania, India has consistently been getting bad international press in the last few years for its treatment of minorities, hence there is a concern that it could at some point get clubbed with them.

Before one disses GTI as obscure and inconsequential, it might be worthwhile to know that no less than the NITI Aayog objected to its ranking of India. In an article dated 30 April 2020, NITI Aayog questioned the GTI as both doubtful and suspect. The article says, “The 2019 GTI Report throws some startling conclusions… such a conclusion may not be inherently true. Apart from such surprising rankings, the report also makes other startling conclusions such as stating that the ten countries with the highest impact of terrorism, including India, are all engaged in at least one armed conflict.”

Interestingly, NITI Aayog also drew attention to the fact that there is no globally recognised definition of terrorism. Hence GTI cannot resort to one blanket argument on terrorism for all nations. In this, the NITI Aayog’s article echoed what UN Secretary General Ban Ki-Moon had said in January 2016, when he presented his Plan of Action to Prevent Violent Extremism. “Sweeping definitions of terrorism or violent extremism are often used to criminalise the legitimate actions of opposition groups, civil society organisations and human rights defenders. Governments should not use these types of sweeping definitions as a pretext to attack or silence one’s critics,” he had then said. Perhaps, Delhi Police needs to read the NITI Aayog article, even if it does not care for the UN.

Not content with criticising the report, NITI Aayog also questioned its motives. According to the above mentioned article, ‘The Australian Government’s Charities and Not-for-profits Commission does not reveal any data about IEP’s funding sources. Emailed queries sent to the IEP requesting a list of its donors have also remained unanswered.’ So, clearly GTI ranking matters.

This is the reason, during the just concluded monsoon session of parliament minister of state for home affairs, G. Kishan Reddy, in a written reply trashed the July 2020 UN security council report on al-Qaeda and ISIS which claimed that there was significant presence of IS terrorists in Kerala and Karnataka. According to the minister, the report was factually incorrect. The minister clarified that only 34 cases pertaining to the presence of IS in India have been registered by National Investigative Agency.

In different times, the UN report would have been music to the government’s ear as it would have played neatly into its narrative of India being a victim of Islamic terrorism. For years, members of the ruling party have been using the argument of Islamic terrorism to not only vilify the entire community in India; but also encourage administrative discrimination against them by frequent allusion to jihad.

However, once the bogey of terrorism threatened to impact economic interests, it became the propaganda with diminishing returns; hence, the efforts to underplay the ‘threat’ of terrorism. Here the government has adopted a two-prong approach – one for the world and another for its domestic constituency which thrives on religious polarisation.

This is the reason that recently appointed president of BJP youth wing, Tejasvi Surya told the media on September 28, 2020, “In last few years, Bengaluru, the Silicon Valley of India, has become epicentre of terror activities. It has been proved through many arrests and sleeper terror cells busted by the investigative agency in the city,” and Delhi police slapped charges of terrorism on those protesting against government’s discriminatory policies. But on international forum, the prime minister refrained from drawing attention to terrorism.

Could there be a more compelling argument to underline how flippantly and deviously the government has used the bogey of terrorism to fulfil its short-term objectives?

Ghazala Wahab is executive editor FORCE newsmagazine. Her forthcoming book Born a Muslim will be published by Aleph Book Company in early 2021.