In the absence of Sushma Swaraj, Jaishankar may get MEA portfolio; Piyush Goyal may step in for Arun Jaitley as finance minister. 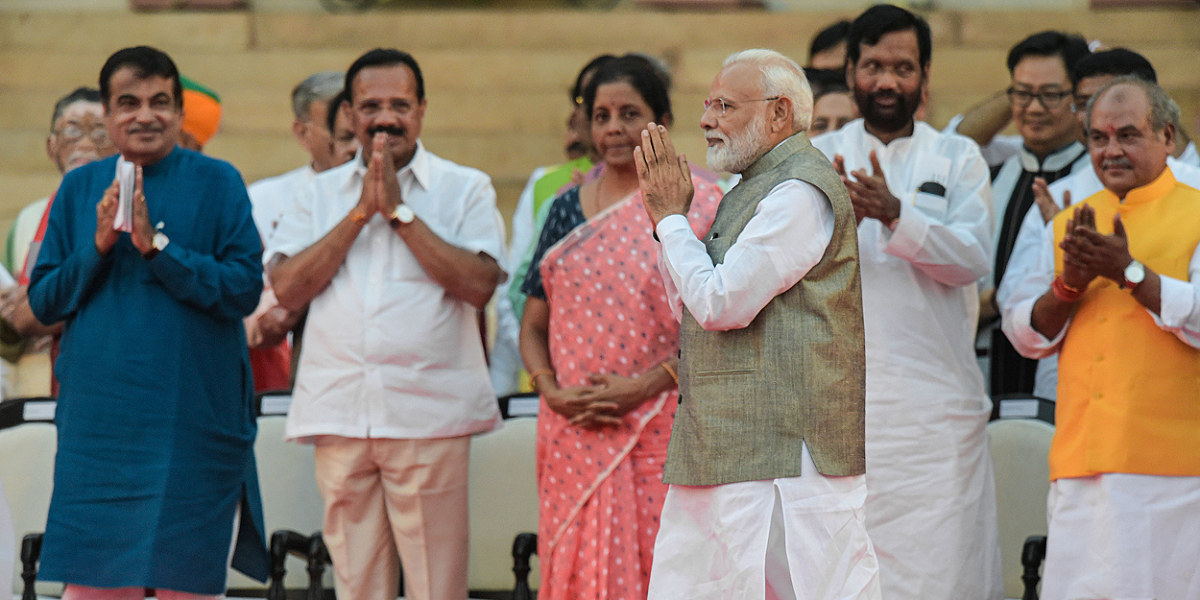 Prime Minister Narendra Modi being sworn in on May 30, 2019, at the Rashtrapati Bhavan, New Delhi. Credit: PTI

New Delhi: President Ramnath Kovind on Thursday administered the oath to Narendra Modi as Prime Minister of India in the forecourt of the Rashtrapati Bhawan in the presence of a large number of dignitaries, including heads of other countries.

Notable among those who took oath for the first time and as cabinet ministers were BJP president Amit Shah and former foreign secretary S. Jaishankar. On the other hand, two prominent ministers of the Modi government’s first reign did not figure in the government this time. They were Sushma Swaraj, who was earlier external affairs minister and did not contest the elections on health grounds, and Arun Jaitley, who held the finance portfolio earlier, and who wrote to Modi on Wednesday asking to be exempted for health reasons too. Jaitley underwent a kidney transplant last year and his condition has not yet stabilised.

Among former ministers, Arun Jaitley had announced his unavailability due to health, as had Sushma Swaraj, even before the elections. But eyebrows were raised when several high profile ministers from Modi’s first tenure failed to make the cut this time: Suresh Prabhu, Maneka Gandhi, Jayant Sinha and Mahesh Sharma.

After Modi took oath, former BJP president Rajnath Singh, who held the home portfolio previously, was sworn-in, indicating that he would remain the second most important person, at least officially, in the new Modi government.

After Singh, it was Shah who was sworn in. He won his first Lok Sabha election from Gandhinagar. The seat was earlier represented by BJP’s senior leader L.K. Advani. Shah would now be moving from the Rajya Sabha to the Lok Sabha. 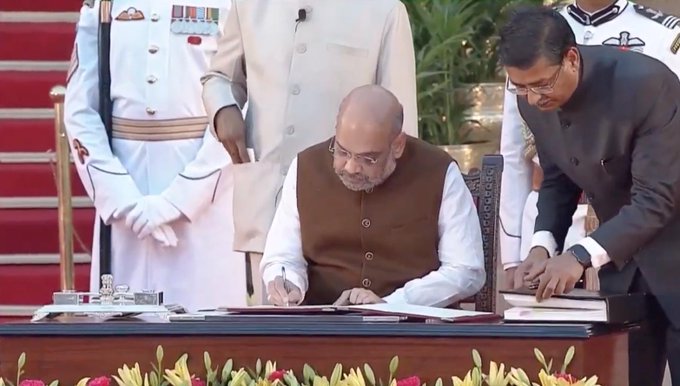 Amit Shah being sworn in on May 30, 2019, at the Rashtrapati Bhavan, New Delhi. Source: Twitter

A number of other senior cabinet ministers of Modi’s first government returned. Nitin Gadkari, who held the shipping, road transport and highways portfolios in the previous government, was also sworn-in.

Former Karnataka chief minister D.V. Sadanand Gowda, who was minister of statistics and programme implementation in the previous government, was also sworn in as a cabinet minister.

Nirmala Sitharaman, who earlier had the defence portfolio, was the first woman to be sworn in on Thursday.

With Sushma Swaraj and Arun Jaitley not in the cabinet, the Cabinet Committee on Security will have two new faces this time.

Piyush Goyal, a confidant of Modi, who was minister of state (independent charge) for power, coal and new and renewable energy initially before taking over as the railway minister, was also sworn in. It is widely believed that in the absence of Jaitley, he may be given the finance ministry. Incidentally, he had also presented the interim budget earlier this year. 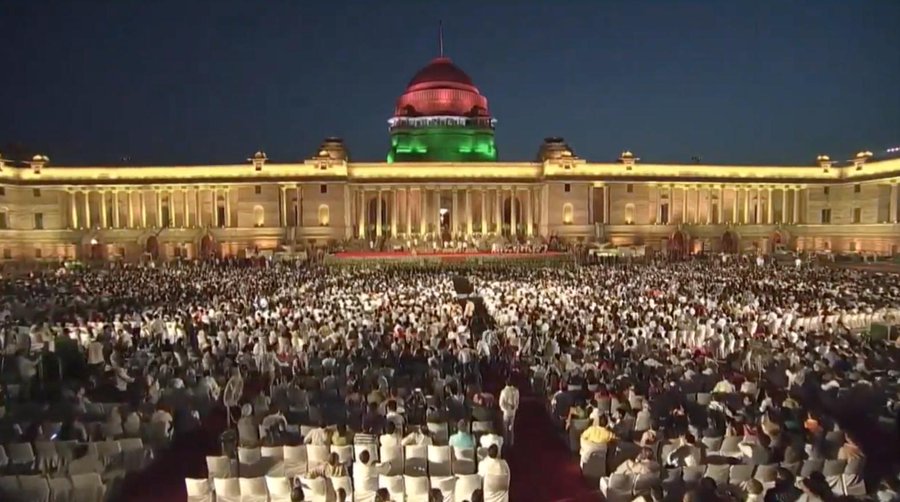 Attendees watch ministers of the Bharatiya Janata Party being sworn in on May 30, 2019, at the Rashtrapati Bhavan, New Delhi. Source: Twitter

The first non-BJP NDA leader to be sworn in was Ram Vilas Paswan of the Lok Janshakti Party. He was previously the minister for consumer affairs, food and public distribution. He is an eight time Lok Sabha and Rajya Sabha MP, who first became a minister in the V.P. Singh government in 1989.

Narendra Singh Tomar was also sworn in as cabinet minister. He was minister of rural development, minister of parliamentary affairs, panchayati raj and mines in the previous government.

Ravi Shankar Prasad, who defeated BJP-rebel Shatrughan Sinha in Patna Sahib, was again sworn in as a cabinet minister. He was the law minister in the earlier government.

From the Shiromani Akali Dal (Badal) – BJP’s oldest ally in the NDA – Harsimrat Kaur Badal, who had the food processing portfolio earlier, was re-inducted as a cabinet minister.

The BJP’s Madhya Pradesh leader Thawar Chand Gehlot also took oath as a cabinet minister. He was minister of social justice and empowerment in the earlier government.

Former Uttarakhand chief minister Ramesh Pokhriyal Nishank was also sworn in as a cabinet minister for the first time.

The third woman to be inducted into the Union Cabinet was Smriti Zubin Irani. She held the textiles portfolio in the previous government and had also defeated Congress president Rahul Gandhi in his family bastion of Amethi. 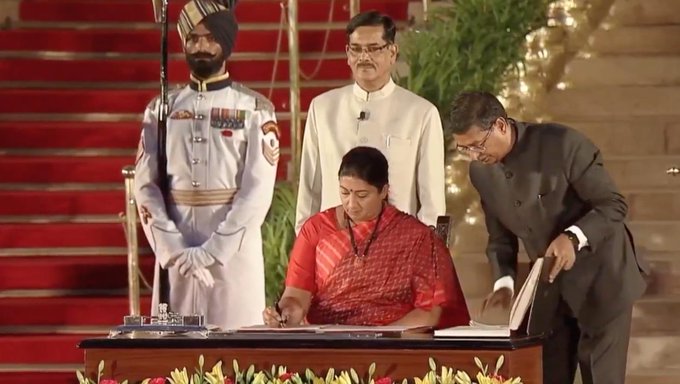 Smriti Irani being sworn in on May 30, 2019, at the Rashtrapati Bhavan, New Delhi. Source: Twitter

Senior Delhi politician Harsh Vardhan, who was minister for environment and forests and science and technology in the earlier government, was also given the cabinet rank.

Former BJP spokesperson Prakash Javadekar, who held the human resource development portfolio in the previous government, was also sworn in.

Dharmendra Pradhan, who was minister of petroleum and natural gas and skill development in the previous government, also took oath.

The BJP has also retained Mukhtar Abbas Naqvi, who was minister for minority affairs.

Former president of the BJP’s Karnataka unit, Prahlad Joshi, was also administered oath by the president.

Former minister in the Modi government and president of UP BJP, Mahendra Nath Pandey, was also inducted into the cabinet.

Arvind Ganpat Sawant of the Shiv Sena, who was chosen to represent his party in the government, also took oath.

Giriraj Singh, who was minister of state for micro, small and medium enterprises in the previous government, has also been given a cabinet rank.

Former minister of state for agriculture and farmer welfare Gajendra Singh Shekhawat has also been promoted to the Cabinet rank.

In May 2014, a total of just 46 ministers were sworn in. The council then comprised 24 cabinet ministers, ten ministers of state with independent charge and 12 MoS.

By the time the term ended, Modi seemed to move away from the slogan of ‘minimum government, maximum governance’. The size of his council ballooned to 70. At the last count, the first Modi government had 25 cabinet ministers, 11 MoS (independent charge) and 34 MoS.

This time, 25 cabinet ministers have been sworn in.