Modi's Mantra of the Local Does Not Extend to Localised Governance

In his last address to the nation, the prime minister was extremely vocal about being local. But, instead of showing faith in the idea of enabling economic growth from below, the top-down nature of the Centre’s stimulus package indicates just the opposite. 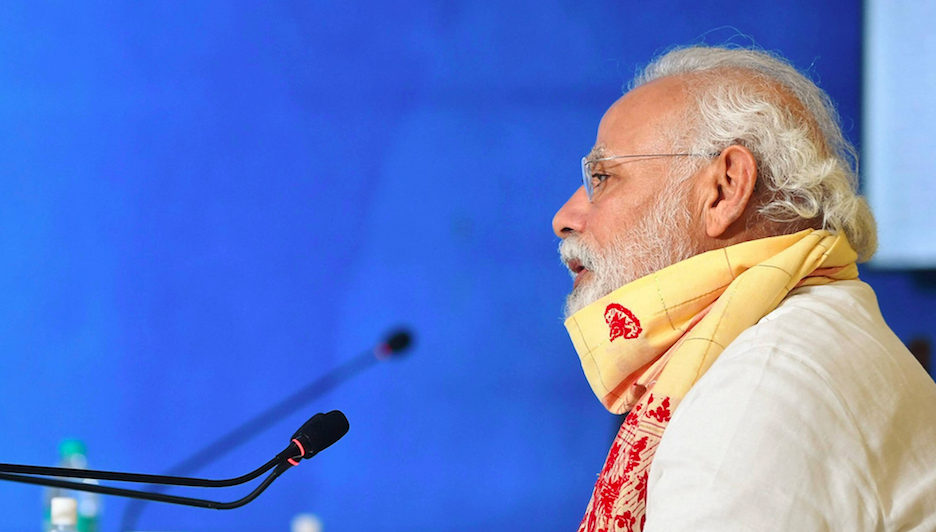 Narendra Modi on May 22. Photo: PTI

Prime Minister Narendra Modi’s May 12 address to the nation, which dwelt on his government’s Rs 20 lakh crore economic package to tackle the crisis brought upon by the pandemic-induced lockdown, began and ended with the same mantra – ‘local!’

Adding to the dramatic flair with which he uttered the mantra was the expressive gesture of his hands, which seemed to be delineating the local.

For many of us who strongly believe that the most effective way of  achieving economic and social change in a large and highly diverse nation like India would be through localised governance systems capable of capturing the skills of the community and responding to its economic landscape, this was a good beginning for a new package.

The ground was prepared more than 25 years ago. The Constitution (73rd Amendment) Act, 1992, or the Panchayati Raj Act,  was a brilliant move to implement this very notion that the local – starting with what it means – is perhaps the most effective method of not only designing a development programme but also implementing it.

It was through the 73rd and 74th Constitutional Amendments of 1992 that local self-governance was introduced in rural and urban India.

Also read: What Does Being ‘Vocal about Local’ Mean for India’s Global Trade Strategy?

Over the decades, however, the vitality of local self-government has been whittled away by the entrenched silo system in government – departments do not share goals, priorities, information, tools, and processes.

All that happens is that decisions taken at the central level as well as economic and financial packages are pushed down to the states and districts.

In the discourse on management, the silo mentality is believed to impact operations and reduce employee, even play a role in the overall failure of a company in terms of its products and work culture.

In government financing and designing of development packages, it has translated into a range of mishaps – be it inadequate funding that does not factor in specificities of local conditions or lack of accountability, leading to failed outcomes.

It was to remedy this malaise infecting development outcomes in India that the Panchayati Raj system was initiated with the 73rd Constitutional Amendment. Local self-government was meant to enable more appropriate designs as well as monitoring of economic and social development.

However, this devolution of power irked the bureaucracy, while the academic world had its own reservations about it.

Academics and commentators have always been overwhelmed by the entrenched class and caste hierarchies which become  stronger  as we move away from cities​.​ ​I​t is assumed that rural India is still living in another century, marked by all its  attendant  economic and social inequalities, with  landlords on the one hand, and brahmins and merchants on the other hand claiming most of the goodies of  development.

In this case, the apprehension in some quarters was that local self-government could end up deepening those inequalities.

For the bureaucracy, the idea of local self-government   was a pain in the neck. They would have to listen, modify their designs of development, and schemes. They would be at the tail-end of the development process, not at the beginning.

Further, aspects like the intricacy of the budget – making sure that grants were well-crafted and well implemented – seemed a challenge for elected panchayat members who were not exposed to administrative training in these kinds of highly intricate designs (at one time, when I was a member of the Karnataka government planning board, I found that there were 540 ‘schemes’, or grant packages, directed towards the poor, the scheduled castes and scheduled tribes in a district).

​The way the bureaucracy saw it, they ​were found not to be competent.

Although the elected panchayat members were citizens who were supposed to design and implement local development, the task inevitably fell on the bureaucracy, whether it was a block development officer at the block level or  the development secretary, Panchayati Raj, all the way up.

Soon the 73rd Constitutional Amendment was being overlooked if not sidelined. To illustrate, if one looks at the Tenth and Eleventh Plan’s chapters on rural development or even women and development, or any of the major sectors of ​development, this local self-governance institution does not feature in it at all.

The scheme, or what is called the pattern of assistance, is usually designed at the Centre during the plan- preparation process and then plugged into the funding system. From there the funding goes to the states departmentally.

It is then up to the state government to ensure that the 73rd Amendment Act is respected, and that some degree of inclusion is provided at the local level to persons elected to the panchayats. In actual fact, it is not necessary in the sense that the scheme is ready to be delivered.

A suggestion was made that it would be better to give untied funds, i.e., funds not earmarked for any particular purpose and that the earmarking of funds should be decided initially by the gram panchayat, going upwards  to the district panchayat.

Therefore, when the prime minister uttered the mantra ‘local!’ some revival of spirit took place in the hearts and minds of people of an earlier era, and it was hoped that local communities and local areas would define their needs and funding would go according to their design.

Then came the smart ministries – obviously, the smartest one at this time​ being the Union finance ministry.

With its COVID-19 relief package crafted like a pack of laddoos ready to be handed out, the finance ministry has come back to schemes that are ready to be administered.

Among them is one major outlay which concerns the revival of micro, small and medium sized firms (MSMEs) that have been severely hit by the lockdown. Another package, announced earlier, offers free food grains to the poor and cash payments to women, the elderly and farmers for a three-month period ending June.

What is clear about these packages is their top-down approach. The dramatic flourish signifying the local notwithstanding, Prime Minister Modi’s hands are pointing once more towards the Centre.

Come to think of it, how could it have been any different?

Alas! the excitement of the promise that the prime minister’s words appeared to contain evaporated when it came to its articulation by finance minister, Nirmala Sitharaman, and Minister of State for Finance, Anurag Thakur, more popularly known as the ‘goli maaro‘ minister (in the course of campaigning for the Delhi Assembly elections earlier this year, he raised a slogan advocating the shooting – ‘goli maaro’ – of traitors).

I hope that this ‘goli maaro’ aspect does not get translated into shooting money only into the pockets of the high profile private sector,  or directing it solely through the  top-down channels of central and state power to ‘the poor’ rather than  enabling the localising of  governance and building economic growth from below – local to global.

Is the Modi government willing to take a shot at it?

Devaki Jain is a former member of the Karnataka state planning board and several task forces on rural development set up by the central government. She can be reached at devakijain@gmail.com.