New Delhi: In a major overhaul of tax administration, Prime Minister Narendra Modi on Thursday unveiled faceless tax assessment and appeals to reduce the scope for corruption and overreach by officials, and said a taxpayers’ charter is being implemented to ensure a free, fair and transparent tax environment.

Launching the “Transparent Taxation – Honouring The Honest” platform through video conferencing, Modi said the taxpayer base, at just 1.5 crores in India, is very low and urged those who owe taxes to come forward and honestly pay their dues and contribute to nation-building.

The taxpayers’ charter and faceless assessment are the next phases of direct tax reforms aimed at easing compliance and rewarding honest taxpayers as the government looks to rebuild the pandemic-hit economy.

While faceless assessment, which does not require the taxpayer to visit any office or meet any official, and taxpayers’ charter will be implemented from Thursday, the faceless appeal will come into force from September 25, he said.

“The tax system may be turning faceless but it promises fairness and fearlessness for taxpayers,” he said.

Modi said that until now, the tax office in the city of residence was handling the scrutiny, appeal and notices of an individual taxpayer.

Now, a central computer will pick up tax returns for scrutiny based on risk parameters and mismatches, and then will allot them randomly to a team of officers in any city. The scrutiny by these officers will be reviewed by officers at another randomly selected location.

Notices, if any, will be sent only by a centralised computer system, and the taxpayer can respond to them electronically without the requirement of visiting a tax office or meeting any official.

This, Modi said, will end the era of “jaan pehchan” (acquaintance) to get scrutiny or notices settled.

The prime minister said taxpayers’ charter provides for fair, courteous and reasonable treatment while treating taxpayers as honest. It expects taxpayers to be honest and compliant, and pay taxes in time.

While the number of people filing income tax returns has increased by about 2.5 crores in the past few years, the actual number of taxpayers –1.5 crores – out of a population of 130 crores “is very very less,” he said.

“Those who are capable must voluntarily come forward and pay their dues and contribute to the development of the nation,” he said.

Modi said that economic reforms in the past were done under compulsions or pressure which did not yield desired results.

“For us reforms mean reforms based on policy, reforms that are holistic and not piecemeal and one reform forming the base for other,” he said. “Reform is a continuous process.” 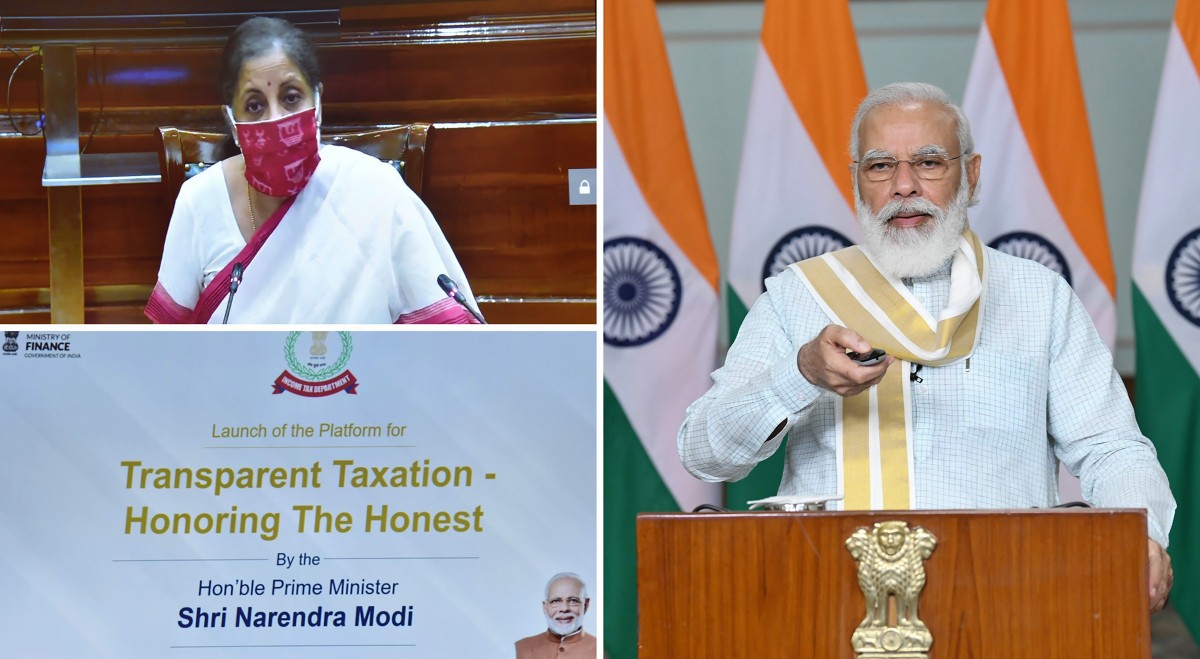 The tax system needed fundamental and structural reform because it was brought in when India was under colonial rule, he said.

“Compliance becomes difficult where there is complexity,” he said adding laws should be less in number and should make taxpayers happy.

“We brought in ‘Vivaad Se Viswas’ scheme so that maximum cases get resolved outside court. As a result, in a short time, about 3 lakh cases were resolved,” Modi said.

Listing taxation reforms undertaken by his government since 2014, Modi said the Goods and Services Tax amalgamated dozens of taxes, thresholds fixed for pursuing tax matters in different courts and a dispute resolution scheme brought in to reduce litigation.

Also, the tax rate has been reduced. “There is no tax on income up to Rs 5 lakh (for individuals). Tax slabs for income higher than Rs 5 lakh have also been reduced. India is now among the nations with lowest corporate tax,” he said.

Also read: Five Things the Second Modi Government Can Do to Fix the Economy

“Attempt has been that the tax system should be seamless, painless, and faceless,” he said.

The prime minister said his government’s reforms in the last six years have focused on banking the unbanked, securing the unsecured and funding the unfunded.

“Today is the beginning of a similar journey,” he said.

Three main features of the platform unveiled on Thursday are faceless assessment, faceless appeal and taxpayers’ charter, he said adding the focus is on making the tax system “people-centric and public friendly.”

Four factors for changes in the taxation system are due to policy-driven governance, belief in people’s honesty, the use of advanced technology and efficiency in the bureaucracy, according to Modi.

Finance minister Nirmala Sitharaman, while presenting the budget for 2020-21, had announced a ‘taxpayers’ charter’ to empower citizens by ensuring time-bound services by the Income Tax (IT) department.

The government has undertaken various tax reforms during the last six years including a reduction in corporate tax last year from 30% to 22% for existing companies and 15% for new manufacturing units, scraping of dividend distribution tax and faceless assessment.

The IT department has also taken several tax-payer friendly measures over the years. It launched the direct tax ‘Vivad se Vishwas’ scheme to expedite the resolution of pending tax disputes.

The income tax department has simplified compliance norms for startups and has moved forward with the pre-filling of income tax returns to make compliance more convenient for individual taxpayers.

Currently, most of the functions of the Income Tax department starting from the filing of the return, processing of returns, issuance of refunds, and assessment are performed in the electronic mode without any human interface.