In his petition before the Supreme Court, Manish Kumar Sinha alleges that the national security advisor intervened to ensure the CBI's investigators did not collect the mobile phones of Rakesh Asthana and Devender Sharma as evidence. 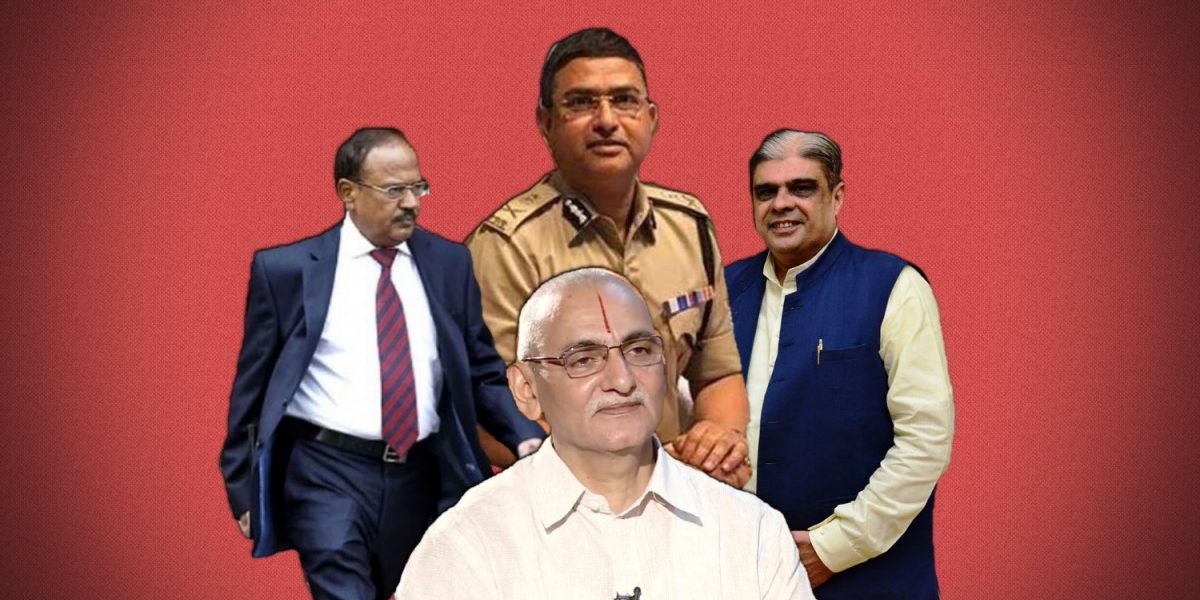 New Delhi: A senior officer from the Central Bureau of Investigation who was “unjustly” transferred the day the Modi government ousted director Alok Verma has alleged in a petition to the Supreme Court that Union minister of state for coal and mines Haribhai Parthibhai Chaudhary received “a few crores of rupees” in the “first fortnight of June 2018” as part of the ‘extortion racket’ being run by certain officers investigating the Moin Qureshi case.

He has also accused national security advisor Ajit Doval of blocking crucial investigations into the matter.

On Monday, Central Bureau of Investigation DIG Manish Kumar Sinha filed a petition seeking to intervene in the ongoing case filed by CBI director Alok Verma. Sinha, who was shunted out to Nagpur by the acting CBI director on October 24, said his transfer was “arbitrary, motivated and mala fide, and was made solely with the purpose and intent to victimise the officer as the investigation revealed cogent evidence against certain powerful persons.”

On October 23, Sinha says he was informed by DIG/DD (SU) – the head of the CBI’s phone surveillance division – that a person had spoken spoke to Samant Goel (a senior R&AW official who was also identified in the CBI’s FIR) “and asked to help him to which Samant Goel replied that things have been managed with PMO and everything is fine. The same night the entire investigating team was shifted.”

Doval under the scanner

Apart from alleging that a minister of state in the Modi government is involved in the bribery-cum-extortion scandal, Sinha, in his petition, has also put on record the allegedly close ties national security advisor Ajit Doval has with Manoj Prasad and Somesh Prasad – two Dubai-based middlemen caught up in the Moin Qureshi case.

His petition also alleges that Doval intervened at a crucial moment in the CBI’s investigation into special director Rakesh Asthana and DSP Devender Kumar to ensure that their mobile telephones – which contained evidence of WhatsApp messages exchanged – were not seized as evidence.

“When the IO/Shri AK Bassi came to know that Shri Samant Goel / Shri Somesh had stopped talking and were exchanging Whatsapp Messages, he insisted that we need the cell phone sets of the public servants as the evidence is likely to be stored on the device and that a search be conducted. The Director CBI did not give immediate permission and reverted that the NSA has not permitted the same.

“This oral request continued for 2/3 days. Ultimately, the proposal seeking permission to search was put on record by the IO on 22.10.2018. However, the same was not allowed and a query was raised by the Director as to why the searches are to be done.

“Upon being queried, the Director/Petitoner herein replied that he was not getting clearance from the NSA/Shri Doval.”

According to Sinha’s petition, the minister, who is also an MP from Gujarat, was allegedly paid through one Vipul from Ahmedabad. On further inquiry, the CBI discovered that there were calls intercepted by another central agency in the first fortnight of June wherein there is talk between K. Laxma Reddy, a Congress MLA from Hyderabad and businessman Sana Satish Babu, about money to the tune of Rs 2 crore being sent.

The minister did not respond to a brief questionnaire put to him by The Wire.

In what can be a damaging blow to the credibility of Central Vigilance Commissioner K.V. Chowdary as an impartial investigator in the battle between Verma and Asthana, the CBI officer also says that Sana met the CVC in Delhi along with Gorantala Ramesh, a relative of the CVC, and discussed the Moin Qureshi case with him.

Chowdary’s relative was apparently mixed up tangentially in the Moin Qureshi matter, having paid Sana some money for a land deal around the same time as the latter made a payment to Moin Qureshi. Sana claimed to the CBI that after that meeting, the CVC called Rakesh Asthana to his residence and made inquiries and Asthana assured him that there wasn’t much evidence against them. “There is no illegality in this, but the same is put on record here for the sake of completeness,” Sinha’s petition notes.

The Wire reached out to Chowdary for his response to this account. “The matter is before the Supreme Court,” he said. “It would be inappropriate to communicate with the media in this regard.”

Boasts about friends in high places

Sinha says that when Manoj Prasad was arrested by the CBI, he was “garrulous and arrogant” and dropped the names of the “high and mighty” and “top contacts” to “create fear” in the minds of the investigators.

Putting Manoj Prasad’s conversation with the investigating team on record, Sinha says that as per the middleman, his father, Dineshwar Prasad, who used to work in the Research and Analysis Wing, has a “close acquaintance with NSA Ajit Doval.”

Manoj also said his brother Somesh is very close to an officer in Dubai and to Samant Goel, presently special secretary R&AW, and that he could get the CBI officers “kicked out” and “finished.” According to Prasad, his brother Somesh and Samant Goel helped the NSA on an “important personal matter”. He also claimed India opted out of the contest from Interpol.

The CBI made discreet inquiries on Prasad’s claim on Interpol and found them to be correct. Sinha says all the evidence on that will be available on record.

When the CBI wanted to probe the role of top government officials in touch with the middlemen from Dubai, the permission for the same was denied by the NSA.

The officer also reveals how call records and mobile tower locations were proof that Asthana and Samant Goel had met with middleman Somesh Prasad. The Wire had reported this earlier.

“SIT vs Centre for Bogus Investigation and Extortion Directorate”

Sinha’s petitition asks the Supreme Court to appoint a Special Investigation Team to probe the case. “L‘affaire Sana is symptomatic of a larger deep-rooted malaise in the country’s premier investigation agency – the CBI.

“The Applicant is troubled by the contents of Shri Sana’s allegations, which if proved to be true, reflect very poorly on our criminal justice delivery system in general and the CBI in particular.

“The Moin Qureshi case can be taken as an example – the said case was registered sometime in Jan/Feb 2017 and is still under investigation, even after more than one and half years. Shri Sana himself was called on multiple occasions by CBI and Enforcement Directorate (“ED”). The ED did not charge sheet him but made him a witness. This indicates that he may not be the central player in the Moin Qureshi case. However such open ended investigations give ample scope to unscrupulous elements to indulge in illegal or undesirable activities. There is a pressing need to fix a timeline for investigation of such cases so that premier investigating agencies such as Central Bureau of Investigation doesn’t becomes “Centre for Bogus Investigation” and Enforcement Directorate doesn’t becomes “Extortion Directorate”.”

Why Sana spoke out

Sinha said that the only reason Sana stepped forward to make his complaint was probably because “he was stopped from going abroad on 25th night at Hyderabad Airport in presence of his family which hurt his sense of self-respect  (and)  that he was assaulted by the IO Shri Devender Kumar on 1st Oct and 3rd Oct at CBI Head office (as disclosed by Shri Sana).”