The Nobel laureate, who had been critical of the Modi government, has praised Ayushman Bharat. 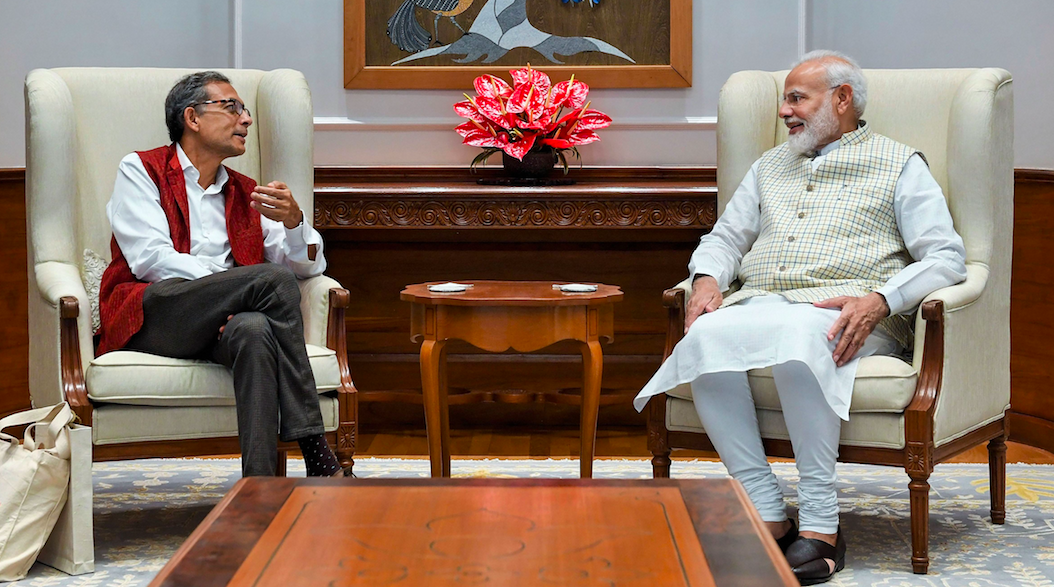 Prime Minister Narendra Modi and Nobel laureate Abhijit Banerjee, who won the Nobel Prize for Economics this year, during a meeting at the PM's residence, in New Delhi. Photo: PTI

Banerjee, who has been critical of the Modi government’s economic policies told reporters that Modi joked with him about the media allegedly trying to get anti-Modi remarks out of Banerjee.

Banerjee has, over the years, been forthright in his criticism of some of the economic policies of the Modi government. He, along with Esther Duflo (who he shares the 2019 Economics Nobel with, along with Michael Kremer), has raised objections over everything from demonetisation and the GST to the manner in which the Centre has handled official statistical data.

Banerjee calling his meeting with Modi a “unique experience”. He said the prime minister spoke on governance and bureaucracy with him.

“It was a privilege to have this meeting with the prime minister. The prime minister was kind enough to give me quite a lot of time and to talk a lot about his way of thinking about India which was quite unique,” Banerjee was quoted as having told the media.

The Nobel laureate also praised the BJP-led central government’s flagship Ayushman Bharat Yojana after meeting the prime minister and said that schemes like these are necessary to ensure that entire families are not crippled when one among them falls ill.

The Ayushman Bharat Yojana was launched in September 2018 and aims to fulfil the medical needs of 10 crore poor and lower-middle-class families through a health insurance plan providing a cover of Rs 5 lakh per family.

The Nobel winner has been expressing his concerns over the banking crisis in the country and has called it “serious and frightening”. He has also said the economic slowdown poses some very serious concerns.

Banerjee has been facing criticism from leaders of the ruling government for his views about the country’s economic policies. Union minister Piyush Goyal had recently called him “totally Left-leaning” and said that the economist’s views had been rejected by the people of the country.

BJP national secretary Rahul Sinha had made a disparaging comment indicating that the Nobel was awarded only to those whose second wives were foreigners. Banerjee, reacting to these comments, had said that it was upsetting to see the BJP make such personal attacks.

Banerjee, a 58-year-old India-born American professor at Massachusetts Institute of Technology has won the economics Nobel with wife Duflo, and Kremer for “an experimental approach to alleviating global poverty“.

Soon after the meeting, the prime minister tweeted that he had an “excellent meeting” with Banerjee.

Excellent meeting with Nobel Laureate Abhijit Banerjee. His passion towards human empowerment is clearly visible. We had a healthy and extensive interaction on various subjects. India is proud of his accomplishments. Wishing him the very best for his future endeavours. pic.twitter.com/SQFTYgXyBX