The police said that it is investigating whether the incident was a case of mistaken identity. 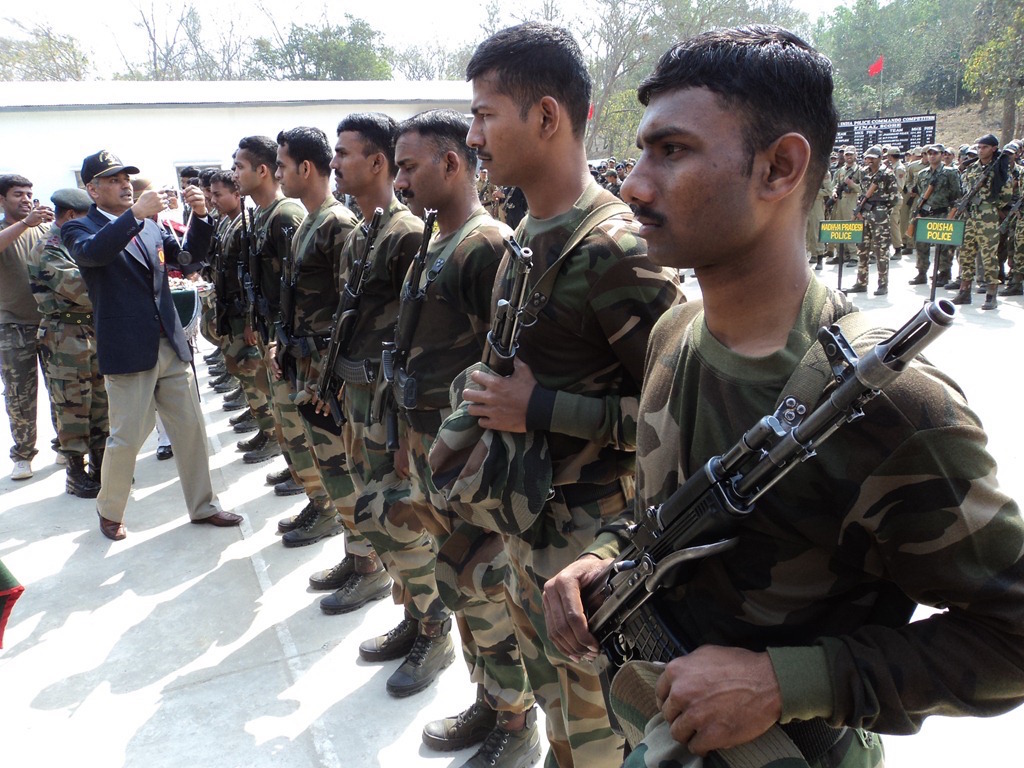 File photo of Assam Rifles soldiers in Assam. Though the Army is yet to issue a statement, Assam Rifles has denied its involvement in the incident.. Credit: kararnivang.com

New Delhi: At least 13 civilians have been gunned down by security forces in Nagaland’s Mon district, police said on Sunday, adding that it is investigating whether the incident was a case of mistaken identity.

The Army’s 3 Corps on Sunday issued a statement, owning up responsibility for the killing of the civilians, adding that one soldier too had died in the operation carried out against insurgents in the area bordering Myanmar. It said a court of inquiry would probe into the matter.

In the statement, PRO (defence) Kohima unit, Lieutenant Colonel Sumit K. Sharma, said, “Based on credible intelligence of likely movement of insurgents, a specific operation was planned to be conducted in the area of Tiru, Mon district, Nagaland. The unfortunate loss of lives is being investigated at the highest level  and appropriate action will be taken as per the course of law.”

Lieutenant Colonel Sharma said, “The security forces have suffered severe injuries in the incident including one soldier who succumbed to the injuries.”

Following the incident, the government of Nagaland has also suspended internet connection in Mon district with immediate effect. 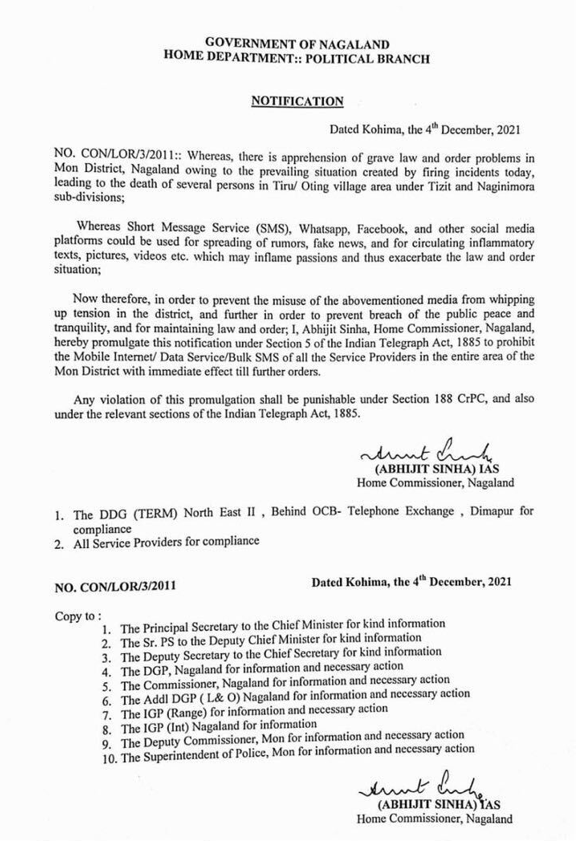 Separately, a BJP leader in Nagaland has alleged that Indian Army personnel fired at him and killed one of his companions on Saturday, while they were on the way to the area where the security forces had killed coal miners returning from work, Scroll reported.

Nyawang Konyak, the president of the BJP’s Mon district unit, said he rushed towards the spot when he heard that six people from his village Oting had been killed by the armed forces.

The report said that the BJP leader was accompanied by his driver, his nephew and a neighbour. They stopped at a “rest camp” to make enquiries, and as they were speaking, the armed military men charged at them and opened fire indiscriminately.

“They were joyously firing at us,” Scroll reported him as saying.

All three men accompanying him were wounded in the firing, and one of them, his neighbour, eventually succumbed to the bullet injuries, Konyak told Scroll. Another civilian was also killed in this round of firing.

He also expressed disappointment that the soldiers continued to fire at him and his companions despite his vehicle’s bonnet bearing the BJP flag, the report added.

Union home minister Amit Shah expressed condolences to the families of those who have lost their lives and promised that a “high-level SIT” has been set up by the state government to probe the killing.

“Anguished over an unfortunate incident in Nagaland’s Oting, Mon. I express my deepest condolences to the families of those who have lost their lives. A high-level SIT constituted by the State govt will thoroughly probe this incident to ensure justice to the bereaved families,” the home minister tweeted.

Anguished over an unfortunate incident in Nagaland’s Oting, Mon. I express my deepest condolences to the families of those who have lost their lives. A high-level SIT constituted by the State govt will thoroughly probe this incident to ensure justice to the bereaved families.

According to a report in Ukhrul Times, the civilians were coal miners from nearby Oting and were returning from Tiru in a pick-up van when the incident took place around 4 pm. A search party of villagers went out on Saturday night looking for them since they didn’t return home and found their bodies on the truck. The report said angry villagers set on fire a number of vehicles belonging to Assam Rifles.

According to state police, the vehicle carrying the villagers was allegedly fired upon by Army officers, who were conducting an operation in the area after receiving inputs on the movement of militants of the Yung Aung faction of proscribed outfit NSCN (K). Local police officials told reporters that the situation is under control and police is conducting spot verification.

The New Indian Express reported, citing sources, that the officers, said to be para commandos, reportedly mistook the victims as militants and ambushed them.

Mon shares a porous international border with Myanmar, where the Yung Aung faction of NSCN (K) is based.

Meanwhile, the Eastern Nagaland Public Organisation (ENPO) has urged six tribes under the organisation to abstain from further participation in the ongoing Hornbill Festival.

S. Zhevami Sumi, president of Sumi Hoho, the apex body of the Sumi Naga tribe, also asked “all individuals and groups” from his community to “skip participating in the Hornbill Festival till further notice”. 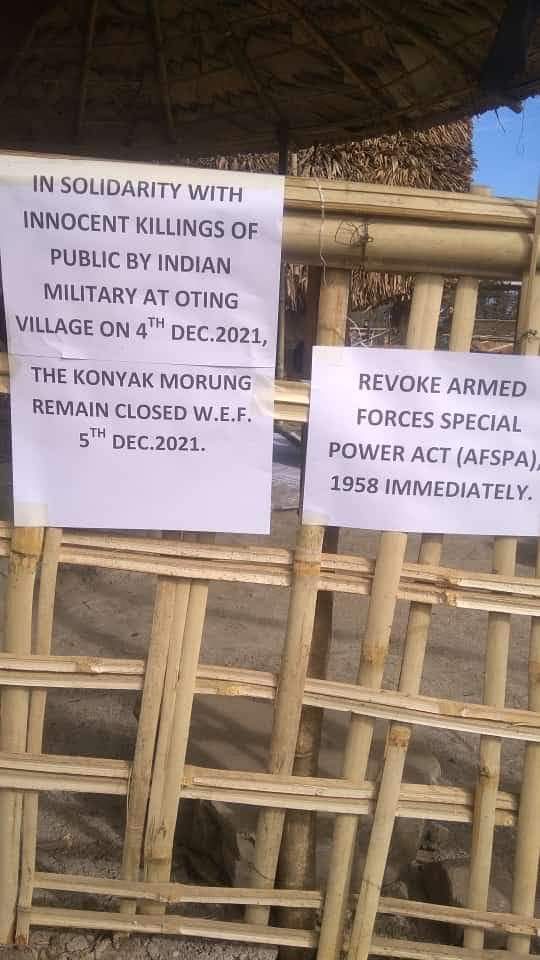 The traditional bachelor congregation area (Morung) of the Konyak tribe built at the Hornbill Festival in Kisama, Kohima, shut down on December 5 morning in protest against the killing of civilians in Mon district on December 5 evening.

Reacting to public outrage, chief minister Neiphiu Rio tweeted condemning the incident and announcing the high-level Special Investigation Team (SIT) to probe into the incident which the Union home minister also referred to in his tweet. Rio appealed to all sections of the society to maintain peace. He further said that “justice will be delivered as per the law of the land”.

The unfortunate incident leading to killing of civilians at Oting, Mon is highly condemnable.Condolences to the bereaved families & speedy recovery of those injured. High level SIT will investigate & justice delivered as per the law of the land.Appeal for peace from all sections

“Oting’s (Mon) disturbing and tragic incident in which civilians were killed will be thoroughly investigated and justice will be served. Condolences to the bereaved families and prayers for the speedy recovery of the injured. In the wake of the tragedy, I urge peace from everyone!” he tweeted.

Congress leader Rahul Gandhi on Sunday attacked the Union government over the incident, saying the government must give a “real reply” as to what is the home ministry doing when “neither civilians nor security personnel are safe in our own land”.

This is heart wrenching. GOI must give a real reply.

What exactly is the home ministry doing when neither civilians nor security personnel are safe in our own land?#Nagaland pic.twitter.com/h7uS1LegzJ

This story was published on December 5, 2021 at 10:49 am and was updated with more information.