In the past four years, nearly twice the number of illegal Bangladeshi migrants were caught leaving the country than those coming in illegally. 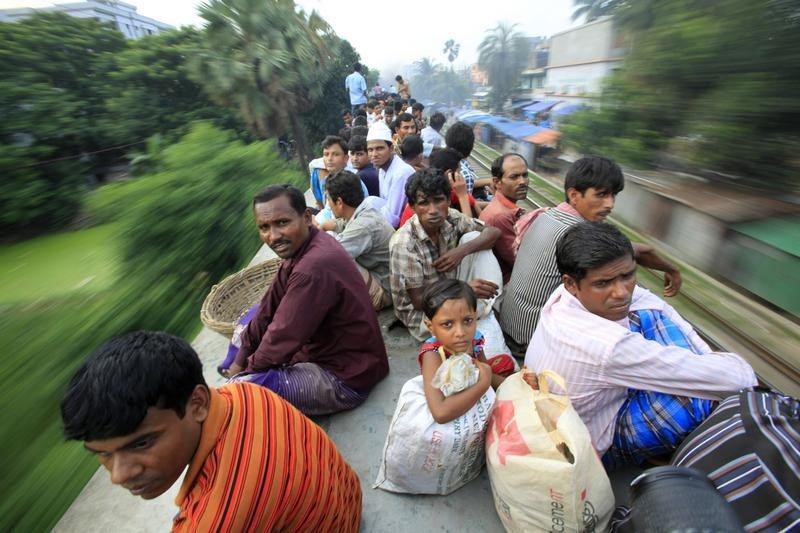 Many from Bangladesh migrate in search of livelihood opportunities and better life. Pictured above are passengers atop an overcrowded train as it heads for Jamalpur from Dhaka August 16, 2012. Photo: Reuters/Andrew Biraj/Files

New Delhi: The number of illegal Bangladeshi migrants caught leaving India has been double that of those who have entered the country by illegal means in the past four years, as per data disclosed by the Border Security Force (BSF) and the National Crime Record Bureau (NCRB), and reported on by The Hindu.

Until December 14, 2020, the BSF apprehended 3,173 illegal migrants when they were attempting to cross over to Bangladesh. On the other hand, 1,115 persons were caught by the security forces when they trying to make their way into India through illegal means in the same period.

The number of ‘out-migrants’ leaving the country could be more as there are instructions to avoid paperwork and documentation for them, The Hindu quoted a senior government official as saying. There is also an expectation that this number could be even higher as the out-migration has increased after the outbreak of the COVID-19 pandemic and the lack of work.

“If they are apprehended, we let them go back. If they are arrested, it leads to lengthy legal procedures and the illegal migrants then have to be placed in a shelter or detention home till their nationality is proved,” the newspaper quoted a senior official as saying on the condition of anonymity.

Between August 1 and November 15, 2020, as many as 50 Bangladeshis who had entered India inadvertently were handed over to the Border Guards Bangladesh (BGB) as part of a goodwill gesture and in the reflection of improved bilateral ties, the official added.

Meanwhile, the BSF is organising an event on Wednesday, December 16, at the South Tripura-Bangladesh border to mark the 50th anniversary of India’s victory in the Bangladesh Liberation War. India shares a 4096.7 km border with Bangladesh with large porous stretches.

On Thursday, December 17, Prime Minister Narendra Modi and his Bangladesh counterpart Sheikh Hasina will discuss bilateral matters in a virtual summit, the first such event being held since the enactment of the Citizenship Amendment Act (CAA) last year.

Also read: CAA an Internal Matter, But Don’t Understand Why India Did it: Bangladesh PM

On the issue of CAA and the National Register of Citizens (NRC), although Hasina has maintained that they are “internal matters” of India, several high-level talks between India and Bangladesh have been cancelled from Bangladesh end after the enactment of CAA legislation.

It may be recalled that on March 3, Union minister of state for home, Nityanand Rai, had said in a written reply in Lok Sabha that some infiltrators from Bangladesh were able to enter India in a surreptitious manner, mainly due to difficult riverine terrain in parts of the international border with Bangladesh which are not amenable to physical fencing.