Congress, AAP Express Outrage as Morbi Hospital Gets 'Makeover' Ahead of PM's Visit

The hospital's entry gates and some areas inside were re-painted, new tiles were placed on some walls, new water coolers were kept in place and bedsheets of wards where the bridge collapse victims are undergoing treatment were changed, according to reports. 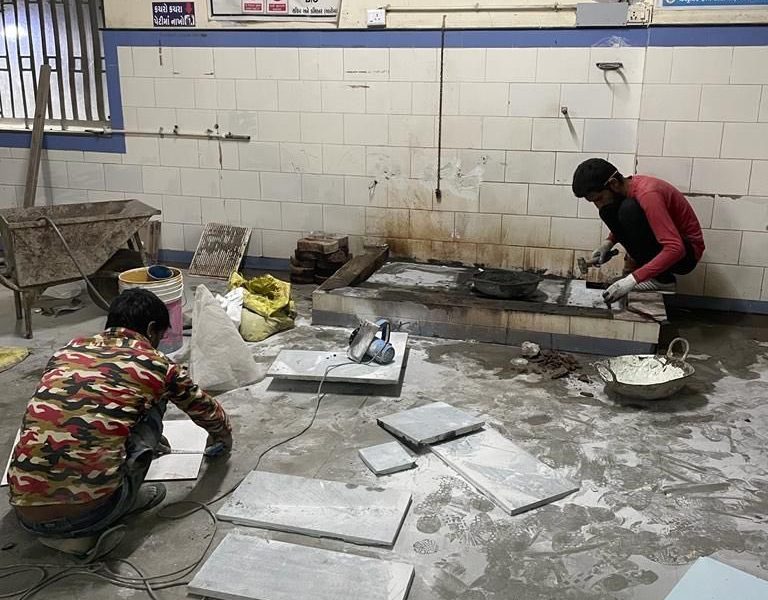 An image tweeted by the Congress party, purportedly showing the insides of the Morbi hospital where ahead of PM Modi's visit, retiling work is allegedly seen taking place. Photo: Twitter/@INCIndia

New Delhi: Uproar by opposition parties Congress and Aam Aadmi Party has drawn attention to what reports have said were nightlong efforts to clean and decorate a civil hospital where some victims of the Morbi bridge collapse are being treated ahead of Prime Minister Narendra Modi’s visit today.

Sunday’s suspension bridge collapse at the Gujarat city has claimed 141 lives, according to reports.

NDTV has reported that its ground reporters visited the hospital to find that a “huge post-midnight makeover” was in progress to prepare the hospital for Modi’s visit.

Workers were seen cleaning and painting a portion of the 300-bed hospital, which is a two-storey structure of three wings, PTI additionally reported.

Six of those injured in the collapse are undergoing treatment at the hospital, while four to five other injured are being treated at a private hospital, PTI quoted a doctor as having said. So far, 56 people have been discharged, he added.

NDTV, however, reported that the number of those admitted at the hospital was more, around 13.

Portions of the entry gate have been painted in yellow, while some areas inside the hospital have got a coat of white paint. In addition, minor construction work, including the placing of new tiles on the walls, has taken place, according to PTI.

NDTV reported further that new water coolers were brought in, bedsheets in the two wards where the bridge collapse victims are undergoing treatment were changed, and that there was a “massive clean-up”.

While the hospital underwent what was reportedly a preparatory clean up, reporters from NDTV spoke to a man who was at the hospital looking for his missing family members. “I have searched high and low in the hospital, but no one is helping,” Vinod Dapat said.

Congress and AAP both tweeted images that showed repair work going on inside the hospital.

“They are not ashamed. So many people died, and they are preparing for an event,” Congress said.

In addition to still photos, AAP also posted a video of the hospital being painted.

“Morbi civil hospital is being painted overnight so that the poor condition of the building does not get exposed during PM Modi’s photoshoot,” AAP wrote.

Assembly elections will be held soon in the state, prompting quick assurances from the ruling BJP and loud demands for investigation and reparations from opposition parties.