'Misconduct': 19 Opposition MPs Suspended From Rajya Sabha for a Week for Entering Well of House

Congress MP Jairam Ramesh alleged that the Modi government does not want to discuss the "real, urgent" issues; TMC MP Derek O'Brien said that "democracy has been suspended".

New Delhi: The stand-off in Parliament between the Opposition and the Bharatiya Janata Party (BJP)-led government over a discussion on the issues of rising prices and the imposition of the Goods and Services Tax (GST) on items of daily use continued for the seventh day on Tuesday, July 26.

Further, the Opposition accused the Union government of misusing central agencies, particularly in view of the ongoing questioning of Congress chief Sonia Gandhi by the Enforcement Directorate (ED), and forced adjournments in both the Lok Sabha and Rajya Sabha.

In Rajya Sabha, 19 MPs suspended for the week

Meanwhile, in the Rajya Sabha, a record 19 MPs were suspended for the week for holding protests that were deemed to amount to “misconduct” by chairman M. Venkiah Naidu . Incidentally, these suspension took place when Congresss members were absent from the House and protesting outside against the ED’s questioning of Gandhi.

On Monday, Rajendra Agarwal, who was presiding over the Lok Sabha, had suspended four Opposition MPs for displaying placards and disrupting House proceedings. These four Congress MPs – Manickam Tagore, Jothimani, Ramya Haridas and T.N. Prathapan – today held a protest near Mahatma Gandhi’s statue in the Parliament complex where several other MPs joined them in a show of solidarity. 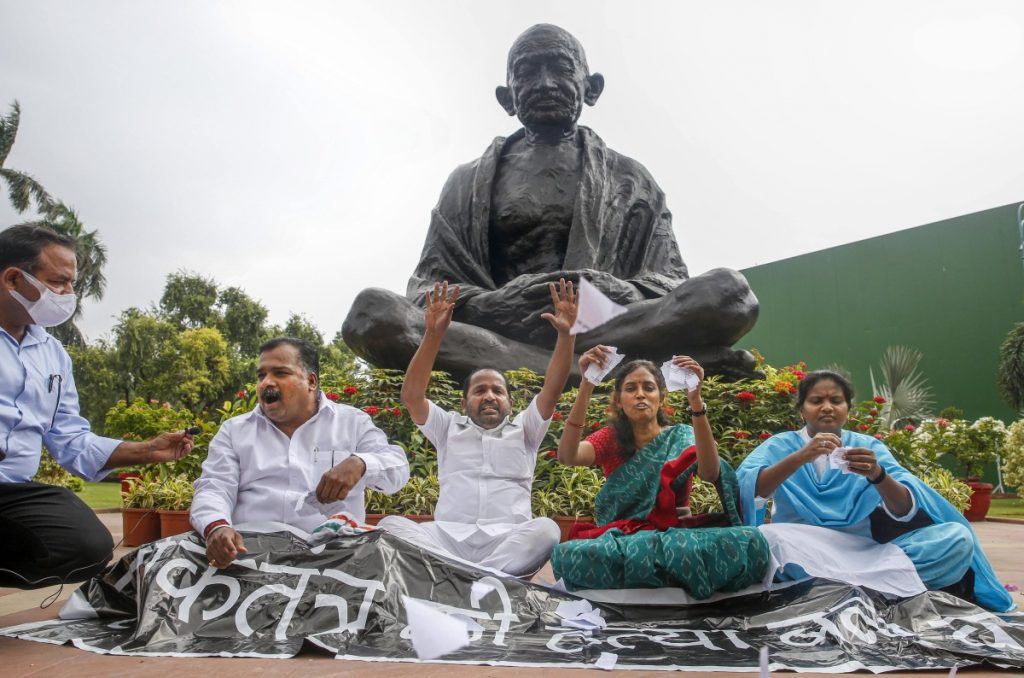 In the Rajya Sabha, as soon as proceedings began, there were loud protests by Opposition members over several issues, including the GST, rising prices, and the misuse of central investigating agencies.

As the House assembled, several members raised ‘Roll back GST’ slogans. In view of the protest, the chair first adjourned the house until 12 noon. Thereafter, the house was again adjourned for 15 minutes as protests continued.

When the proceedings resumed, deputy chairman Harivansh, who was in the Chair, urged the members to return to their seats. “Please go back to your seats. The whole nation is seeing that you are not letting the house function,” he was heard saying. Thereafter, the house was adjourned till 2 pm.

Most suspended MPs from TMC and DMK

When the house re-assembled and the Opposition members continued to protest, the Chair suspended 19 of them for the week for entering the well of the house, citing “misconduct”.

Apart from them, five MPs of DMK – Kanimozhi N.V.N Somu, M. Mohamed Abdulla, S. Kalyanasundaram, N.R. Elango and M. Shanmugam – were among those suspended, as well as three of the Telangana Rashtra Samithi (TRS) – B. Lingaiah Yadav, Ravichandra Vaddiraju and Damodar Rao Divakonda; two from the Communist Party of India (Marxist) – V. Sivadasan and A.A. Rahim; and one from the CPI – Sandosh Kumar.

Also read: Explainer: Why 12 RS MPs Were Suspended and Why Opposition Feels This Is Unconstitutional

This was one of the few times in the recent past where such a large number of MPs were suspended from a house of Parliament. The last such large-scale suspension had taken place in January, 2019 when erstwhile Lok Sabha Speaker Sumitra Mahajan had suspended 45 MPs of the TDP and AIADMK for disrupting House proceedings.

‘Modi Sarkar in no mood to discuss real issues’

Following the suspensions, Congress leader Jairam Ramesh tweeted that the move showed that the Modi government was in no mood to allow the Opposition to raise “real, urgent issues”.

With the suspension of Opposition MPs from both the Lok Sabha and Rajya Sabha, it is abundantly clear that Modi Sarkar is no mood to allow the Opposition to raise REAL, URGENT issues being faced by the people of our country in Parliament.

MPs have been suspended. BUT BJP GOVT HAS SUSPENDED PARLIAMENTARY DEMOCRACY.

Who benefits when parliament is disrupted? The Govt, because then they are accountable to no one.#Parliament is not the Gujarat Gymkhana.

Link to Presser for @AITCofficial 👇https://t.co/PgKdPoLzfb

Ahead of the proceedings of the seventh day of the Monsoon Session, leaders of various Opposition parties met in the chambers of the Leader of Opposition in the Rajya Sabha, Mallikarjun Kharge.

Following the meeting, Congress leader Ramesh said since a debate under Rule 267 has been held on several previous occasions to discuss important issues such as demonetisation, Jammu and Kashmir and the agricultural crisis, the Opposition wants it to be invoked for discussing GST and the price rise.

“Entire Opposition is demanding an urgent debate on price rise and GST in Rajya Sabha under Rule 267. The rule has been invoked a number of times, most recently on 16.11.16 to debate on demonetisation, on 10.08.16 to discuss Jammu and Kashmir, and on 23.04.15 to debate on agrarian crisis. Why is the Modi government refusing now?” he asked.

Thereafter, as the proceedings began in the Lok Sabha, members of the Opposition demanded that the Question Hour be suspended and the discussion on price rise and GST be taken up. As this was not accepted by speaker Om Birla, several of them trooped into the well of the house and began raising slogans. Birla, who had on Monday cautioned protesting MPs against carrying placards to the house, today reiterated his stance.

Before adjourning the House for the first time today (until 11:45 am) he was heard saying: “This is your house. You’ve been elected to represent people. You represent lakhs of citizens. The house is not for flashing placards. The world is watching. The country is watching. Please maintain dignity. Today, a GST question is listed. You can ask questions.”

Meanwhile, Parliamentary Affairs Minister Pralhad Joshi today assured MPs that a discussion would be held on rising prices once Finance Minister Nirmala Sitharaman resumes office. Stating that Sitharaman, who is down with COVID-19, will return in a day or two, he said that a discussion would take place then, and also insisted that “as compared to many countries in the world, inflation in India is contained.”