The circuit aims to take tourists along the route followed by the prime minister during a 2019 episode of survival TV show 'Man Versus Wild', shot inside Jim Corbett National Park in the state. 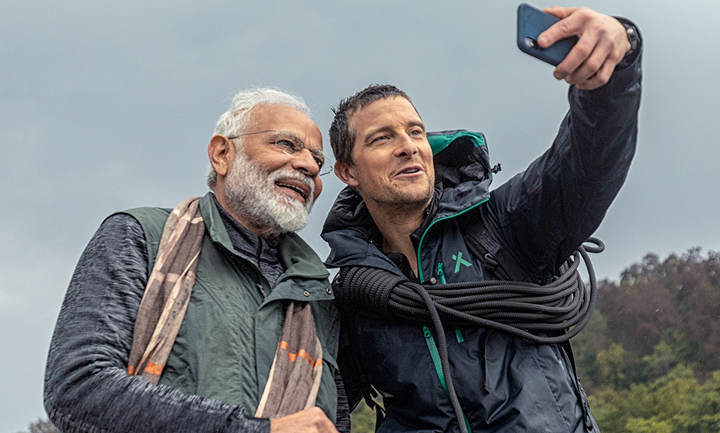 Prime Minister Narendra Modi and television presented Bear Grylls pictured in the poster for the August 12 episode of 'Man Versus Wild. Photo: Twitter/BearGrylls.

New Delhi: As part of the ongoing development of tourist circuits in the state, the Uttarakhand government is reportedly working on a ‘Modi Circuit’, showing tourists around the locations visited by the Prime Minister when he featured on an episode of survival show, ‘Man Versus Wild’.

Prime Minister Modi featured on an August 12, 2019 episode of the show, hosted by Bear Grylls, a former serviceman in the Special Air Service (SAS) of the British Army. In the episode, the presenter took Modi around the Jim Corbett National Park in Uttarakhand, giving him survival tips, discussing the country’s biodiversity and the need for environmental conservation efforts.

What better than the lush green jungles of India, in the midst of Mother Nature to throw light on environmental conservation and climate change..Do join at 9 PM tonight! https://t.co/RdndTgUtCF

According to a report by the Indian Express, senior officials of the state tourism department have started the process of identifying the route that the duo took as well as places along the same where arrangements can be made for tourists to stay.

In the course of the episode, the Prime Minister had claimed that the National Park would emerge as a global tourist destination in the future.

State tourism minister Satpal Maharaj told the Express that the idea for the Modi Circuit came to him on a visit to Croatia where he learnt about the ‘Game of Thrones’ tour, which takes visitors through a number of locations where the blockbuster HBO show was filmed.

Maharaj noted that the department has already created a number of tourism circuits in the state, such as those for Maa Bhagwati, Shiva, Vishnu, Nav-grah, Golju Maharaj, Nagdevta, Hanuman, and Vivekanand, and that the Modi Circuit is the latest in the series.

Further, Colonel Ashwini Pandir, CEO of the adventure sports division of the state tourism department, told the newspaper that Modi is the “biggest influencer in the country’ and that the development authorities want tourists to have the same experiences the Prime Minister had.

Pandir gave the example of Modi’s visit to a cave near the Kedarnath shrine in May, 2019, after which, he claims, caves such as that one are booked years in advance due to the high demand.

File image of PM Narendra Modi meditating in a cave near Kedarnath Temple on May 18, 2019. Photo: PTI

Also read: The Hoax of the Cave

Pandir told the newspaper that the route will be around 30-40 km long and that the chief concern at the moment was figuring out where tourists could stay on the route, as well as questions of popularising the initiative through social media campaigns and the like.

He also noted that write-ups would be placed at places the Prime Minister crossed to tell tourists what activities he engaged in.

Other officials told the Express that given the short length of the circuit, the idea would be to attract tourists from near-by states such as Delhi, Haryana, Punjab and Uttar Pradesh for weekend visits. The official also said that while there are other parts of the state that are beautiful, tourists need something new and this “point of attraction” is to meet that end.

Congress MLA from the state, Karan Mahara, however, noted his objections with the plan, highlighting that the day of Modi’s trip to Corbett national park, when the episode was shot, coincided with the Pulwama terror attack in which over 40 personnel of the Central Reserve Police Force (CRPF) lost their lives.

Mahara said that the party has no problem with tourism circuits, but commemorating that “black day, it is not right”.