The big-ticket project is expected to be showcased by the BJP during campaigning for the upcoming Gujarat election and the 2019 Lok Sabha poll. 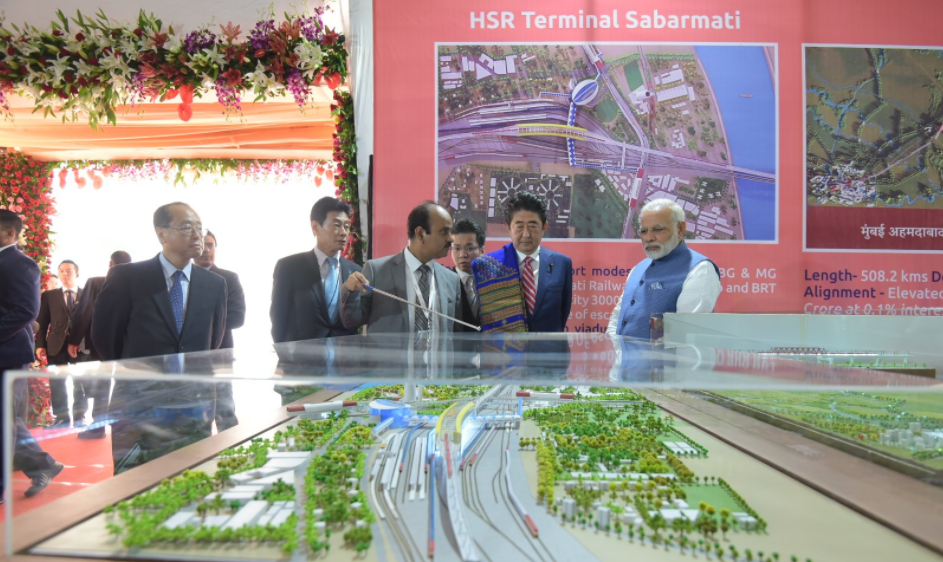 Sabarmati: Prime Minister Narendra Modi today announced that India’ first bullet train would be launched in 2022, coinciding with 75 years of independence, and dubbed it as a definite step towards ‘New India’.

Advancing the scheduled launch from March 2023, the Modi government will make the high-speed train operational between Mumbai and Ahmedabad in August 2022. The project will be funded by Japan.

Terming the introduction of bullet train in the country as “historic,” Modi, in the presence of Japanese Prime Minister Shinzo Abe, said that today a “new India has taken an important step towards fulfilling a big dream”.

He further added that “A strong India is good for Japan and a strong Japan is good for India.”

The announcement of the ambitious Rs 1.1 lakh crore project ahead of the Gujarat elections this year and in the run-up to the Lok Sabha polls in 2019 assumes significance as the big ticket project is expected to be showcased during the campaigning.

Targeting the opposition, Modi said, “Some were earlier asking where is bullet train? When we are bringing it, now they are saying ‘why bullet train?’”

Of the 508-km route the train will cover, 92% of the stretch will be elevated, 6% through a tunnel and the rest on the ground. The high-speed train will also pass through the country’s longest tunnel at 21 kms, of which seven kms will be under the sea near Thane in Maharashtra.

Modi said the bullet train project will generate employment and advance technological upgradation in the country.

Giving credit to Abe for this occasion, Modi said he is a “true friend of India and fully committed to our cause”.

The high-speed train is expected to reduce the travel time between Mumbai and Ahmedabad from the current seven hours to two hours. Faster travel will save fuel and reduce congestion on the road.

Highlighting the ‘Make in India’ programme, Modi said India had received a loan worth Rs 88,000 crore from Japan for the project with a cheaper rate of interest (0.1%) and in the future, the trains will be manufactured in India through the transfer of technology.

Modi then told Abe that “we both will travel in this train in its inaugural run”.

Besides announcing the launch of the bullet train project, work for the high-speed rail training centre at Vadodara was also announced.

Abe said when the Japanese bullet train (Shinkansen) was launched in 1964, the country was reeling from the impact of the Second World War. But soon it had an impact on the Japanese economy and became known around the world.

The Japanese prime minister further said that about 100 engineers are currently in India working on the project. “We will make it operational in time as nothing is impossible if we work together.”