After protests from the All Manipur Students Union, the government said it has withdrawn the award given to Bheishamayum Debson Singh.

The policemen who were taken to the Thoubal chief judicial magistrate in 2013. Photo: TV screenshot

New Delhi: A Manipur police official arrested with drugs worth over Rs 3 crore in a government vehicle at the Myanmar border in 2013 has been given the chief minister’s gallantry award on August 13. This comes days after state police official Thonoujam Brinda, who had led several successful anti-drug operations in the northeastern state, kicked up a storm by telling the state high court that she was pressurised by chief minister N. Biren Singh to go slow in a drug seizure case.

The chief minister’s awards were announced by state governor Najma Heptulla to mark Patriots Day, celebrated on August 13. It is meant to honour Manipuri heroes who sacrificed their lives in the Anglo-Manipur War of 1891.

The award has sparked a controversy in the state which is hugely affected by drugs – prompting the powerful All Manipur Students Union (AMSU) to demand a “high-level inquiry into the antecedents of all the police personnel” named in the awards list.

The Bharatiya Janata Party came to power in 2016 with the promise of fighting the drug menace in the border state and had made the alleged involvement of then Congress MLA Okram Henry in a drug peddling case a poll issue. In the recent Rajya Sabha elections, though, Henry was one of the two Congress MLAs to cross-vote for the BJP candidate.

Also read: Why Is the Manipur Chief Minister Angry With a State Super Cop? 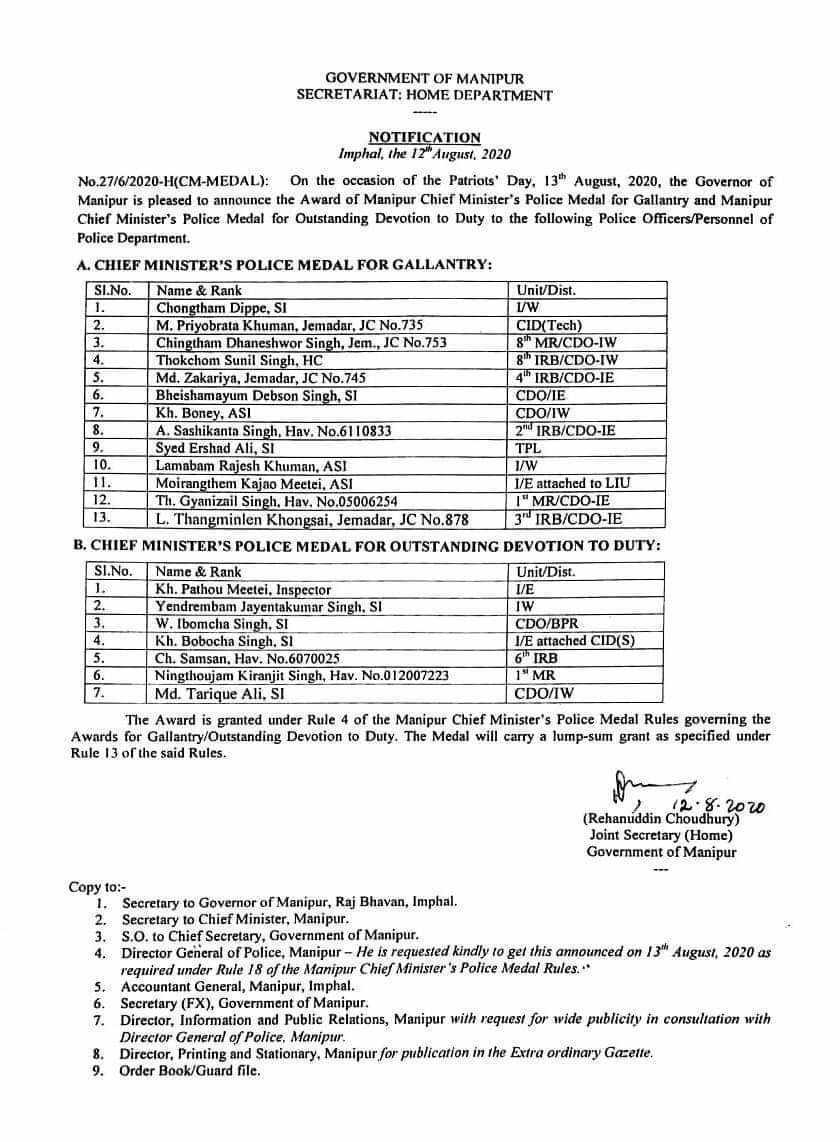 A list of Manipur policemen awarded on Patriots Day.

As per a news report on E-Pao on April 28, 2013, Debson Singh, along with another sub-inspector J.H. Premananda, had led an 11-member team of Manipur police commandoes to the border town of Moreh with drugs in two government vehicles. A team of Thoubal police commandoes caught them while trying to smuggle out a banned drug, pPseudoephedrine, to “Moreh in two Gypsies in full – uniform and service guns provided by the government”.

The news report had said that they were intercepted on National Highway 2 on the way to Moreh, adding, “One of the Gypsies had no number plate, while the other had registration number MN 1X-3392 No label of CDO, as is normally found in all Gypsies assigned to police commandoes, was found in any of the intercepted vehicles.”

A report on Kanglaonline then had said, quoting from a press release by Thoubal superintendent of police A.K. Jhalajit,

“On verification it was found that the two Maruti Gypsy both in white colour belong to the Manipur Police commandos of Moreh post and the two police gypsy (one without registration) was occupied by Jamadar Heisnam Premananda, son of H Rupmohan of Iram Siphai Mamang Leikai along with five other security personal including the driver while the other police gypsy bearing registration number MN01X-3392 was occupied by SI Beishamayum Debson Singh and six security personnel. While checking the two police vehicles, one plastic gunny bag with “ Golden Singha” inscribed on it was found containing 4680 strips (ten tablets in each strips ) of Pseudoephedrine tablets marked as `Respifed`  were found inside the police vehicle occupied by SI Debson of CDO unit Imphal East and now posted at Moreh. The check on the another police vehicle occupied by Jamadar Heisnam Premananda and his police party revealed two air bags: one olive green in color with “scope” and “indiana” marked on it and containing 5880 strips (10 Tablets in each strip) of Respifed Tablets and the other deep purple in colour with “Star Bag” marked and containing 23 plastic packets of pseudoephedrine tablets were found, out of which 10 packets contained 26400 tablets each; 12 packets containing 18000 tablets each and one packet containing 21100 tablets were found.”

It further added from the press note,

“On spot questioning of the two officers- Jamadar H Premananda and SI Debson revealed that the huge consignment of the tablets concealed in the bags were handed over to them by one Md Ali, son of Md Kasim alias Abo of Lilong Leihaokhong at Khongjom Patpal Lamkhai along national Highway number 2 at around 5 am yesterday morning for transporting and delivery of the said consignment to one of his associates of Md Ali at Moreh.”

The E-Pao report also said while one tablet of  Pseudoephedrine “cost around Rs. 6.56”, since it was banned in Manipur, its price in the black market had shot up to Rs 20 per tablet. As per the Thoubal police press note then, the drugs were worth Rs 3,64,02,000 in the international market.

The E-Pao report, interestingly, had stated that while the Thoubal police had paraded before the media then army PRO Colone Ajay Chowdhry and five others caught with drugs while coming from Moreh in February 2013, Debson Singh and others were kept away from the press after their arrest. Nor was the amount of the drugs in the market announced at once.

In the Colonel Chowdhry case, the army had then said that it would not give any legal help to him. He, however, got bail from the special court of the Narcotic Drugs and Psychotropic Substances (ND & PS) in May 2014.

Quoting a Thoubal police officer, the E-Pao report had said that while Debson Singh and another sub-inspector were arrested, the other nine commando personnel “cannot be termed as ‘arrested’ by the police since they were used by the two”.

Singh, along with the others, were produced before the chief judicial magistrate of Thoubal on August 29, 2013, and remanded to eight days police custody. They later came out unscathed and rejoined work.

The BJP-led government, to fight the drug menace, had declared a “War against drugs” after coming to power, while establishing a separate court to fast-track cases. The chief minister awarded several officials including Th. Brinda for successful operations. However, he threatened to sue her for her affidavit in the high court, which also named his wife who was named as being close to the arrested drug peddler by a close associate of the chief minister and a local BJP leader.

The state students’ union press note said, “AMSU hopes and pray that the much flaunted ‘war against drugs’ is not turned into ‘war for drugs’.”

On August 16 night, the state secretariat reacted to news report on the matter in the Imphal Times and to the AMSU press note, and stated in a press statement that it has withdrawn the award given to Debson Singh based on a preliminary enquiry. The note signed by R. Choudhury, joint secretary (home), also said a committee to be headed by Radhashyam Singh (IPS) would probe the lapse in the matter and has suspended the official particularly responsible for including his name in the awardee list.

It also said Debson Singh has also been suspended “for concealing the drug case pending against him”.