Mamata has reversed her perception as uncooperative chief minister. The ball is now in BJP's court. 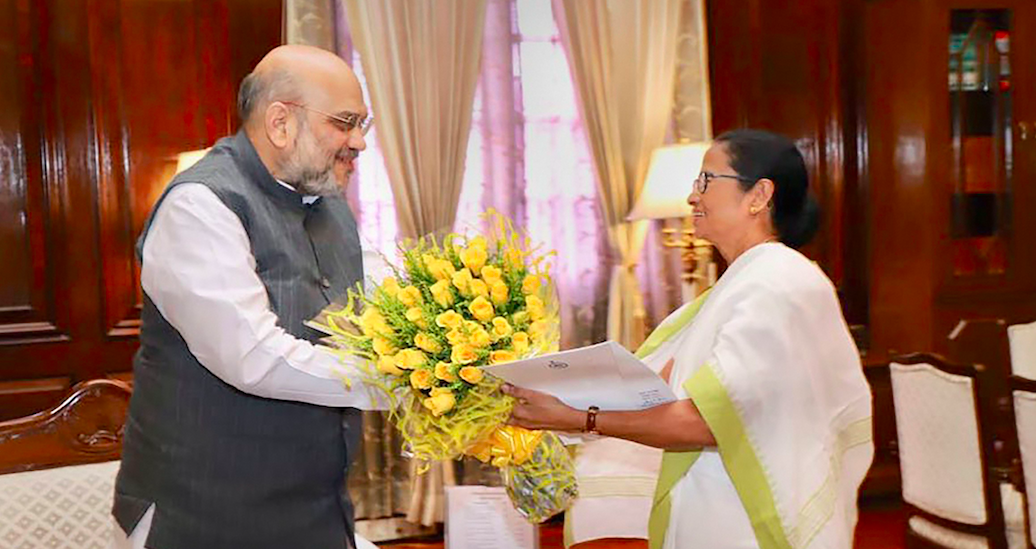 New Delhi: A day after meeting with prime minister Narendra Modi, West Bengal chief minister Mamata Banerjee met Union home minister Amit Shah on Thursday. The meetings which she termed as “government to government” interactions are in the limelight given the poor relations that have hitherto lasted between Bengal and the BJP-led Centre.

Soon after her cordial meeting with the prime minister, Mamata had said that she could meet Shah if he gives her an appointment. Responding to a question  on the much-contested plan by the Centre to implement an Assam-like National Register of Citizens (NRC) across the country and especially in Bengal, she unhesitatingly opposed any such initiative. “Neither has any proposal come, nor will it be done,” she said.

Around the same time on Wednesday, Shah was busy in Jamtara, a town at the Bengal-Jharkhand border, where he reiterated his campaign call to implement a citizens register on the lines of Assam across India.

This translates to: “You go to settle down in England, the Netherlands, America, nobody will allow you to enter. Then how can anyone just come to India and settle down here? Can anyone come and stay here? Countries do not function like this. A register of Indian citizens is the need of the hour. In our election manifesto, we had promised that not only in Assam, we would bring NRC in the entire country, make a register of Indian citizens. For others, action will be taken as per the law.”

Shah has been advocating an NRC-like process across India to drive out “illegal immigrants”, who he also termed “termites” in one of his rallies earlier.

The NRC has been a sore point between the Trinamool Congress and the BJP. As was evident in the recently-concluded general elections, BJP campaigned with the promise of an NRC in Bengal while Mamata’s TMC ardently canvassed against such a plan, which it called divisive and polarising in nature.

The meeting between Shah and Banerjee was held amidst waters made muddy by such campaigns. Soon after the hour-long interaction, Mamata said that she had raised the issue of exclusions made in the updated NRC in Assam and made her point that Bengal does not need an NRC.

WB CM Mamata Banerjee: I handed over a letter to him (HM Amit Shah), told him that of the 19 Lakh people left out of NRC, many are Hindi speaking, Bengali speaking & local Assamese. Many genuine voters have been left out. This should be looked into. I submitted an official letter pic.twitter.com/PiBPbZM02M

“We have handed over a letter where we have said that of the 19 lakh people who have been excluded from the NRC in Assam, there are many Bengali-speaking people. There are Hindi speaking ones as well, our Gurkha brothers and sisters are also there, some local Assamese too. We have said, whichever genuine voter has been left out should get an opportunity in a manner that they feel they are very much Indian. So we have discussed issues related to NRC,” the chief minister said.

She added that despite her persistence, the home minister “said nothing about NRC in Bengal”.

“So whatever I said about (the NRC in Assam) he (the home minister ) heard carefully. He said he would look into it. So many people in Assam are facing uncertainty. Where to stay? Where to go? I told him about digital ration card lines. Lakhs of people have begun queueing because it has created a scare. So I told him our country is for all languages and for all kinds of people. So we must make sure that whoever is Indian is not disturbed. The home minister heard me carefully and I believe he will play a positive role,” she said.

Mamata has been opposing the updation of NRC for over a year now. Her campaign had gained traction among a significant section of minorities who live along the Bangladesh border in Bengal. The BJP has used it as a polarising issue to target TMC with and has maintained that the party’s stand has been one of “minority-appeasement”.

However, with the final list of NRC having been released, the BJP itself has been on the backfoot. A large section of Bengali-speaking Hindus, Gurkhas and Indian immigrants – most of these communities are considered to be the saffron party’s supporters – may be declared illegal immigrants soon. This has caused great uncertainty regarding NRC among many sections of the population.

Mamata’s initiative to meet the prime minister and the home minister, therefore, also appears to be tactical. She has now put the ball in the Centre’s court. Until now, the BJP leaders had complained about her uncooperative attitude. They have attacked her for not implementing the Centre’s health insurance scheme – Bengal already has a functioning health insurance scheme – and the prime minister has himself attacked her for allegedly misusing Central funds.

The usually confrontational Mamata, with her friendly gestures towards BJP leaders, will now have room to accuse the Centre of neglecting Bengal’s interests for political gains if her demands are not met.

The shift in her position towards the Centre is noteworthy as she has been boycotting all meetings between chief ministers and the Union cabinet. She had also refused to follow the Centre’s diktat when Cyclone Fani hit the Odisha and Bengal coast a few months ago.

Mamata refused to comment on the CBI case against Bengal IPS officer Rajeev Kumar in the Saradha chit fund scam. The case assumed political proportions, with both the state government claiming that the Centre was misusing the CBI for political vendetta.

Also read: The Decline in the Indian Bureaucracy and Police is Manifest

Political observers say that her meetings with the prime minister and the home minister, therefore, have a political undercurrent which will reflect in Bengal politics in the days to come.

The Bengal BJP unit has been commenting on her visit to New Delhi. Mukul Roy, BJP top leader in the state, said that if the prime minister agreed to meet Banerjee, she should also respond to his calls in future.

Dasgupta, well-aware of the good optics the invitation would garner for her, said that the coal-block should not be opened until its environmental clearances and rehabilitation packages are settled.

My letter to the PM suggesting that the inauguration of the Birbhum coal block should await proper environmental clearance and rehabilitation package. Any inauguration by PM at this juncture will lead to serious distortion’s and open the way for unscrupulous operators. pic.twitter.com/SkbwxOnXe7

The BJP’s national general secretary-incharge of Bengal, Kailash Vijayvargiya has already termed her meeting with the Central leaders as Mamata’s “desperate attempt to save Rajeev Kumar”. He claimed that his arrest would indict many TMC leaders in the state cabinet in the Saradha chit fund scam.

What political impact Mamata’s new efforts to engage with the Centre have on Bengal’s electoral ground remains to be seen.

However, she has definitely succeeded in reversing her perception as an uncooperative state head. It is now BJP’s turn to prove its political mettle in Bengal.