Mamata Banerjee who is also West Bengal's health minister has said that the doctor's strikes were engineered by the BJP and Congress. Source: Twitter/@ANI

New Delhi: Three days after West Bengal doctors began their agitation in protest against the alleged assault on a junior doctor at a Kolkata hospital by members of a deceased patient’s aggrieved family, state chief minister Mamata Banerjee told them to return to work on Thursday or risk facing penalties.

The protesting doctors have refused to call off their strike despite the four-hour ultimatum given by the TMC supremo.

Doctors of 13 medical colleges and hospitals as well as six district hospitals have been on strike since Monday, when relatives of a 77-year-old patient, who died at the NRS Medical College and Hospital on Monday, reportedly attacked the doctors. Two interns were seriously injured. One is in the intensive care unit while the other has sustained a fractured skull and is in a coma after being hit with a brick.

On Thursday, Mamata, who has the state’s health portfolio with her, said the strikes were a ‘political conspiracy‘ engineered by opposition parties – Bharatiya Janata Party (BJP) and Communist Party of India (Marxist).

#Bengal govt appeals to junior doctors to end their strike. A junior doc at NRS #Kolkata was hit with a brick by a patient’s family when the patient died. Doc went into a coma. Today, a woman doc in Burdwan, where docs are also striking, was struck in the eye. May lose vision >> pic.twitter.com/vvN72ftmS2

The health department had issued a statement on Wednesday as well, telling doctors to “immediately withdraw the agitation and restore normalcy in the essential service to the citizens at the earliest”.

The incident has already seen much bickering and opportunism by opposition parties. While Mamata is visibly pressurising the doctors to stop their agitation, they have criticised her for not visiting the injured doctors yet and have called for her to resign.

Congress MP Adhir Chowdhury has written to Prime Minister Narendra Modi, asking for his intervention.Mukul Roy, a former Trinamool Congress leader and now one of the BJP’s most prominent faces in Bengal, has said that the TMC itself is behind the attack on doctors. 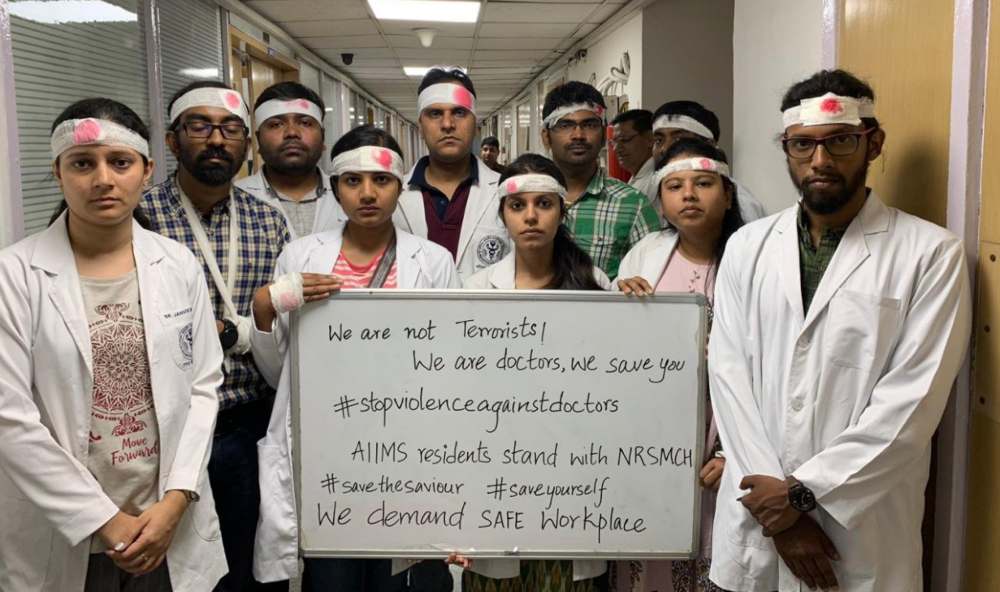 Members of the Resident Doctors’ Association of AIIMS in New Delhi wear bandages as a mark of protest on Thursday. Photo: Twitter/@ANI

Across India, doctors have been attacked time and again by the angry families of patients for years. The high cost of medical care, especially at private hospitals, is a common trigger for such bursts of violence and anger, which often occur after a patient dies while in treatment. Doctors are then accused of having been negligent or careless.

On the other hand, doctors work under stressful conditions for long hours and with insufficient pay. Major protests by doctors against violence by patients’ families took place in 2017, starting in Maharashtra and spreading across the country, when again, doctors had been assaulted by patients’ families.

In this current protests in Bengal, emergency wards, outdoor facilities and pathological units of most of state-run medical college hospitals have reportedly been closed, severely affecting healthcare.

Meanwhile, the Indian Medical Association has called for a nationwide protest on Friday. Doctors in Delhi’s AIIMS wore helmets and black bands to work in solidarity with their Bengal counterparts.

The medical community has recently also seen protests against casteism, triggered by the suicide of Payal Tadvi, a young oppressed caste Muslim gynaecologist in Maharashtra, who had complained of caste-based harassment by three women doctors.