The posters were released after an "elaborate exercise involving technical experts and photojournalists", according to news agency PTI. New Delhi: The Jharkhand police on Tuesday released posters of those allegedly involved in the June 10 protests in Ranchi against ‘insulting’ remarks on Prophet Mohammad, a day after governor Ramesh Bais told the state’s top cop and other senior officials to make details of the protestors public.

Efforts are underway to identify around 30 people whose photographs have been released, he said.

Police officials’ numbers and rewards for providing information about the whereabouts of the violent protesters were mentioned in the posters.

On Monday, governor Bais asked the state police to make public the names and addresses of protesters who had agitated against BJP leaders’ remarks against Islam.  Protests in Jharkhand took place on June 10, alongside several cities across India. In Ranchi, police firing allegedly killed two protesters. More than 25 people were allegedly injured.

Bais also asked the director general police (DGP) Neeraj Sinha and other senior officials he had summoned at Raj Bhavan to display their photographs on hoardings at main places so that the people can identify them, according to Indian Express.

The Uttar Pradesh police had put up posters with photos and other details of the accused who participated in protests in Kanpur. 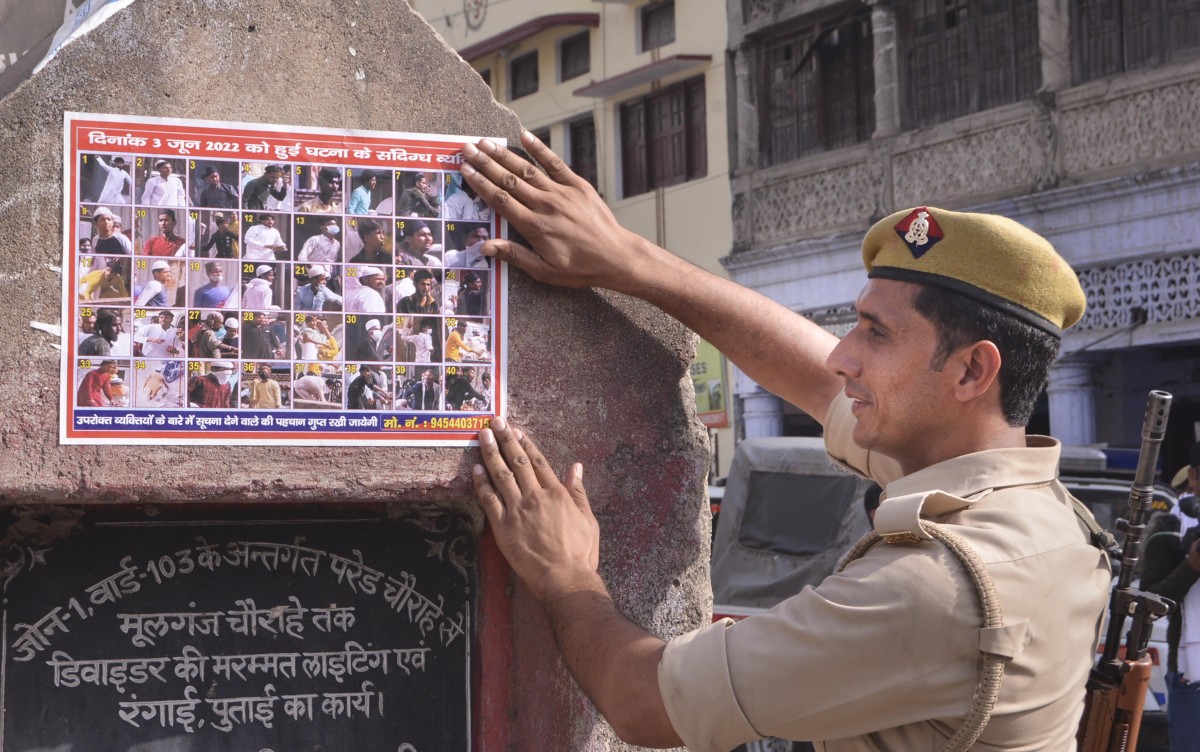 A policeman sticks a poster of those accused of communal violence in Kanpur, Monday, June 6, 2022. Photo: PTI

“How many arrests have been made so far? How many FIRs have been registered? Find out details of all protestors and those who have been caught, make their names/addresses public, make their hoardings by displaying their photographs at main places in the city so that public could also identify them and help police,” the governor told the officials.

He also demanded to know whether the police have identified people spreading rumours on social media and whether any action has been taken to punish them.

“All such people need to be identified and punished,” Bais said.

The director general of police informed Bais that as per an Intelligence Bureau (IB) report, a turnout of only 150 people was expected, but thousands turned up. Ranchi senior superintendent of police Surendra Kumar Jha and deputy commissioner Chhavi Ranjan were among the officials asked to meet the governor.

“Why didn’t you use water cannon, rubber bullets and tear gas. There was no provision for these things there. Why?” governor Bais asked the senior police and administrative officials, an official statement from Raj Bhavan said.

“What information did the administration have about the proposed event, picketing, demonstration, procession and what arrangements you had made. You have IB, CID and what inputs did the special branch give? How many security personnel and magistrates were present there during the operation of the procession? Why didn’t you take any preventive action?” it added.

The governor asked why police officers and personnel were not even wearing helmets and protective gear.

Security has been tightened in sensitive areas of Ranchi and 25 FIRs have been registered against “thousands” of people, police had said.