Madhya Pradesh has been reeling from the spread of the coronavirus. 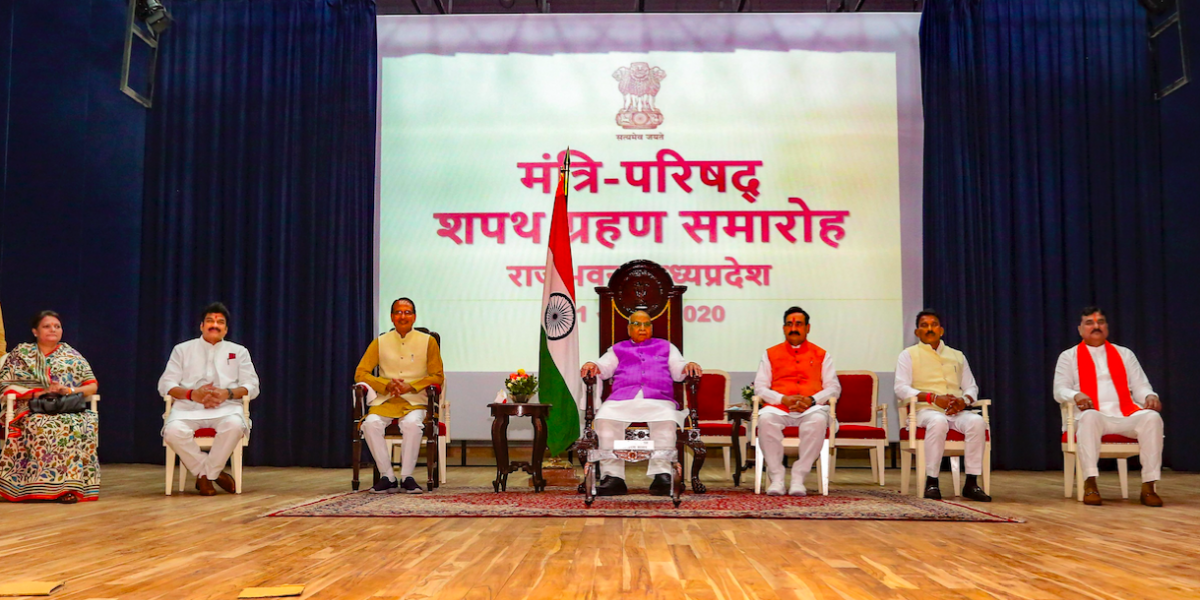 Bhopal: After sitting on it for almost exactly month, Shivraj Singh Chouhan has finally formed a five-member cabinet, which took oath at the Raj Bhawan on the afternoon of April 21.

The other three are Narottam Mishra, Meena Singh and Kamal Patel.

Chouhan had been under pressure from Congress MP Vivek Tankha who has twice approached the President of India — the second time on Monday, along with former Union minister Kapil Sibal — regarding the unconstitutionality of Chouhan operating without a cabinet.

Silawat and Rajput were ministers in the Kamal Nath cabinet as well. Silawat’s role, especially has been under the scanner, as he was the health minister. The state has been battling an escalating coronavirus situation.

While the disease threat was rising, Silawat had, in fact, led the Scindia pack to Bengaluru. He, with Rajput, will have to win on a BJP ticket within six months, to retain their places.

This is the second time within a month that an oath ceremony has been organised at Raj Bhavan amidst the coronavirus threat. Madhya Pradesh has the third highest number of cases in the country.

The delay in formation of the cabinet was apparently because there were too many claimants for the posts. Sources close to the powers that be have it that BJP’s “deal” with Scindia includes the retention of six of Nath’s cabinet ministers. Two from the 22 that defected will also have to be given posts.

That leaves only 28 spots in a possible 36-member cabinet that Chouhan can form. Narottam has been pressing to be made deputy chief minister as this is his fifth straight term as MLA. While Silawat, who is a Scheduled Caste leader, also reportedly wants the same post.

The 22 who have defected and resigned will have to win their seats again. Politicians who had been cabinet ministers during Chouhan’s previous term are also likely to claim their posts.

Some of these leaders, including former RS member Prabhat Jha, had also opposed Scindia’s entry.

Tankha, on his part, now says that this is exactly what he wanted the President to direct Governor Tandon to do. “There is still the matter of the two ordinances that he has promulgated. It is not so simple and we will take up the matter further,” he told The Wire.