The family also accused the police of not taking prompt action and arresting four persons only after the thrashing was reported by the media. 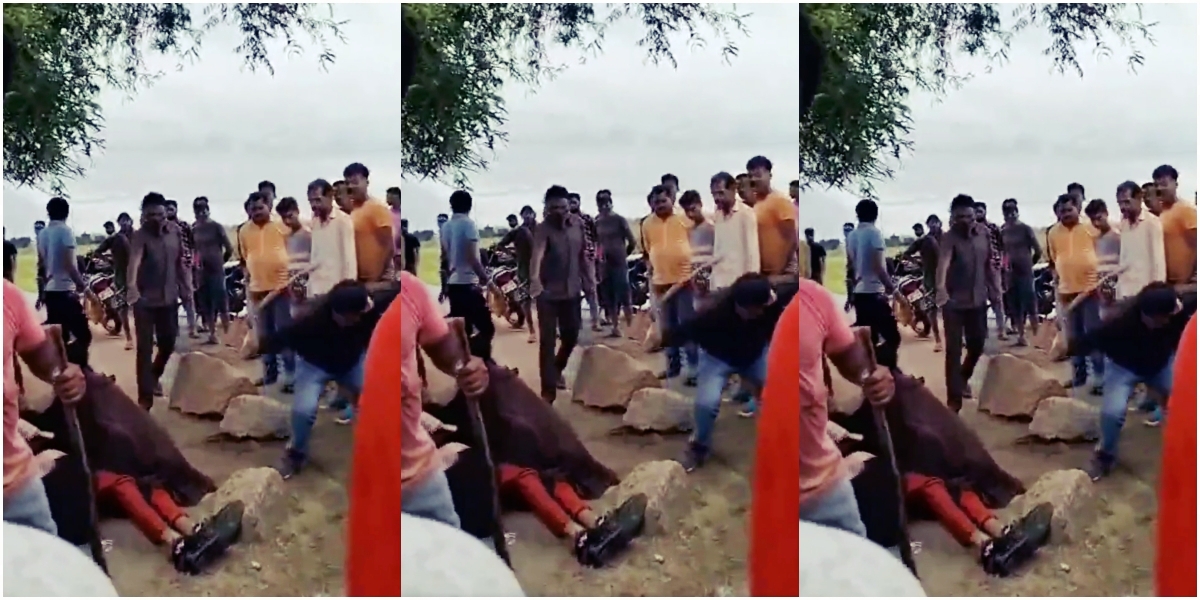 Screengrab from a viral video showing Wajid Ali being assaulted in Chhindwara district of Madhya Pradesh on September 15, 2022. Photo: Screengrab via Twitter

Bhopal: Nearly a month after a 23-year-old Muslim man eloped with a Hindu woman in Madhya Pradesh’s Chhindwara district, the man and his parents were attacked by a mob on September 15 – allegedly as an act of “revenge”.

According to Wajid Al, a resident of Lalgaon – which is nearly 35 km from the district headquarters – he, his mother Sameena Ali (48) and father Sayed Layak (52) were on their way to meet a relative who was newly wed when a large mob intercepted them near Auriya village, which falls under the limits of the Chouria police station.

Chanting religious slogans, the mob tied Ali to a bike and dragged him from one village to another in full public view. Sameena’s clothes were torn and Layak was thrashed and his beard was pulled, they said in a police complaint.

In videos of the incident which have gone viral on social media, the mob can be seen thrashing Ali and his father with sticks while a group of women are assaulting his mother. At one point, Wajid can be seen lying motionless near a tree while his mother begs the mob to spare their lives.

The Wire has seen the videos but is not posting them.

“We would have been lynched by the mob if the police did not rescue us on time. They assaulted us for three-four hours but no one came to our rescue,” said Sameena over the phone. “The attackers were unknown to us and we had no clue why they were assaulting us then. They were using religious slurs, so it seems that we were attacked because of our faith,” she added.

Assault continued for an hour until Police saved them, said Ali.

In a video clip, Ali alleged that they were trashed owing to their faith.

“Our Police statements were deliberately changed by cops as accused & TI belong to the same caste.”

“They looted all my ornaments and gold and Rs 10,000 in cash. When I tried to dial 100 to get police help, they snatched the three mobile phones which were in our procession,” Sameena said.

The police rushed them to the hospital, where all three were admitted. Hours later, a first information report (FIR) was lodged at the Chourai police station against ‘unknown persons’ under various sections of the Indian Penal Code including uttering obscene words, voluntarily causing hurt and criminal hurt.

Ali said that though the faces of many people can be seen in the videos that are circulating on social media, the police lodged an FIR against “unknown persons”.

Almost 40 hours after the incident, when police still did not act, the victims approached Chhindwara SP Vivek Agrawal. In a two-page complaint, they sought prompt action and protection for the family.

According to Shashi Vishwakarma, town inspector of Chourai police station, Ali eloped with a Hindu woman from the same village about a month ago. Taking action on a missing complaint filed by the woman’s family, they were traced in Hyderabad. The woman was handed over to the family and they refused to file an FIR against Ali.

“Soon after the incident, the woman’s family sent her to her uncle’s home in Auriya. The boy might have gone to the village to meet the woman when locals and family spotted them and it led to a scuffle,” said Vishwakarma to reporters in a video clip.

“Four people have been arrested in connection with the incident and sent to jail,” said the police officer in the video clip.

The arrested persons are Santosh Pal (40), Mahesh Pal (32), Nekram Pal (35) and Sushma Pal (30). They are relatives of the woman with whom Ali eloped. The town inspector said, “We are examining the facts and evidence and if required, we will add more sections to the existing FIR.”

Responding to the police officer’s claim, Ali said, “First of all, we were in Nasik, not Hyderabad. Before we could marry, the police detained us. They kept the woman in 24 hours of police custody, forcing her to give a statement against me. But she did not budge. With the police’s support, she was handed over to the family against her will.”

He said the family did not file an FIR despite alleged pressure from right-wing groups because they feared that she may give a statement against them in the court “and they may lose her”.

Refuting the police’s claim that he went to Auriya to meet with the woman, Ali claimed, “The police are supporting the woman’s family since the matter came to light as the woman and the town inspector belong to the same caste. Besides, they have also changed our statement in the FIR from the actual one which was taken soon after the incident.”

“They attacked us to take revenge,” claimed Ali. “I haven’t gone to meet her [the woman] but we are passing through the village. And why would I go to meet her with my father and mother, despite knowing the risks? This is nonsense,” he told The Wire over the phone, speaking from the hospital. “Police only swung into action after the media reported on the incident.”