The armed forces tribunal's verdict to free the accused has created a fear for safety and a demand for justice among the victims' families and villages. 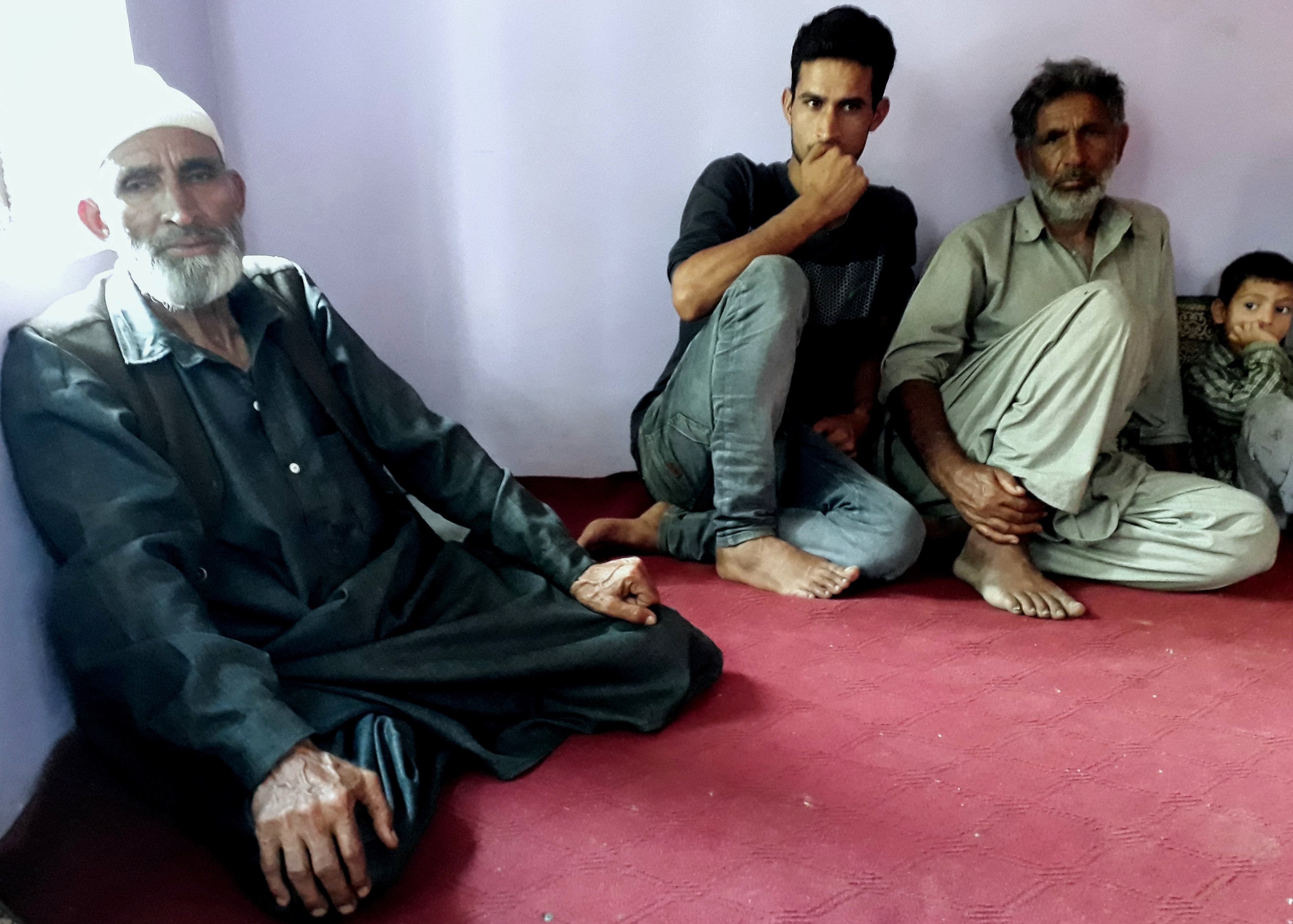 From left: Father of Riyaz Ahmad, his son Aijaz and father of Shehzad discussing the army tribunal’s verdict. Credit: The Wire

Srinagar: “It feels like our sons have been murdered again today. We don’t accept this military verdict. Everybody knows how our sons were killed for money. How could they let the killers walk free…this isn’t justice,” uttered Naseema Akhter, mother of Riyaz Ahmad Lone, one of the three civilians who were killed in a staged encounter by the army in Machil border area of north Kashmir in 2010 and branded as foreign militants for medals and cash reward.

On Friday, July 28, the family members of the victims – Riyaz, Shezad Ahmad Khan and Mohammad Shafi – met at Lone’s house in Bonpora Naidhal, Baramulla, to decide on their fight against the armed forces tribunal’s verdict that suspended the life sentence of the five accused army personnel of 4 Rajputana Rifles who were convicted by a General Court Martial in 2014 for staging the killings.

The suspension of punishment means that the accused, Colonel Dinesh Pathania, Captain Upendra Singh, Havildar Devinder and Lance Naiks Arun Kumar and Lakhmi, will soon walk out of jail. The sixth convict, Abbas Hussain Shah of territorial army, is already on bail.

“We won’t let this happen. We will fight even if it means selling all our property. We will start with protests at the district office (Baramulla) and in Srinagar. If nobody listens to us, then we will be left with no option but to self immolate along with our families”, said Ghulam Muhammad Khan, father of Shehzad.

Murders on the border

The case dates back to April 29, 2010, when the trio was promised jobs as porters with high wages by an army source Bashir Ahmad Lone. He had connived with another army source Abdul Hamid and Abbas to sell the trio for Rs 50,000 each to the army and taken them to Kalaroos village in Machil near the Line of Control (LoC).

On reaching near the LoC, the trio was instead handed over to soldiers of 4 Rajputana Rifles who killed them in the fake encounter and dubbed them as Pakistani militants.

The next day, the army claimed it had foiled an infiltration bid on the LoC near Kupwara by killing three militants. It also claimed it had recovered five AK rifles, a large cache of ammunition and Pakistani currency from their possession.

However, back home, the sudden disappearance of the youth, who lived in three different mohallas of Nadihal, led the families to file missing reports with the police after days of unsuccessful search.

It was the police investigation which finally took the lid of the fake encounter. In their statement to the police, the family members of Riyaz had stated that Bashir took their son along with promises of arranging good jobs for them on the border.

Their poor family background and the desire to earn Rs 2000 a day, as promised by Bashir, lured the trio to the trap. While Riyaz was working as a small time mechanic in Sopore, Shahzad was a fruit vendor and Shafi worked as labourer.

During an interrogation by the police, Bashir had confessed that on April 26, 2010, he had a meeting with three youths and had asked them to come the next day.

“I remember vividly that my son left home the next day (April 27) to meet Bashir, but returned soon saying he was told by Bashir to come in couple of days”, said Naseema.

On April 29, as per the police investigation, Bashir and Hamid took the trio to Kalaroos and handed them over to the army. During investigations, police ascertained their call records which confirmed they were in Thayen village of Kalaroos in Kupwara when the trio was killed in Machil.

The police had also recorded statements of the driver of the vehicle in which the three youths were taken from their native village of Nadihal to Kupwara before being gunned down at the LoC.

“They had been buried in Machil. But when we brought the bodies here for burial in local graveyard, we saw that their faces were painted with black colour to show they are militants”, said Aijaz. 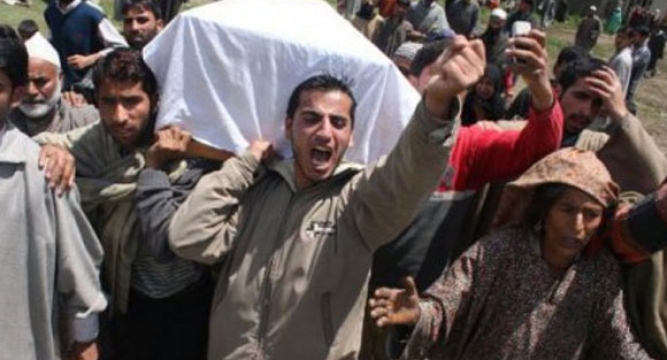 Coffin of the Machil fake encounter victim being carried by locals. Credit: ANI

From court martial to suspension of sentence

The police investigation finally led to a charge-sheet of the 11 accused – nine army personnel including a colonel, two majors and two civilians. They were charged under Sections 302 (murder), 364 (abduction), 120-B (criminal conspiracy) and 34 (common intent) of the Ranbir Penal Code. The case was being heard by Sopore chief judicial magistrate which issued a notice to the army to produce the accused before the police, based on the charge sheet.

The army, however, refused to follow the court’s direction and the case finally landed in the high court which struck down the lower court ruling, allowing the army to order a court of inquiry. The findings of the inquiry led to the court martial of the accused in December 2013. The accused were finally sentenced to life in 2014 by Summary General Court Martial (SGCM). The award was confirmed by the army on September 7, 2015. Abbas was however acquitted by the court while Bashir and Hamid are in jail facing trial.

The then chief minister Omar Abdullah had termed the verdict as a “watershed moment”. “The army has handed out life sentences to seven in the Machil fake encounter case of 2010. This is indeed a very welcome step… This is a watershed moment. No one in Kashmir ever believed that justice would be done in such cases”, Omar had said in a series of tweets.

For the first time in the 25 years of militancy in Jammu and Kashmir, the army had confirmed life imprisonment to its men by a general court martial for their involvement in killing civilians in a fake encounter.

“Omar Abdullah government had pressured the Congress government at the Centre, and that is why this (life term) happened,” retired Major Anand Kumar, counsel for the accused told the Indian Express after the verdict. “We are confident the entire case will be thrown out… the tribunal had not done justice, and that the case had been built on circumstantial evidence.”

‘Institutions continue to let down Kashmiris’

The Machil fake encounter was among the biggest cases of human rights violations that Kashmir has seen during the past 30 years of militancy, apart from the massacres in the early 1990s and other fake encounter cases including the one of Pathribal in which five civilians were killed and dubbed as foreign militants.

The killing had triggered an outrage across Kashmir. It turned into an uprising in which over 120 people, mostly youths, were killed and hundreds were injured.

“This (Army Tribunal’s verdict) hasn’t surprised us. The concern for the political leadership as well as the military leadership is to boost the morale of the army in Kashmir because they say the forces are working in a hostile environment. That is why we also saw the army awarding Major Leetul Gogoi,” said noted human rights lawyer Parvez Imroz.

He said there has been a “pattern” in all the high profile cases of human rights violations like Pathribal fake encounter, Kunan Poshpora rape, civilian killings of 2010 and 2016. “They want to give a message that the forces enjoy complete impunity in Kashmir and that is why their institutions have again failed victims of human rights violations.”

Rights watchdog Amnesty International India has also expressed dismay over the tribunal verdict, saying the “developments” in the fake encounter case once again highlight the need for allegations of human rights violations to be investigated and prosecuted by independent civilian authorities, instead of the “secretive military justice system”.

The families of the three victims have approached the district commissioner of Baramulla, asking the government to own the responsibility for the safety of their lives.

“The decision to set free the accused has led to fear not only among us (the three families) but the entire village. We fear for our lives. Those who killed our sons for awards can go to any extent to harm us for exposing them,” said Riyaz’s father Mohammad Yusuf Lone who had written an application on behalf of the families to the district commissioner reasoning their apprehensions and seeking safety assurances from the government.

“Please go through the contents of the application. The applicants have certain apprehensions which need to be addressed to their satisfaction,” the commissioner has written to the senior superintendent of police, Baramulla.

“We went to the special public prosecutor (SPP), Baramulla, but he asked us to take up the issue with SSP Sopore who wasn’t present at his office today,” said Lone.

Shahzad’s mother, Asha Begum said it would be murder of justice if the soldiers are released. “Those locals who lured our sons and got them killed have the power and the money. We aren’t safe now,” she said.