Prime Minister Narendra Modi had told the press before both houses assembled, "The government is ready to debate any issue and answer any question." 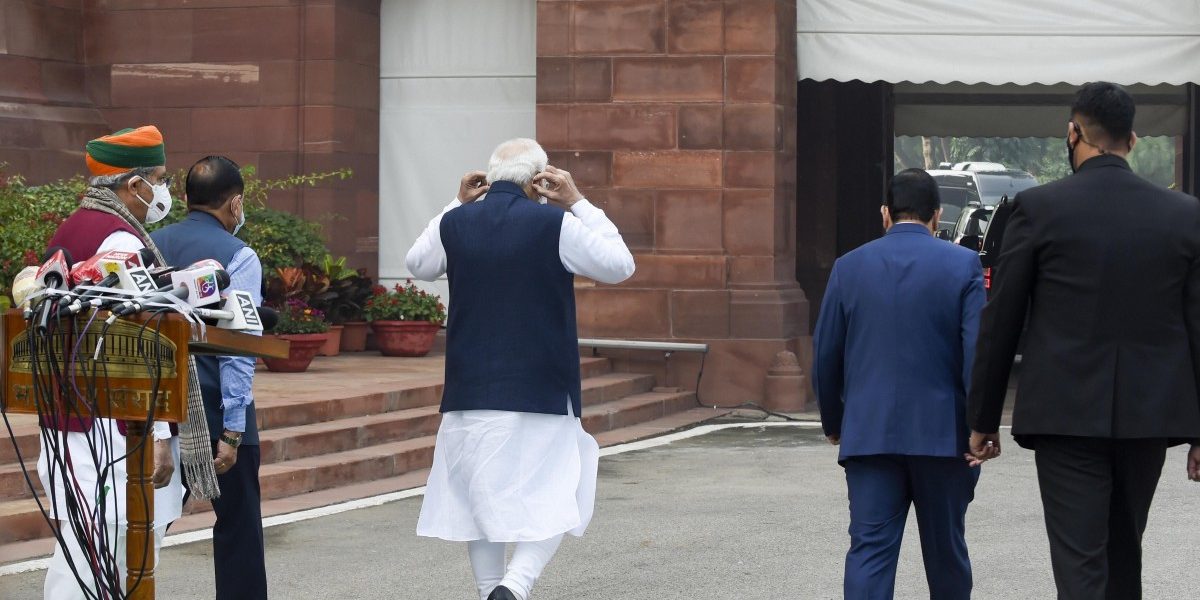 New Delhi: The Lok Sabha and the Rajya Sabha passed the bill to repeal the three farm laws on Monday, November 29, in the same manner in which the laws were brought – without discussion.

Winter Session of parliament got off to a stormy start with opposition parties demanding a discussion on the Farm Laws Repeal Bill, 2021, in both the houses and the Union government not relenting to it.

As soon as the Lok Sabha assembled at 11 am, Union agriculture minister Narendra Singh Tomar tabled the bill to repeal the three contentious farm laws, a development which Prime Minister Narendra Modi had announced on November 19 in a televised statement.

Opposition members in the lower house trooped into the well and demanded a discussion on the three farm laws and the need for the government to repeal them at this particular point in time.

Amid slogans, the house was adjourned till noon.

As the opposition continued the protests after the house reassembled, the Speaker announced the passage of the bill after voice vote, within minutes of it having been presented again by Tomar. He then adjourned the House till 2 pm.

Later when the house reconvened. Rajendra Agrawal, who was chairing the proceedings, requested members to “allow the house to function” but later adjourned it till Tuesday morning.

Congress and other opposition leaders criticised the swift passage of the Bill, recalling as similarly “undemocratic” the passage of the farm laws over a year ago.

A debate would make the PM & BJP answerable for…
• Conspiracy to sell the farming sector at the altar of Crony Friends;
• Sacrifice of 700 farmers;
• Not giving MSP.

Modi Sarkar wants to push through the 3 farm laws repeal Bill today in Parliament WITHOUT any debate. The passage of the laws 16 months ago was most undemocratic. The manner of repeal is even more so. The Opposition demands a discussion before repeal.

At the very least the government owes the public an explanation for their haste in bulldozing these laws through. To pass laws& repeal them within a year prices lack of consultation& consideration, and ends up wasting taxpayers’ money& Parliament’s time. Govt must be accountable. https://t.co/KkDfH9KZT0

Before the start of the session, Prime Minister Narendra Modi – who on Sunday skipped the all-party meet on the Winter Session – told the media, “The government is ready to debate any issue and answer any question. We should debate in parliament and maintain the decorum of the proceedings.”

You ran away from discussing #Pegasus & are responsible for disrupting full Monsoon Session. In Sept 2020 your Govt broke every rule & bulldozed #FarmLaws

The problem is no one in your Cabinet will tell you that #Parliament is not #MannKiBaat https://t.co/p0qdbVNbJq

The opposition has also demanded legal assurance of Minimum Support Price, which has been protesting farmers’ demand for over a year, and compensation for the families of farmers who died during the last year of protest.

Before the house gathered, Congress leaders led by Sonia Gandhi and Rahul Gandhi held a protest against the government’s handling of farmers’ issues at Mahatma Gandhi’s statue in the parliament complex.

Congress President Smt. Sonia Gandhi leads our protest against the draconian farm laws imposed by the Modi govt, in the presence of Shri @RahulGandhi and other MPs.

The Congress party will not rest until the interests of our farmers are upheld. pic.twitter.com/RKBNLgFu66

However, the meeting could not arrive at any consensus on the issue as the Union government reportedly held the view that when the announcement on repealing the laws had taken place already, there was no need for discussion.

As such, the upper house too witnessed strong protests by opposition members on the issue when it assembled. The house was later adjourned, first till noon and then till 2 pm.