In Advani's Silence, the Sum of All Fears

Lal Krishna Advani’s isolation mirrors the retreat of Indian politics. But then that is what the autumn of the patriarch is like in the Hindu varnashrama dharma – he spends a lifetime building a house only to find that when the edifice is ready, he is out of it. Not for him the courtyard, he stays put on the threshold.

Day after day, and days stretch to years, he remains there in the hope that someone from inside will call out to him – if not the son, then the daughter-in-law; if not the grand-daughter, then the grandson. When that doesn’t happen, he himself starts crying out in a hoarse voice. On occasion he even steps inside, but finding the house empty, returns to his threshold spot. Every now and then he threatens to renounce the world and go to Haridwar, but doesn’t budge an inch from the threshold.

In the last three years whenever Advani ji has been seen in public, he has had the demeanour of a man consumed with guilt, who wants to speak out but won’t on account of some unknown fear. Before the television cameras he has been plain evasive. Watch all the videos of the last three years and you will know what I mean. He seems to have lost his voice. It is as though he has been locked up by someone in a glass tank, with the steadily rising water drowning out his screams for help. The camera glides past him for he is absent even when he is present.

Advani is like that jaded shirt that has been permanently hung out to dry, weathering the barbs of rain, the shriveling heat of the sun and collecting dirt. One day it falls to the ground patchy with dust and slush. The shirt knows that the one who washes has other shirts too – new ones at that.

I wonder, does Advani cry when he is alone? Does his body heave with sobs? Does he scream, call out for somebody when the walls of the room seem to be closing in on him? Does he pace around in his room every now and then or, hearing the footfalls of fear, does he quietly go back to his chair? Does anyone call out to dada apart from his daughter? Does any chief minister, central minister or ordinary politician pay him a visit? 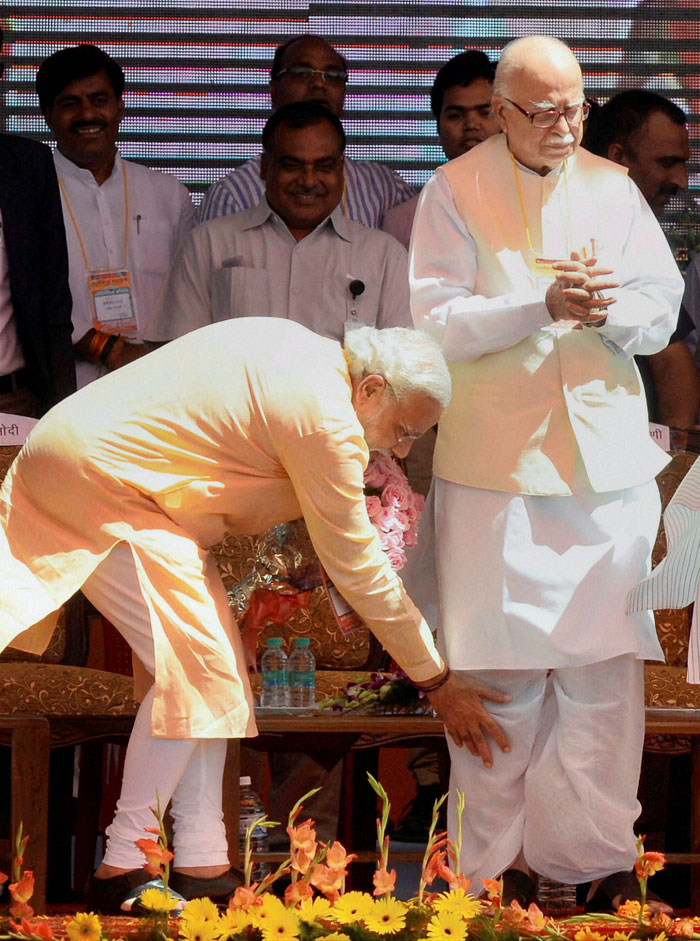 These days every minister is quick to tweet photographs of his/her stately progress from the bath to the food-bite; he/she even tweets pictures of birthday bashes of politicians from other parties. These ministers have the whole world on their timeline, but not Advani. It’s an open secret. The message is clear – meet Advani at your own peril; to meet Advani now is to become him.

When he wakes up to the loneliness of isolation every morning, what is the image that swims before his eyes – the present or the past? Does he immerse himself in newspapers all day or stare unseeingly at news channels? Does he wait for the telephone to ring?

But who would want to meet Advani – he doesn’t chant Modi’s name and, more importantly, there is nobody chanting his name. More to the point, why does he not chant Modi’s name if that is what it takes to remain relevant? If his stance signals a personal protest or rebellion, then why doesn’t he place it on record?

Prior to the 2014 general elections Advani had created a blog. Even now he can put it to good use. There’s so much happening in the world, he can safely write about that. Like so many others he can take to the lecture circuit. He would have much to say on the subjects of leadership and organisation. If nothing else, his government residence must be studded with flowers, plants and trees – he must have surely forged a bond with them by now to write about them. He can definitely write film reviews. Had he done that, he would have been an Advani other than the Advani he is. The question is – why is he not?

There was a time when Advani had had a hall constructed in his residence for holding press conferences. How confident and assured he must have been about his relevance in the scheme of things then. Does he feel tempted to step into the hall at least once a day, reliving the animated buzz of cameras and questions? I am told some sounds burrow into walls and echo through the ages. Is that hall there still?

Advani is ensconced in his isolation like a man without a past. The new narrative that the BJP seems to be exploring is one in which Advani is conspicuous by his absence not only in its present but also in its past. It’s as though he was never there. He doesn’t look to be in Delhi as much as in the Andaman, where the sea waves relentlessly crash against the walls of the Cellular Jail and there is no land in sight for miles. Is it possible that he is keeping a diary – a diary of Delhi’s Andaman?

Think about it – the Congress may have suffered the loss of power, but it is Advani whose name and existence has suffered a total erasure. Sonia Gandhi continues to have a presence in Indian politics. Witness the fact that as soon as the NDA presidential nominee’s name is decided, the prime minister calls up the president of the party he wants to deliver India from. I wonder if he telephoned Advani ji as well. While India is still not Congress-free, today’s BJP has succeeded in becoming Advani-free. The party is willing to accommodate politicians from the Congress, Samajwadi Party and Bahujan Samaj Party, but not its founder, Lal Krishna Advani.

Has anybody come across any tweet from the prime minister about having had a conversation with Advani about the NDA presidential nominee? Will Ram Nath Kovind pay a visit to the Margdarshak Mandal (Council of Elders supposed to show the way to the party) – a council which has neither any elder nor a way?

The BJP’s founder is leading a life of displacement. He is not to be found anywhere in his party’s narrative of culture or nationalism. I have no liking for those who sympathise with Advani but I don’t care for those who make fun of him either. Advani embodies our collective fate. We are all fated to become Advani in our lives one day – displaced from power, institutions and society. What I want to  do is study his silence in a context where those claiming to be sanyasis, or renouncers, are becoming relevant in Indian politics, but Advani, who is staying clear of renunciation, is becoming irrelevant. Advani is unfolding like an event right before our eyes; to read it as a mishap or tragedy is to miss the point.

Those who had suggested that the opposition should nominate Advani as their presidential nominee are insulting his disciplined existence. Besides, they seem to be blithely unaware of the fact that the opposition is in the same boat as Advani. By making this suggestion, Advani sympathisers are being as insensitive towards him as his own people.

Advani is guilty on one count: he has flouted the fundamental condition of being alive, which is to speak. If he is not speaking up even though he continues to be in politics, then he is betraying politics even as politics is betraying him. What he should be doing is screaming his lungs out or sobbing so hard that his voice bursts forth from its confinement.

Advani’s silence is the most dramatic screenplay of our times – it’s a screenplay in search of a climax. Picture the scene: in the thick Delhi fog, an old man with a ramrod straight bearing is walking down Rajpath. In a while the tapping sound of a walking stick can be heard. He is coming closer. As his old speeches on cultural nationalism echo all around, a convoy of tanks speeds past him. The tanks have secured the discourse on nationalism and culture has done the same with the cow. The patriarch’s stance conveys his diffidence. He starts speaking haltingly and then raises the pitch of his voice. Then he starts sobbing. But his voice is drowned out by the tanks’ rumble. So long is the convoy that he lapses into silence again.

The film camera swerves from the tanks to capture the old man in a close-up. But that is the founder of BJP, Advani! What is he doing on Rajpath and that too with Guru Dutt’s shawl draped around his shoulders? Look, he has opened his arms wide and is looking towards Raisina Hill as if making the actor’s classic refrain his own – ‘yeh duniya agar mil bhi jaaye toh kya hai’ (what does it matter even if the world were to be within my grasp?).

At a distance, the president’s entourage, flanked by red-liveried cavalrymen, is seen to be moving towards parliament.

Gradually, another figure comes into the frame. It’s Deepak Chopra, charioteer of Advani’s rath and an incomparable companion of Advani’s loneliness. Chopra is looking towards Advani. In his hand is a diary containing the names of those who once used to queue up for appointments with Advani. The same names are meeting somebone else these days. From the direction of Raisina Hill a reporter comes running. Deepak ji, why are you with Advani ji and not with the rest of them in parliament, he asks.

The camera is fixed on Deepak’s face. His lips are drawn in a half grimace. The unfathomable dark depths of his eyes reflect the image of a broken chair – the power that is not – as well as some old photo frames showing Advani meeting important leaders. Eyes partly closed, a smile playing on his lips, his hands are clasped in the traditional form of greeting. Every frame has Deepak Chopra in it.

The reporter has got the answer he wanted. He now asks a second question. Will Advani ji speak up now? Is he isolated? Does he cry? Has he been silent all day? Does he get any visitors? Why is the founder of the party enduring his displacement so? Is all of this a Congress conspiracy? Deepak Chopra remains silent.

The director says ‘cut’ but does not call for pack-up. He tells his team to wait and see which way the old man turns from Rajpath or if he remains rooted to the spot for eons. The assistant director asks, sir, are we shooting with sound or without? The director replies, if I had wanted sound, I would have been in parliament where the new president is being duly welcomed to the sound of brand new slogans. I have come here to shoot the deafening silence – to capture the fear etched on Advani ji’s face this very moment. That fear itself is his silence.

Suddenly a page from Advani’s blog enters the camera frame in a close-up shot, with the words ‘A Man of Words and Action’ written on it. Sir, will this be the title of the film, asks the assistant director. No, replies the director. The film will be titled, ‘A Man of No words and No Action’.