The uneven data, uneven quality of data and uneven access to existing data have together made it difficult to validate various claims made by political leaders and other commentators. 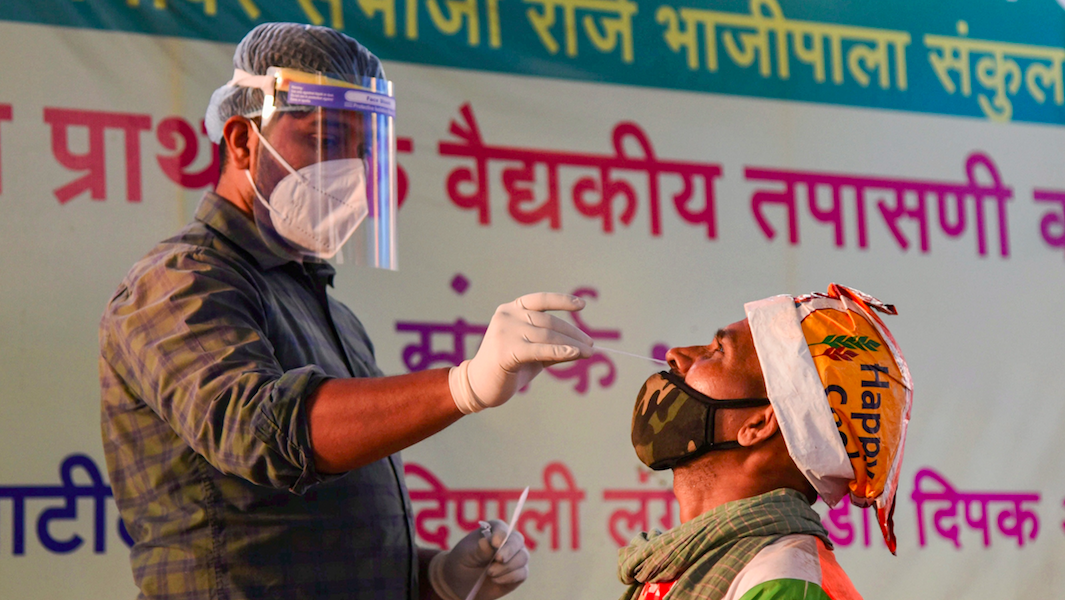 A medic takes samples from a man for COVID-19 testing, at APMC market in Navi Mumbai, Friday, March 5, 2021. Photo: PTI

India’s new surge coincides roughly with the continuation of the first phase of its vaccination drive as well as the start of the second, on March 1. As of March 6, 19.1 million vaccine doses had been administered. The Union health ministry has also announced that Armed forces veterans and their dependents will be able to receive vaccine doses from this week.

Experts are currently trying to understand the cause of the localised outbreaks. Last week, Rajib Dasgupta, a professor of community health at the Jawaharlal Nehru University, New Delhi, told Reuters that India had “multiple epidemics within the country” and that the entire population is not uniformly susceptible. “In this phase, the emphasis has to be a lot more local, a lot of local capacities will be put to test,” he added.

There is also widespread concern about new variants of the novel coronavirus circulating through the population. “After COVID-19 cases spiked in Maharashtra in late January 2021, the B.J. Medical College in Pune reportedly identified the so-called E484K mutation in one patient sample from the Amravati district and the N440K mutation in a sample from Yavatmal,” Priyanka Pulla reported last week. “The findings sparked speculation that these mutations may be behind Maharashtra’s climbing cases.”

However, it remains too early to say if the new variants can explain the increasing number of COVID-19 cases by themselves. One reason is that an Atmanirbhar Bharat policy the government hastily introduced in May 2020 undermined a government-supported effort to study these variants and their behaviour in people, and led to a cascade of other challenges that stranded the project in a limbo.

This said, understanding the current status of India’s COVID-19 epidemic was never easy because the country has hosted multiple outbreaks across its states that rose, peaked and fell at different times. The detection rates have also been uneven – as have the regional seroprevalence survey data and availability of local data about excess or deficient mortality.

Murad Banaji, a mathematician at Middlesex University, London, interested in disease-modelling, reasoned based on the results of the third national seroprevalence survey that India’s ability to detect new infections after the national peak, September 19, 2020, may have declined. The survey reported a seroprevalence of 21% in adults and 25% in those aged 10-17 years, suggesting a case-to-infection rate of around 3.5%.

According to Banaji, the drastic increase in seroprevalence between the second and third surveys suggests that the epidemic shifted from cities to rural areas by December, where considerably poorer case and death surveillance allowed officials to underestimate the scale of spread. “A very significant number of people were infected with COVID-19 in rural areas, even as the national situation was improving,” he wrote.

Mohana Basu reported for The Print on March 5 that India’s basic reproductive number, R0, had increased to 1.06 – after dipping to 0.93 in late November and rising to 1.02 in the last week of February. However, Banaji cautioned, “With most early spread occurring in cities and additionally better surveillance in cities, the early case and death data on COVID-19 nationwide was predominantly urban data. It is this urban data on which national estimates of R0 [were] based.”

The uneven data, uneven quality of data and uneven access to existing data have together made it difficult to validate various claims made by political leaders and other commentators. For example, the Government of India has celebrated the fact that the data shows fewer people died due to COVID-19 in the country than expected. On the flip side, alternative explanations for this anomaly – including poor death surveillance in rural areas – continue to remain viable because independent experts don’t have the exact data they need to validate or invalidate this claim for different parts of India.

On the other hand, Delhi health minister Satyendar Jain responded to a health ministry briefing that included Delhi among eight states reporting the most new COVID-19 cases in the country saying the Delhi government believes “the pandemic phase is ending” and that the outbreak is on the cusp of its endemic phase. Delhi reported its highest number of new cases in over a month on March 5, according to NDTV, and currently has a test positivity rate of 0.5%.

However, “the decision about whether it is a pandemic or endemic has to be taken by scientific bodies like the WHO or the Indian Council of Medical Research,” the president of the Indian Medical Association, J.A. Jayalal, told the news channel. “It cannot be a political decision and we cannot loosen our grip and guard against coronavirus infections at this crucial point. It can be disastrous.”