Lack of Adequate Planning Led to the Oxygen Crisis. That Needs to Change Now.

There has been no accountability and moral responsibility, as is usually the case in our country. 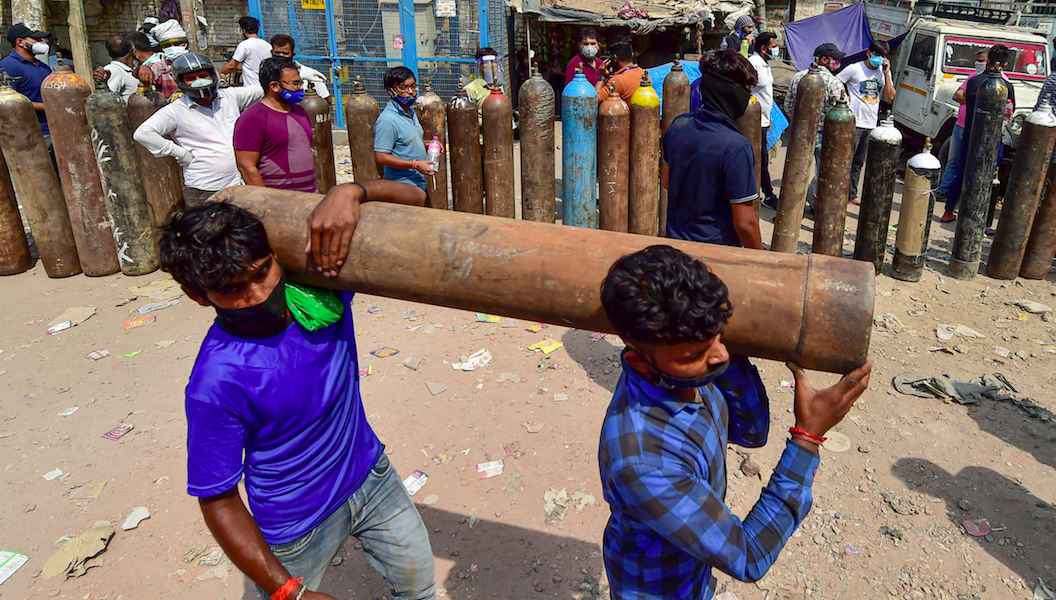 Family members of COVID-19 patients wait outside an oxygen-filling centre to refill their empty cylinders, as demand for the gas rises due to spike in coronavirus cases, at Naraina, in New Delhi, Tuesday, April 27, 2021. Photo: PTI

India seems to be running out of breath. More specifically, it is running out of oxygen supply to hospitals for critical COVID-19 patients, whose numbers are growing by the day.

There have been reports across the country of people dying due to oxygen shortages. In the national capital, two different hospitals have reported about 50 deaths due to the non-supply of critical oxygen on time. Many people requiring a hospital bed are not being admitted, as hospitals have no further capacity or oxygen.

Heartbreaking videos of patients crowding outside hospitals, with their crying kith and kin, are being beamed on TV channels, scaring the common citizen. These scenes are splashed across the globe, with many loudly proclaiming that India has failed to control and manage this virus. We must accept the truth rather than blame each other or behave like an ostrich. For example, in a big state like Uttar Pradesh, the chief minister’s announcement that everything is under control is contradicted by the pictures on the channels. How long will we live in denial and play politics?

It has been a clear case of lack of foresight, planning, execution and monitoring, highlighting mismanagement and political games. There has been no accountability and moral responsibility, as is usually the case in our country. Some heads must roll to begin with, and at least some in the political leadership should resign on moral grounds. How long can we have the sole example of Lal Bahadur Shastri, who resigned as railway minister about six decades ago due to some railway accidents? Has our conscience died?

For the current mess, admittedly there is shortage of oxygen from the adjoining sources for the requiring states like Delhi compared to the sudden surge in demand, though there is no dearth of overall production of oxygen in the country. However, the problem is of logistics. Most of the big plants producing liquid oxygen are in West Bengal and Odisha, and a few in the country’s west, but these are distant for many states like Delhi and it takes days for oxygen to reach by road or rail as liquid oxygen can’t be brought by air. Then there are not sufficient cryogenic tankers to carry this oxygen by road. The turnaround period is long.

The question naturally arises why there no foresight to tackle these issues when the situation eased after the first wave. A simple look at the map clearly shows that supply points are just in one area, only which can’t cater to the whole country. The example of the second and subsequent waves in Europe was also there to see, plan and act urgently. Yes, there is an empowered group of secretaries who flagged the issue a year earlier, the Central government also issued a tender for installing 150 oxygen plants in hospitals and state governments were entrusted with some responsibilities regarding execution – but only 33 plants have come up so far, including just one in Delhi.

Why was this execution not monitored? In the case of Delhi, when the Central government has allocated a quota of oxygen to Delhi (though it may be less than required due to less availability), it is for the Delhi government to pick it up and distribute it efficiently, but its micro-management is poor. It also doesn’t have even a single cryogenic tanker to bring liquid oxygen from far-off plants. Why? The Delhi government and Central government are only blaming each other. Same with other opposition-ruled states. Delhi and the Centre have now started importing necessary materials but the situation will take time to ease. Meanwhile, hoarding and blackmarketeering of oxygen cylinders and remdisivir injections is going on by unscrupulous elements.

Also read: COVID-19: The Adityanath Government Has Moved From Denial to Intimidation

The Supreme Court and the high courts have been also shouting in the meanwhile but to no avail. The Supreme Court has now asked the Central government for a national action plan to deal with this problem. Any action plan about oxygen should ensure that all major hospitals in the country have oxygen plants, which should also cater to the neighbouring small hospitals. Big liquid oxygen plants should be set up in all regions of the county in addition to the east and west. Each state government should have a sufficient number of cryogenic tankers. Also, it is important to fight air pollution in big cities on priority as this affects lungs, leading to more demand for oxygen in such situations. This plan should also include plans to deal with other concerned issues.

The required number of beds are also not there and the demand is increasing by the day. Many temporary centres opened last year after the first wave and were closed earlier this year when the situation eased, dreaming that all is well now. This short-sightedness has boomeranged and now officials are struggling to make these operational again.

To manage these additional beds, another problem looming large is the non-availability of the additional number of doctors, nurses and paramedics and they are just not there. In Delhi, patients were seen leaving a newly opened COVID-19 centre as there were no doctors and nurses. The existing ones elsewhere are overworked, tired and exhausted. A solution to this problem has also to be found on priority by some out-of-the-box thinking, and many solutions are being suggested by the experts.

All this action should be taken on a war footing with time-bound execution and monitoring, with cooperation among the Centre and states. We may have more waves of this pandemic, leading to an all-round collapse of our medical infrastructure. Many would want that to happen as they have their own agenda. Already, the criticism of the Central leadership is increasing by the day, partly for good reasons and the rest by vested interests. So, the time is to act now. Let politics be kept out of this for the sake of Indians’ lives.