BJP's Sukanta Majumdar and several news outlets had initially claimed that both attacks on the Vande Bharat Express had taken place in Bengal. Only one had. 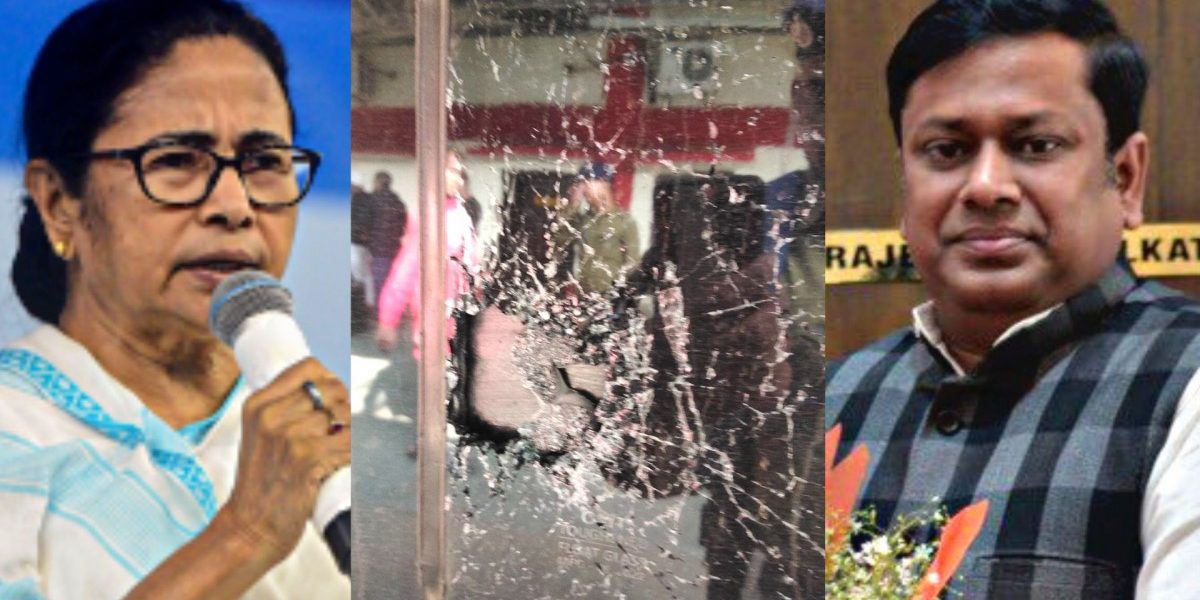 (From left) Mamata Banerjee, images shared on social media of a broken window pane on the Vande Bharat Express, and Sukanta Majumdar. Photos: File and Twitter.

New Delhi: Kolkata Police have registered a first information report against 10 journalists and the state Bharatiya Janata Party chief for allegedly fake reports on an incident where the Vande Bharat Express was pelted at with stones last week.

West Bengal chief minister Mamata Banerjee, who heads the Trinamool Congress party, had earlier criticised the news reports on the incident, calling them “fake news” and threatening legal action against those who spread it, PTI has reported.

The Howrah-New Jalpaiguri semi-high-speed train was first pelted at with stones by bystanders while it was passing through West Bengal’s Malda district on January 2. On January 3, as well, it was pelted at with stones. Initial reports, along with tweets by BJP leaders, claimed that the January 3 stone pelting had taken place in Bengal too.

BJP’s Bengal chief Sukanta Majumdar had tweeted that the second stone pelting took place at “Phansidewa near Darjeeling district”. Several news outlets and agencies, including ANI which Majumdar had cited, reported the same. To local media, Majumdar had said that such attacks could affect Bengal’s chances of “getting more Vande Bharat trains.”

The train had been inaugurated by Prime Minister Narendra Modi on December 30, 2022. News of the attacks had triggered back and forth between the ruling TMC and opposition BJP in the state.

The Eastern Railways later made it known that after scanning video footage, it found that the January 3 incident took place in Bihar’s Kishanganj. It was after these findings were revealed that CM Banerjee issued her threat of legal action against the journalists and BJP man, “for giving West Bengal a bad name.”

Among journalists mentioned are unnamed correspondents of the digital wings of India Today, Times Now, Republic Bangla, along with Kamalika Sengupta of CNN News 18, Puja Mehta of Zee News, Sreyoshi Dey of The Print, Nikhil Chowdhury (identified as a ‘TV journalist’), Indrajit Kundu of India Today, Angshul Saxena (identified as a ‘political analyst’), and Tamal Saha of Times Now Digital.

The FIR against journalists & me just for reporting Vande Bharat stone pelting in Bengal shows the condition of democracy under @MamataOfficial rule.

I'm not afraid of TMC's dirty tricks & ready to face a legal battle but cases against journalists should be scrapped asap. pic.twitter.com/yuawmSFzdu