Data shows that post demonetisation – announced on November 9, 2016 – the number of fatal instances in Kashmir have in fact gone up. 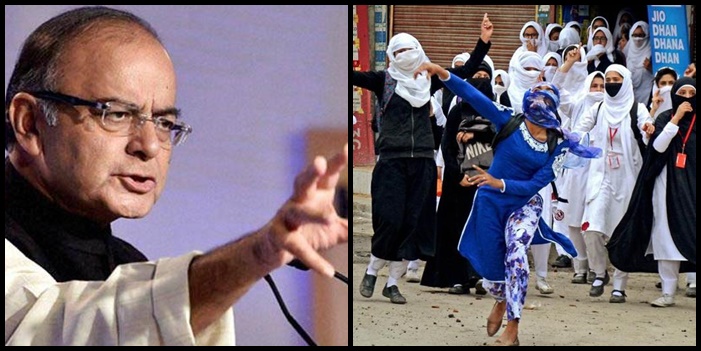 New Delhi: Union finance minister Arun Jaitley on Sunday claimed demonetisation has left the Maoists in many parts of India and separatists in Jammu and Kashmir “fund starved”. He said this had greatly reduced the number of protesters taking part in stone-pelting in the Valley. “Stone pelters used to gather in thousands on the streets of Kashmir before demonetisation was announced, but now not even 25 come together for such agitations,” he said.

However, data from the authoritative South Asia Terrorism Portal and recent media reports show a different picture from what the finance minister has tried to paint.

Incidents of stone pelting in the Valley have continued throughout the post-demonetisation period and were reported last month too. On July 21, for example, the Hindustan Times reported that the army opened fire at a mob of stone-pelting protesters in Kashmir’s Budgam district.

A month earlier, on the day of Eid – June 26 – a dozen people were reportedly injured in Baramulla district as protesters pelted stones. That day, protests took place across Kashmir, in Anantnag, Shopian, Kulgam and Pulwama districts. A Hindustan Times report said that Ramzan this year had been the bloodiest in the recent past with 43 people killed in the month between May 28 and June 26. The numbers include security personnel, militants and civilians.

Lashkar-e-Tayyaba’s Anantnag district commander Bashir Lashkari was allegedly killed by security forces on July 1. The next day, 20,000 people attended his funeral in his native village in Kokernag.

Data shows that post demonetisation – announced on November 8, 2016 – the number of fatal incidents have in fact gone up compared to the previous year. Between November 9, 2016 and August 13, 2017, data shows that there have been 93 incidents leading to deaths in Kashmir, including security forces, militants and civilians. During the same time period in the preceding year (November 9, 2015 to August 13, 2016) there had been 70 such incidents.

When it comes to the insurgency in Chhattisgarh, in the post-demonetisation period between November 10, 2016, and August 13, 2017, the number of encounters that have led to deaths – of civilians, security forces or Maoists – is 60. In the same time period in the preceding year, the number stood at 65.