No such order has been issued for government job applicants in the Hindu-majority Jammu region. 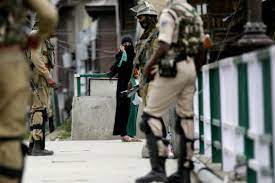 Srinagar: After terminating employees allegedly without holding a fair probe, the Jammu and Kashmir administration has now asked the police to deny “security clearance” to residents of the Kashmir Valley who are involved in “crimes prejudicial to the security of the state”.

The latest order issued by the Criminal Investigation Department (CID) of the J&K Police will also prevent Kashmiris who have been booked under vague criminal charges from leaving the country.

No such order has been issued for applicants in the Hindu-majority Jammu region.

In a circular on July 31, Amod Ashok Nagpure, Senior Superintendent of J&K Police, CID, has ordered the field units of the Special Branch (SB) in Kashmir to “specifically” look into “law & order”, “stones pelting” and other charges before issuing clearance to “subjects” who have applied for government employment, a passport, etc.

The SB operates under the CID through field units located in almost every area of J&K, wherever there is a police station. The branch deals with verifying the antecedents of residents who apply for jobs, government schemes and contracts, passports, etc.

According to the Jammu and Kashmir Civil Services (Verification of Character and Antecedents) Instructions, 1997, the CID is tasked with verifying the character and antecedents of candidates in J&K who have passed the qualifying exams for government employment.

The J&K administration amended rules regarding the appointment of new employees on June 21 this year. As per a government order, Instruction 2 was inserted into the Jammu and Kashmir Civil Services (Verification of Character and Antecedents) Instructions, 1997 which made CID verification mandatory for government employees.

“The appointing authorities, on the receipt of attestation forms from the candidates shall forward these forms with a covering letter (sealed and marked secret) in the form prescribed to this Government Order directly to the CID Headquarter for conducting the verification of the Character and Antecedents of the selectees,” the order said.

The service instructions make it mandatory for recruitment agencies such as J&K’s Service Selection Board to submit the list of candidates, who are selected for government employment, to the J&K Police’s CID wing.

After receiving the list, the CID has to wrap up the verification process within a month, which can be extended to not more than two months.

“All the field units of CID SB-Kashmir are hereby directed to ensure that during verification related to passport, service and any other verification related to Government service/schemes, the subject’s involvement in law & order, stone pelting cases and other crime prejudicial to the security of the state be specifically looked into and same must be corroborated from local police station records,” the latest circular states.

“Also digital evidence like CCTV footage, photographs, videos and audio clips, quadcopter images available in the records of the police, security forces and security agencies be also referred. Any subject found involved in any such cases must be denied the security clearance,” the circular, which has been marked to the additional SSP and all DySPs of the CID SB, notes.

The police circular comes amid reports that the CID has identified 5,362 employees in J&K who have recently entered government service without getting the mandatory security clearance.

Official sources said many of these employees were recruited under the previous PDP-BJP government, which collapsed in 2018, and they are already withdrawing salaries and other allowances.

Among them are officers from the Jammu and Kashmir Administrative Service and others, some of whom are working in ‘sensitive’ positions.

According to reports, the unverified employees include an assistant commissioner, an executive magistrate, block officers and others who have been posted in six departments of the J&K government.

“Most of these employees have been recruited by the revenue department and law department, and they continue to draw salary and allowances, even though the rules for their recruitment have been bypassed,” a senior officer in the General Administration Department (GAD) said.

Earlier, the J&K administration had instructed all the departments to provide a complete list of employees whose CID verification has not been done. They were also asked to stop the salaries of these employees.

Sources in the administration said some of the departments have completed the exercise and the list is being shared with the CID.

“Once we get their verification certificate, they will be fully inducted into service. If the security clearance is denied, then their recruitment process will be terminated,” the officer in GAD said.

The latest circular is also going to prevent people of J&K who are involved in activities “prejudicial to the security of the state” from leaving the country, as their passport applications and renewals are going to be turned down.

While the J&K police have been denying security clearance to people involved in militancy and separatism or their kin who apply for passports, this is the first time that the order has been made public.

Commissioner secretary GAD, Manoj Kumar Dwivedi, could not be reached for comment. The story will be updated if and when he responds.

The police circular comes weeks after the administration terminated nearly two dozen employees who have been accused of working “against the security of the state”, allegedly without giving them a chance of fair representation.

Activists fear these decisions will impinge on the freedom of speech and expression in J&K, where space for dissent has been choked already since the reading down of Article 370 in August 2019.

The decision to terminate employees without a fair probe had also come under the scrutiny of the opposition parties, including the National Conference and People’s Democratic Party, who have accused the LG’s administration of targeting employees for their political beliefs.

In April, the administration set the ball rolling to purge the Union Territory’s administration of employees “in the interest of security of the state” using a clause in Article 311 to bypass the requirement for formal inquiry.

LG Sinha’s administration had set up Special Task Force to “scrutinise cases of employees suspected of activities requiring action under Article 311 (2) (c)” headed by J&K’s intelligence chief R.R. Swain, who served for a decade in RAW before returning to J&K.

A committee headed by J&K’s chief secretary was set up last year to formulate the procedure for invoking Article 311 (2) (c) against employees who are found involved in criminal offences.

The grounds for an employee’s dismissal “shall be supported by…interrogation report and other collateral evidence to justify dispensing with the holding of an inquiry in the interest of security of the State,” Sinha had said in an order last year.

Invoking Article 311 of the Indian constitution, the J&K administration has so far terminated nearly two dozen employees including two sons of Hizbul Mujahideen supremo Syed Salahuddin for their involvement in ‘anti-national’ activities.

An assistant professor and two teachers, including a woman from south Kashmir who was appointed by the government after her father was allegedly killed by Ikhwan, a state-backed militia that operated in J&K in the early 1990s, were also terminated without a fair probe.