He Voted, Never Hurled Stones, 'What Was My Crime,’ Asks Army's 'Human Shield' in Kashmir

Farooq Ahmad Dar says he was beaten with gun butts and wooden sticks, and paraded through many villages while tied to the jeep. 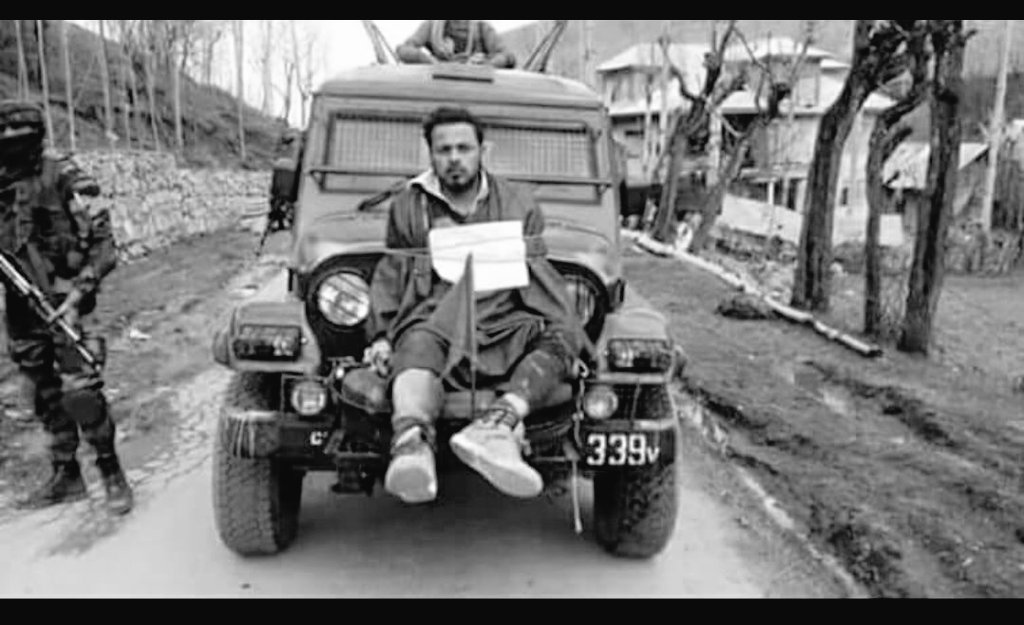 Farooq Ahmed Dar was strapped to the front of a jeep carrying soldiers in Beerwah, Jammu and Kashmir. Credit: Twitter

Srinagar: A civilian who is seen in a video tied to the front of an army jeep as a human shield in Kashmir’s Budgam district said he was paraded through several villages for nearly five hours before his family members and villagers got him released from the army’s custody in the evening.

The incident occurred on April 9 during the by-election for the Srinagar-Budgam parliamentary constituency. Eight civilians were killed in firing by security forces that day as mobs tried to attack some polling stations in the constituency, which witnessed the lowest ever turnout – 7% – in its electoral history.

Ironically, 26-year-old Farooq Ahmad Dar, a resident of Chil village in Beerwah sub-district, was among the few villagers who turned out to cast their vote on that day. He still has his voter slip serial number – 612 – to prove it.

Later that morning, Dar was riding his bike to attend a condolence meeting at his brother-in-law’s house in Gampora village when he was picked up by the army.

Narrating the incident, Dar, a shawl weaver, told The Wire that he was stopped by the forces in Utligam village, a few kilometres before Gampora, where some women were protesting against the elections.

“They damaged my bike, thrashed me severely with gun butts and wooden sticks and in an almost unconscious state tied me to the front of the jeep and paraded me through 10 to 20 villages.”

In the video, which has been widely shared on social media sites, Dar, wearing a pheran (a traditional winter cloak) and jeans, is seen tied to the bonnet of the moving army jeep which is being followed by an anti-mine vehicle and a bus ferrying army men. As the vehicles pass, a voice can be heard warning: “Aisa haal hoga pather waloun ka, yeah haal hoga (Those who pelt stones will meet the same fate).”

“There was no stone pelting going on in the area when the army men picked me up and neither did any stone pelting take place on the [army] vehicles when I was being paraded,” said Dar.

There was also a white piece of paper strapped to Dar’s pheran. “It had something written on it but I could only read my name,” he said.

In a state of shock, Dar, with his left forearm bandaged, said he believed that fact that he was still alive is a “miracle”. “At one point I had given up the hope of returning home alive… I thought all my bones have been broken as my entire body was in pain due to ruthless beating. I was in shock, not able to understand what do to as the forces kept threatening me in case I speak to anybody moving on the road. I was pleading with them to leave me but they wouldn’t listen,” said Dar, adding he was first taken to the CRPF camp at Hardapanzu village in the afternoon where he was bundled into a vehicle and then taken to the Raiyari camp of the local army unit.

“I thought my end is near but I kept praying and hoping that people who had seen me would inform my family,” said Dar, the youngest of three brothers who lives with his mother, Faizi Begum.

His elder brother, Fayaz Ahmad, told The Wire that when they came to know about the incident, they rushed to seek the police’s help to get his brother released. “But when we didn’t get any help from anywhere, some of our family members, including women, villagers and the local sarpanch approached the army camp in the evening. We pleaded with the army that he [Dar] is not a stone-pelter and it was only then that they allowed us to take him home,” said Ahmad.

Since his release, Dar said, he hadn’t left his house due to the continuous pain he is in. “I have never ever in my life hurled stones on forces. But I am not able to understand why I was beaten ruthlessly and then tied to the vehicle. What was my crime?” asked Dar.

The video, which is causing outrage in Kashmir, is now being investigated by the army.

Former chief minister Omar Abdullah, who represents the Beerwah constituency, describing it as “shocking”. “This young man was TIED to the front of an army jeep to make sure no stones were thrown at the jeep? This is just so shocking!!!! #Kashmir,”Abdullah tweeted. “A warning can be heard (in the video) saying stone pelters will meet this fate. This requires an urgent inquiry and follow up NOW.”

This young man was TIED to the front of an army jeep to make sure no stones were thrown at the jeep? This is just so shocking!!!! #Kashmir pic.twitter.com/bqs4YJOpJc

Chief minister Mehbooba Mufti, whose government is facing criticism for the deteriorating situation in the Valley, sought a “detailed report” from the police about the incident.

The Union defence ministry has also ordered an investigation into the incident. “We are investigating the whole issue and at the same time the contents of the video are being verified as well,” Colonel Rajesh Kalia, the ministry’s Srinagar-based spokesman told The Wire. Although the J&K police have also registered a case in the incident, a senior official said that till the investigation was completed “nothing can be concluded from it”.