With Detention Orders Like These, the State in Kashmir Is Itself Breaking the Law

Apart from violating procedures laid down by the Supreme Court, the bonds that magistrates are asking detenues to sign are not sustainable, legally or morally.

Safiya and Suraya, daughter and sister of Farooq Abdullah during a protest demonstration against the reading down of Article 370, in Srinagar, during which they were detained. Photo: Mudasir Ali

I recently attended an interactive session with some officers of a tribunal with a view to understanding the problem of expeditious implementation of the law of compensation. When some issues arose for discussion, I asked, in all simplicity, what the confusion was when the Supreme Court had already settled the law and all that was required of them was to follow it.

When they appeared unmoved, it struck me that law – in their perception – was a matter to be argued and followed by others while they remained untouched by it. They gave the impression that they were outside the purview of law – as opposed to being above it – and that they would continue to stall the benefits of a precedent.

This, in sum total, is the typical attitude of our law enforcing agencies and is the main reason for the erosion of public faith in virtually all institutions.

That is why I believe that one of the biggest sources of lawlessness are the law enforcers themselves. I know this sounds naïve and simplistic but this is my opinion based on experience.

Consider, as an example, the kind of orders being passed under Section 107/117 of the Code of Criminal Procedure (CrPC) in Jammu and Kashmir since the reading down of Article 370 of the constitution on August 5.

According to media reports, an indeterminate number of people – including politicians who have regularly contested elections – have been held under what is called ‘administrative detention’. The Union home ministry has said it is not in a position to provide any information about the number of people being held or the legal provisions invoked against them. Many are being asked to sign bonds as a condition of release but there are reasons to doubt the legality of the procedures being followed.

Let me explain why.

Section 107/117 forms a part of Chapter VIII of the CrPC, which contains provisions for preventive action to be exercised by sessions court magistrates, both judicial and executive.

The CrPC envisages negligible executive interference, except in situations of controlling law and order – which is specifically incorporated in Chapter VIII. Thus, Section 107 CrPC empowers an executive magistrate to bind a person as a preventive measure – if he is satisfied on information that such person is likely to commit a breach of the peace or disturb public tranquillity – for a period not exceeding one year.

How the magistrate is to go about using this power is spelt out in the Chapter’s subsequent sections. Under Section 112, he is enjoined to record the substance of the information, sureties to be furnished and period of bond. If the person is present in court, the order has to be read out to him under Section 113. If not, he can issue summons/warrants of arrest under Section 114. The magistrate also has the power to pass an interim order for execution of bonds under certain contingencies under Section 117, and after the entire trial he can pass a final order under Section 118. The trial is to be conducted as a summons trial.

I may explain here that different modes of trials have been prescribed in the CrPC depending on the gravity of the offence.

In a case of summons trial, the first procedural step is that the magistrate explains the substance of the accusation to the person appearing before him, whereafter, if he does not plead guilty, witnesses on behalf of prosecution and then defence have to be examined.

Here it would be germane to mention there are certain authorities on the subject which make it mandatory for the magistrate to record his subjective satisfaction at the stage of 112 when initiating a proceeding, also that a show cause notice has to be given to the proposed offender, who has a right to audience when he appears under Sections 113/114. If the magistrate feels it expedient that the person execute interim  bonds under Section 117, he can do so but not without holding an inquiry.

This scheme was extensively  discussed by a special bench comprising seven Supreme Court judges in the case of Madhu Limaye, a prominent political leader of the Samyukta Socialist Party of India, while considering the legality of Chapter VIII  and whether it offended Article 19 of the constitution, which guarantees freedom of speech, assembly, movement etc.

As it happened, Limaye had gone to Varanasi in 1970 where he was arrested by the SHO, Cantonment Police Station. When he was produced before a magistrate on July 9, 1970, the police explained that there was apprehension of breach of peace and therefore he was arrested under Section 151 CrPC. The prayer to the magistrate was that, in order to maintain peace, he be bound under Section 107/117 CrPC as an interim measure. The next day the magistrate noted:

“I have seen the police report dated 9.7.1970 and I am satisfied that there is an apprehension of breach of peace and public tranquillity from the side of OPs No 1 and 2 who are active members of SSP engaged in land grab movement and wrongful acts to public property and in my opinion there are sufficient grounds for proceeding under section 107 CrPC for the prevention of breach of peace and public tranquillity. A notice u/s 112 CrPC has been read over to Ops 1 and 2 today to calling upon them to show cause why they should not be ordered to execute bonds…for a period of one year.”

The magistrate then required them to execute bonds under Section 117 CrPC. It appears that thereafter he kept on postponing the proceedings. Meanwhile, Limaye challenged his order before the Supreme Court.

The special bench set aside the order. While doing so, it notably stressed on the importance of strict compliance of the procedure because “the liberty of the person is involved, not because of anything he has done but because of the likelihood of breach of the peace or disturbance of the public tranquillity by reason of some act on his part…”. And further, ”Since the action is taken on the mere opinion of the magistrate, the provisions of the Chapter naturally ensure that no harassment arises.”

It then went on to hold that the magistrate could ask for an interim bond if he could not complete the inquiry but he could not postpone the case and yet ask the petitioners to furnish the bond for good conduct. The magistrate ought to have entered upon an inquiry and at least prima facie satisfied himself about the truth of the alleged facts and could not have asked them to execute a bond without an inquiry.

The Supreme Court bench further held that such action was not in conformity with the procedure prescribed for summons trial, which postulates that after explaining the substance of the accusation the magistrate is to examine witnesses. The bench said, “It was not given to the magistrate to postpone the case and hear nobody and yet ask the petitioners to furnish a bond for good conduct.” It noted that none of the witnesses in the challan were examined, nor was any statement recorded and hence proceedings for asking for an interim bond were completely illegal.

What can be more clear than this?

Interestingly the Supreme Court remarked that “the magistrate was too much in a hurry. He did not read the law to inform himself about what he was to do. Having the petitioners before him and having read to them the order under Section 112, it was his duty to either release them unconditionally or to ask them to give an interim bond for good conduct, but only after he has started inquiring into the truth of the information.”

Therefore, as far as procedure is concerned, this is the law laid down and any infraction by anyone, according to me – including a law enforcer – puts him in the category of an offender.

In this background, let us look at an example of the kind of actual orders that are being passed in Kashmir. It reads somewhat like this:

Whereas, as per report received from SHO P/S Kothibagh dated 15.10.2019 Proceedings under section 107 CrPC for detention of ………… in view of apprehension of peace.

The report were examined (sic) and in view of prevailing situation in the region and likely activities which could disturb public order or could be prejudicial to maintenance of peace and order. This could be further endanger public life and property. (sic)

Whereas, the detenue through her representative / relative has signed a bond under section 107 CrPC read with 117 CrPC where it is undertaken that she will not make any comments(s) or issue statement(s) or make public speech(s) hold or participate in public assembly(s) related to the recent events in the State of Jammu and Kashmir, at the present time, since it has the potential of endangering the peace and tranquillity and law and order in the State or any part thereof for a period of one year from the date of signature of bond.

Whereas, she has further undertaken to deposit and an amount of Rs 10,000 as surety (sic) and in case of default of breach of this bond she will pay another amount of Rs 40,000/- as surety to the State of Jammu and Kashmir.

Therefore, keeping in view the above facts and circumstances, the undersigned is satisfied that the detenue will not breach peace and tranquillity and disturb the law and order in District Srinagar. It is hereby ordered that said ………may be released immediately from detention from Central Jail, Srinagar and he or she may be directed to attend the Court of Executive Magistrate, 1st Class, South Sgr on 24.10.2019.

As far I could decipher, the police report appears to be dated October 15, 2019, and the magistrate’s order is dated October 16, 2019. Therefore, in this case too, as in the case of Madhu Limaye, the magistrate appears to have been in a tearing hurry and had not informed himself on the position of procedure and had acted in complete violation of the constitution bench decision, while asking the detenues to furnish interim bonds without a preliminary enquiry. 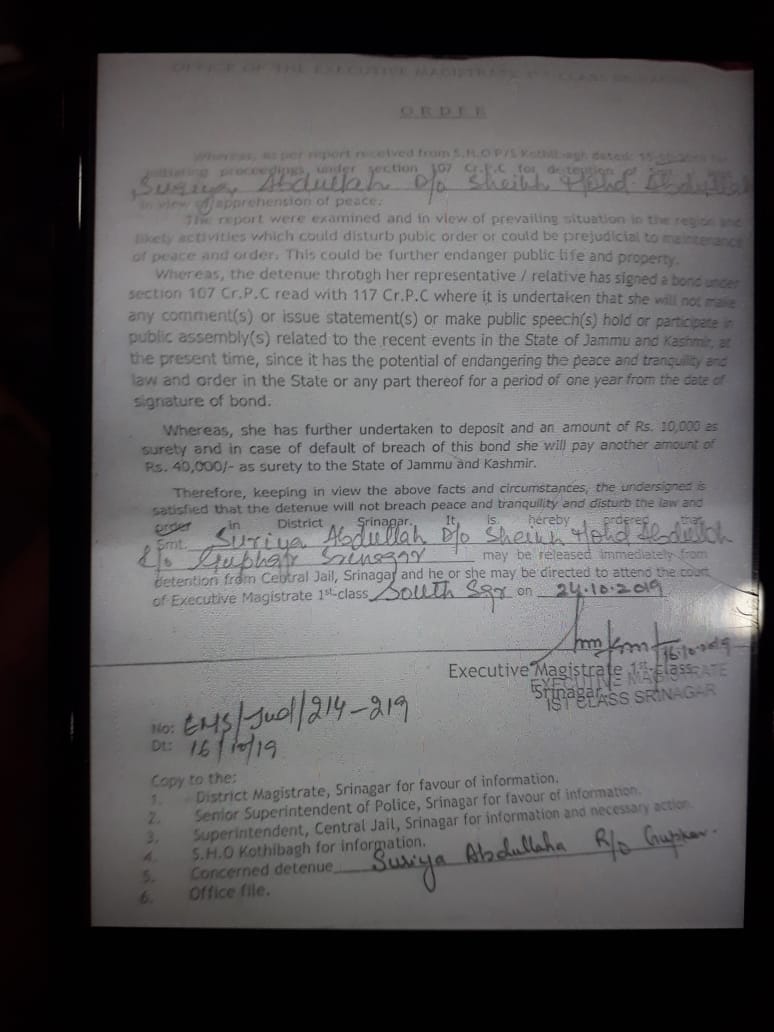 The end result of these kind of useless, illegal orders which encroach upon the liberty of a citizen is that they will be challenged in the higher fora, adding yet another figure to the pending cases. The valuable resources of tax payers will be consumed, just because a magistrate did not inform himself on the law of the land. Incidentally ignorance of law is no defence and thus it makes him culpable.

On the merits, it is worth noting that the version of the bond being used in Kashmir requires the released detenue not to make ‘any comments’ or issue statements or make public speeches or hold or participate in public assembly related to ‘recent events’ in the state of Jammu and Kashmir.

Unless one chooses to forget that we are living in a civil society governed by the Constitution of India, these bonds, according to me, are simply not sustainable – either legally or morally.

Anjana Prakash has been a judge of the Patna high court and a senior advocate of the Supreme Court.