The district administration in Srinagar has also barred manufacturers from supplying medical oxygen to private societies and NGOs, at a time when calls for oxygen supplies have shot up. 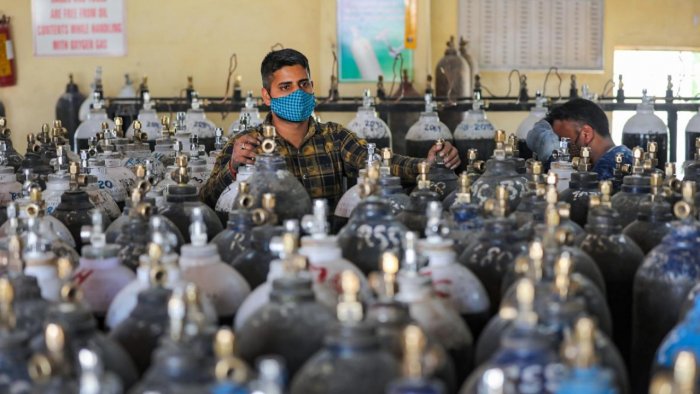 Srinagar: The authorities in Kashmir have issued directions to the health services department to desist from speaking with journalists even as its healthcare system shows signs of buckling under the weight of increasing caseload of new COVID-19 infections.

The district administration in Srinagar has also barred manufacturers from supplying medical oxygen to private societies and non-governmental organisations at a time when private volunteers are spearheading a number of citizen-led initiatives to fight the spread of virus across the valley. The supplies have been subject to prior approval from civil authorities.

Both orders have attracted criticism from members of the media fraternity and NGOs involved in meting out assistance to the patients. However, on Friday afternoon, at least two NGOs said they held a meeting with the civil administration in Srinagar and arrived at an agreement allowing for the procurement of oxygen without the cumbersome procedure of obtaining approvals daily. Aijaz Asad, district magistrate, Srinagar, did not respond to calls from The Wire.

Some journalists say the Jammu and Kashmir (J&K) government’s orders are symptomatic of the same authoritarian streak with which Uttar Pradesh chief minister Yogi Adityanath has been responding to the unfolding health crises in the state.

As of Wednesday, only three ICU beds were available for 12 lakh people at four tertiary care hospitals in Srinagar: one at Sher-i-Kashmir Institute of Medical Sciences (SKIMS) and another at Shri Maharaja Hari Singh Hospital (SMHS). Naveed Nazir, head of department, Chest Disease Hospital in Srinagar said that all 70 ventilators at the facility were occupied.

Parts of Kashmir are in the midst of a lockdown occasioned by the spike in the COVID-19 cases. In four districts including Srinagar, the lockdown has been extended till May 10.

The situation in Kashmir has not yet touched the same frightening levels as in Delhi, Mumbai or Lucknow but the volume of SOS calls and pleas for oxygen cylinders and vital medicines such as Remdesivir on social media suggest the widespread nature of the crisis in the valley.

There are around two dozen NGOs and a network of social media volunteers across the valley who are currently leading the effort to ensure availability of oxygen and other life-saving drugs. These citizen-driven initiatives are also acting as a buffer and preventing the kind of chaos which is plaguing the rest of the country where patients rush in to hospitals in large numbers, putting further strain on an already exhausted and inadequate healthcare system.

On Thursday, Aakash Hassan, a freelance journalist shooting a video for his story on the pandemic was stopped by the guards outside SKIMS. He and his colleagues were filming a scene where a patient who has just died of the virus was being loaded into an ambulance.

“They asked who allowed us to enter the premises of the hospital,” said Hassan who has written for The Intercept, SCMP, The Guardian and others. “I spoke to the medical superintendent of the hospital who casually refused the entry saying that journalists create scare and unnecessary panic.”

In the evening, an order from the director of health services in Kashmir clearly laid down restrictions on the medical staff warning them against speaking to the media persons.

“All chief medical officers/medical superintendents, block medical officers of Kashmir division are enjoined upon to issue instructions to staff under their administrative domain to desist from media interactions as it has been seen that contradictory and confusing messages are being circulated which misinforms the public and creates unnecessary and avoidable panic,” the order reads. “They will initiate strict disciplinary action against anyone indulging in such behaviour and shall further report of any disregard of these instructions by the officer/ official to this office also.”

The latest round of curbs on media reporting in Kashmir which already fares badly in the domain of press freedom has provoked a sense of angst among the media fraternity. Journalist Federation of Kashmir on Thursday termed the fresh move as “undeclared censorship.”

Also read: Modi Has Dehumanised Kashmiris Yet Again With the Arbitrary Sacking of Govt Employees

“There’s not a single story on pandemic that one can write without speaking to the doctors,” said Quratulain Rehbar, an independent journalist from Pulwama who writes for Article 14, Firstpost, The Caravan and others. “Government is preventing reporters from writing the facts. If we cannot enter hospitals or speak to doctors how can we bring out the truth about the situation? It limits us to the government version. Look at the stories that CNN and BBC are filing from Indian hospitals. Already foreign media is barred from entering Kashmir and on the top of that even regional journalists have been restricted from reporting freely on the health crises.”

Meanwhile, the dozens of NGOs addressing the SOS calls of shortage of oxygen and medicine said the order from Srinagar administration effectively stonewalls their work. “This order says we are supposed to take permission. How is that going to happen? Are we supposed to go in the middle of the pandemic and request the DC for supplies?” asked Ifra Jan, who is a volunteer with SOS Kashmir.

“How can I tell a patient gasping for air that they must wait for hours before I get the permission?”

SOS Kashmir is presently involved in harvesting supplies from refilling centres and reaching out to people sending online pleas. Jan said many NGOs who went to refilling centres on Thursday were told that supply would only resume after permission from civil authorities. “We had to send the patients to Khonmoh to get oxygen because that area is not within Srinagar precincts.”

Syed Fazal Kashani, another volunteer who supplies free oxygen to coronavirus patients said manufacturing units have stopped refilling their cylinders. “We provide 12-15 oxygen cylinders on an average in a day. After yesterday’s order, we tried to contact Srinagar authorities but there was no answer. We have been facing an acute shortage of oxygen. Also there’s a lot of disjunction between what different officials from civil administration are saying,” he said.

A family in Eidgah locality of Srinagar had contacted Kashani’s group on Thursday night demanding oxygen urgently. But they had run out of supplies and no fresh supplies were forthcoming. Kashani said they contacted a supplier from the Rangreth area of the city and were rebuffed. “We had to literally request another family in Srinagar to lend a back-up cylinder to us which we got delivered to the family who was in dire need,” he said. “The calls for oxygen supplies have grown to 400 per day.”

Afaaq Sayeed, a Srinagar-based businessman who runs Socio Reforms Organisation (SRO Kashmir) said the Srinagar district magistrate, Asad, had called him and several other NGOs to meet Friday afternoon. “As per the order, we were supposed to file requisitions every day and also furnish our previous day’s requirement. We told the district magistrate that this was an extremely cumbersome process. They shared some of their concerns regarding black marketing and hoarding. Ultimately, it was agreed that the DM will grant us an approval that we are supposed to renew after every seven days,” he said.

But a litany of concerns still linger. “When we are required to supply oxygen, it’s not for one or two patients. In most cases, it is the entire families that are infected and gasping for air. We ought to have enough back-up supplies to meet this situation. We also dispatch volunteers who refill cylinders and supply concentrators directly to homes. Does the government have an alternate system of volunteers who will do all this work?” Jan asks.

The COVID-19 caseload in Kashmir was a meagre 63 cases per day on March 1 this year. But then the government, driven by its objectives to project normalcy in Kashmir, held large scale public events at many gardens and parks in Srinagar. Prime Minister Narendra Modi tweeted photographs of the Tulip garden to his 68 million followers which led to visitors crowding these spaces in large numbers.

On April 1, the cases rose to 461 per day. In just a month’s time, they spiked exponentially to 3,832 cases per day on May 1. Around 289 people died due to COVID-19 in April across Jammu and Kashmir. It was only on April 27, the day when J&K logged a record high of 3,164 fresh cases – with 25 persons succumbing to COVID-19 in 24 hours and 100 in the previous 10 days – that administration banned the assembly of more than five persons in Srinagar.