Why Are the Armed Forces in Kashmir Plagued by so Many Suicides and Fratricides?

Stress, the daily threat of violence, issues their families are facing at home and long hours are pushing personnel to the brink, triggering the need for preventive measures. 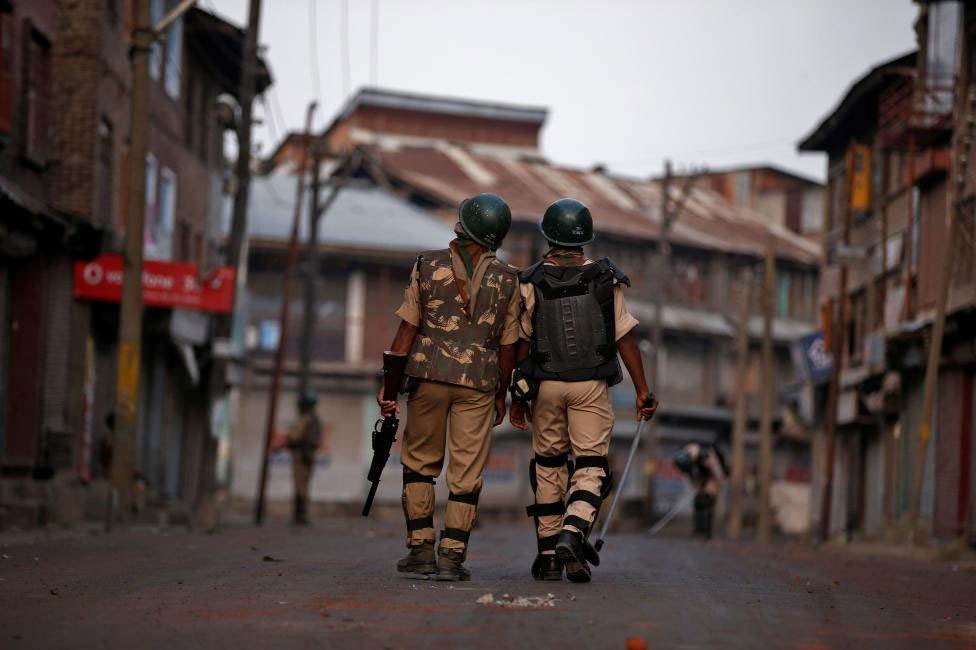 According to the Centre, 597 armed forces personnel lost their lives to suicide between 2008 and 2013. Credit: Danish Ismail/Reuters/ Files

Earlier, on the night of July 18, following an altercation, an army soldier pumped five bullets into Major Shikhar Thapa of the 71 Armoured Regiment close to the Line of Control in Jammu and Kashmir’s Uri sector. Thapa had pulled up the soldier for using a mobile phone while on duty, which triggered the fratricide incident resulting in the major’s death.

Suicides and fratricide incidents are not uncommon among CRPF and army personnel deployed in Kashmir. In May this year, an army soldier committed suicide by shooting himself with his service rifle in the Laam sector along the LoC in Jammu and Kashmir’s Rajouri district. In January this year, a CRPF soldier shot himself while on duty inside a camp at Tral town in South Kashmir’s Pulwama district.

Last year as well, incidents of suicides in the ranks of military and paramilitary forces were reported in the Valley. As per the 2016 human rights review compiled by Srinagar-based rights organisation Jammu Kashmir Coalition of Civil Society (JKCCS), as many as seven cases of suicide were documented in 2016. Out of the seven cases, four were from the army, including two officers of major rank, two BSF soldiers and one CRPF trooper. In 2015, as per the year-end JKCCS report, there were as many as eight cases of suicide by military, paramilitary and police forces. Out of the eight cases, four army personnel, one from the Air Defence Regiment, two from the CRPF and a policeman committed suicide. In 2014, there were 18 suicides of military and paramilitary forces and two incidents of fratricide, in which seven personnel were killed.

Also read: Should the Defence Ministry Be Sued for the Deaths of Soldiers?

According to data shared by the Centre in the Rajya Sabha in July 2014, 597 armed forces personnel lost their lives to suicide in the five years before that.

In December 2011, three CRPF personnel were killed and another critically injured in a fratricide incident at a camp in Kulgam, South Kashmir. Earlier that year in April, four army men, including a junior commissioned officer, were shot dead and another wounded by their colleague inside an army camp of the 42 Rashtriya Rifles in South Kashmir’s Bijbehara town.

In 2006, recognising the rising fratricide and suicide cases among the armed forces, the then defence minister had constituted an expert group of psychiatrists under the Defence Institute of Psychological Research in order to suggest remedial measures to prevent suicide and fratricide incidents. On the eve of the Army Medical Corps’ Foundation Day on December 29, 2006, then Vice Admiral V.K. Singh, director general of the Armed Forces Medical Service, had proposed a plan to recruit “400 psychiatrists of officer rank to cope with stress that has led to an increase in fratricidal killings and suicides.”

“Rest and recuperation centres have been set up in the northern Jammu and Kashmir region,” Singh had said then. “Soldiers from different units undergo stress-busting therapies of one week. Some people sit back and watch films, while others settle for some meditation.”

Over the last decade, incidents of fratricide have reportedly reduced in the army as the force has taken measures to address the issue. According to a recent Hindustan Times report, there were 12 cases of fratricide in 2012-15, compared to 23 cases reported in 2006 alone. Two years ago, the defence ministry had told parliament that “stress and personal/financial problems could be the triggers for such killing.”

An army major from Srinagar’s Badami Bagh Cantonment, who did not want to be named, terms the fratricide incidents as  ‘noiseless self-executions’ in the army’s rank and file. “Just because such deaths are yet to attain an alarming rate doesn’t mean that they aren’t troublesome,” says the major. “Our problem is our denial. While we are upbeat about the training and stress management techniques, yet these incidents happen and make a mockery of our efforts.” 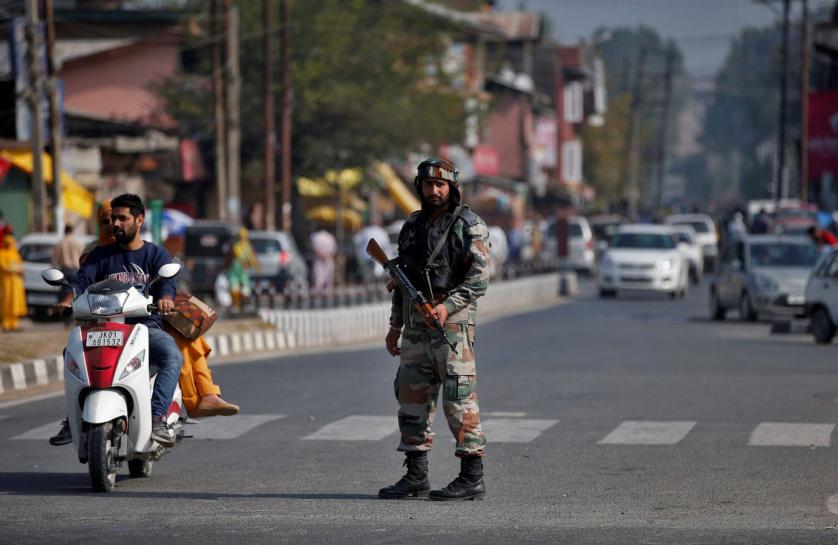 An Indian army soldier stands guard on a road on the outskirts of Srinagar, October 3, 2016. Credit: Reuters/Danish Ismail

He said the only way to sort out this mess is to “earnestly identity the grey areas and send our soldiers on regular sabbaticals so that this conflict won’t cut them loose.”

By conflict, the major meant the unrest in Kashmir. Recently, Indian army sources told the BBC that many soldiers are growing uncomfortable with their role in Kashmir, even fearing that they are effectively becoming an army of occupation. “We are fighting a legacy of political betrayal, infiltration, rigging in local elections, cynical politics, bad governance, vested interests, religion and regional divides.” an army officer was quoted as saying.

Much of this has to do with Indian army’s fierce engagement in counter-insurgency operations in the Valley for the past 27 years. Being a counter-insurgent might be a “much sought-after job” with incentives and benefits involved, but it comes with some unseen costs, the army major points out. “Our line of work is full of consequences. But for the sake of upholding the army’s pride, we often sweep the stress in our ranks under the carpet.”

A senior police official posted in south Kashmir says the main reason for fratricide and suicide among the armed forces in Kashmir is the “nepotism and biased behaviour” of certain commandants and higher officials towards their subordinates. As an example, he points at the rejection of leave applications of subordinates, especially during emergency situations back in their homes, while the higher-ranked officers and commandants themselves enjoy privileges and special benefits. “An armed policeman from Kupwara posted in Jammu could not get leave even when his father had died,” the police official says on the condition of anonymity. “He broke down and was disturbed for many days after he was denied leave. You can imagine his state of mind under such circumstances.”

“The Indian army, being the most professional and disciplined force in the world, has an evolved setup in place to de-stress its soldiers stationed in hostile combat zones like Kashmir,” says Colonel C.D. Prakash, who is stationed in northern Kashmir. “We hold regular recreational sessions and offer psychiatrist help to deal with any stress symptoms in our soldiers.”

According to him, the fratricidal and suicidal tendencies in soldiers aren’t that alarming. “It’s just that at times a soldier develops some fatal mindset given the frequency of confrontations in the place,” he says. “Rest, the morale of Indian army is very much high.”

Anshu Gupta, a psychiatric social worker, in his paper titled ‘Stress in Indian Army: A Psychological Perspective of Present scenario and Needs’, writes that the rising incidents of suicide and fratricide is a matter of concern for the armed forces, adding that the condition is worse in the state of Jammu and Kashmir and in the northeast region.

“Individuals face problems in adjustment right from the initial stage in the army due to shift from civil to army life,” Gupta writes in the paper. “There are new requirements which the military service lays upon the individual, resulting in conflict between social and personal needs.”

Citing many reasons for rising fratricide and suicide cases in the armed forces, Gupta outlines the main difficulties faced by the army personnel as loss of contact with friends and family, loss of an individual’s freedom, feeling lonely, being compared with counterparts, fear of death and getting wounded, and feeling guilty.

Experts and counsellors working towards addressing the psycho-social problems among the armed forced deployed in the state point at stress, separation from families, long duty hours and poor command and control structures as contributing factors for more than 70% of deaths in such incidents since 2001.

Noted Valley-based psychiatrist Arshad Hussain says that though the armed forces personnel are away from their families, they are getting constant updates on any problems at home thanks to cellphones and social media. “In spite of these tools of connectivity and communication, this can act as a double-edged sword when they connect the jawan with domestic problems and communicate distress on a daily basis to those who are unable to do much to resolve their family issues, being far away for long periods,” he says.