With the state and Centre maintaining a stoic silence over the move, rumours of abrogating Articles 370 and 35A are gaining ground.

Srinagar: Rumors are rife in the Valley that the Centre was up to “something” in the state after the Union home ministry decided to move in 10,000 additional troops to the restive region.

The widely talked about fear is that the Narendra Modi government, which returned to power this May with a promise to scrap Jammu & Kashmir’s special position, might abrogate Article 370 or Article 35A – the two constitutional provisions that give the state its distinct identity within the Union of India.

With each passing hour, the anxiety is deepening among Kashmiris, amid a stoic silence maintained by the state administration, which is presently under president’s rule, and the Centre. 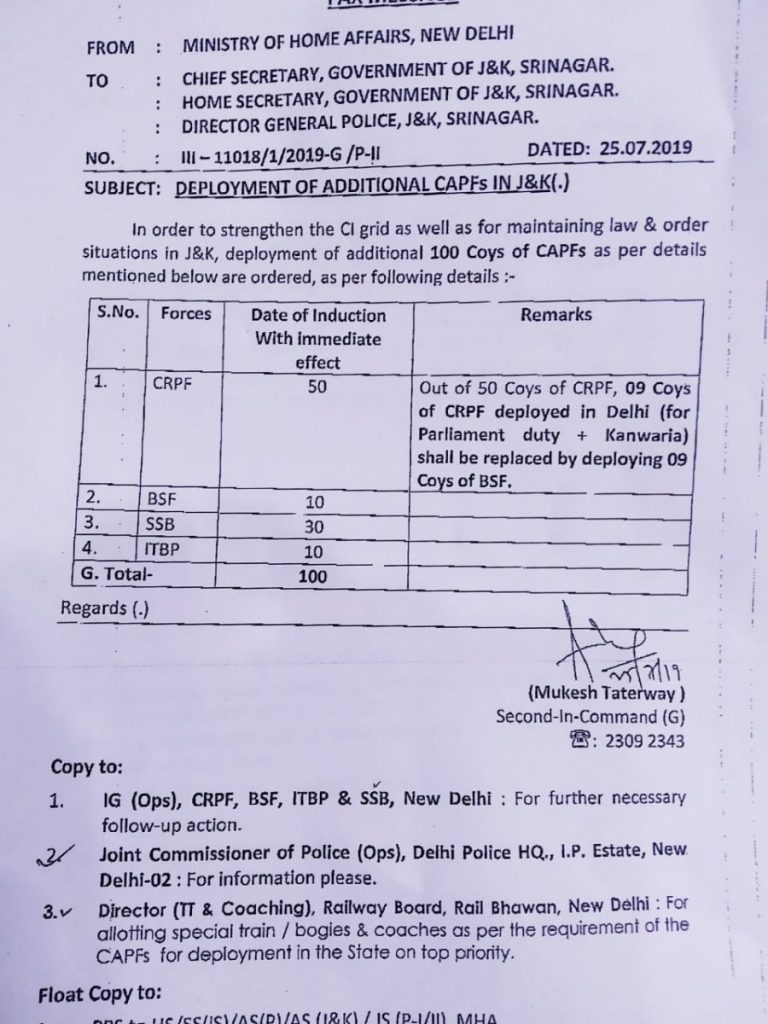 A copy of the order. Photo: The Wire

The order to build up deployment

The home ministry’s order said it has cleared deployment of 100 additional companies of the Central Armed Police Forces (CAPFs) in J&K, to strengthen the counter-insurgency (CI) grid and maintain law and order situation in the state.

The order came a day after national security advisor (NSA) Ajit Doval concluded his two-day visit to Kashmir. Officially, he didn’t chair any meeting or hold any review related to the security situation. But a senior official said the NSA was briefed about the security scenario by military top brass.

Late on Friday evening, after the MHA order, the governor’s advisor K. Vijay Kumar, who is in-charge of the state home department, and chief secretary B.V.R. Subrahmanyam held a meeting with top security and government officials, in the summer capital of Srinagar. They discussed deployment of the companies, officials said.

A senior J&K police official said they have been asked to remain “ready for handling law and order situation”. He, however, said most of the additional paramilitary companies will be deployed in north Kashmir.

The fresh deployment will be apart from around 40,000 additional Central paramilitary forces which were brought in for securing the 45-day Amarnath Yatra that commenced on July 1.

Also, the Centre had sent 200 companies of additional paramilitary troop for election duty to Kashmir last year. In December 2018, a report presented by the department-related parliamentary standing committee on home affairs in the Lok Sabha revealed that 61 battalions (26%) of the total 235 CRPF battalions, were deployed in J&K. 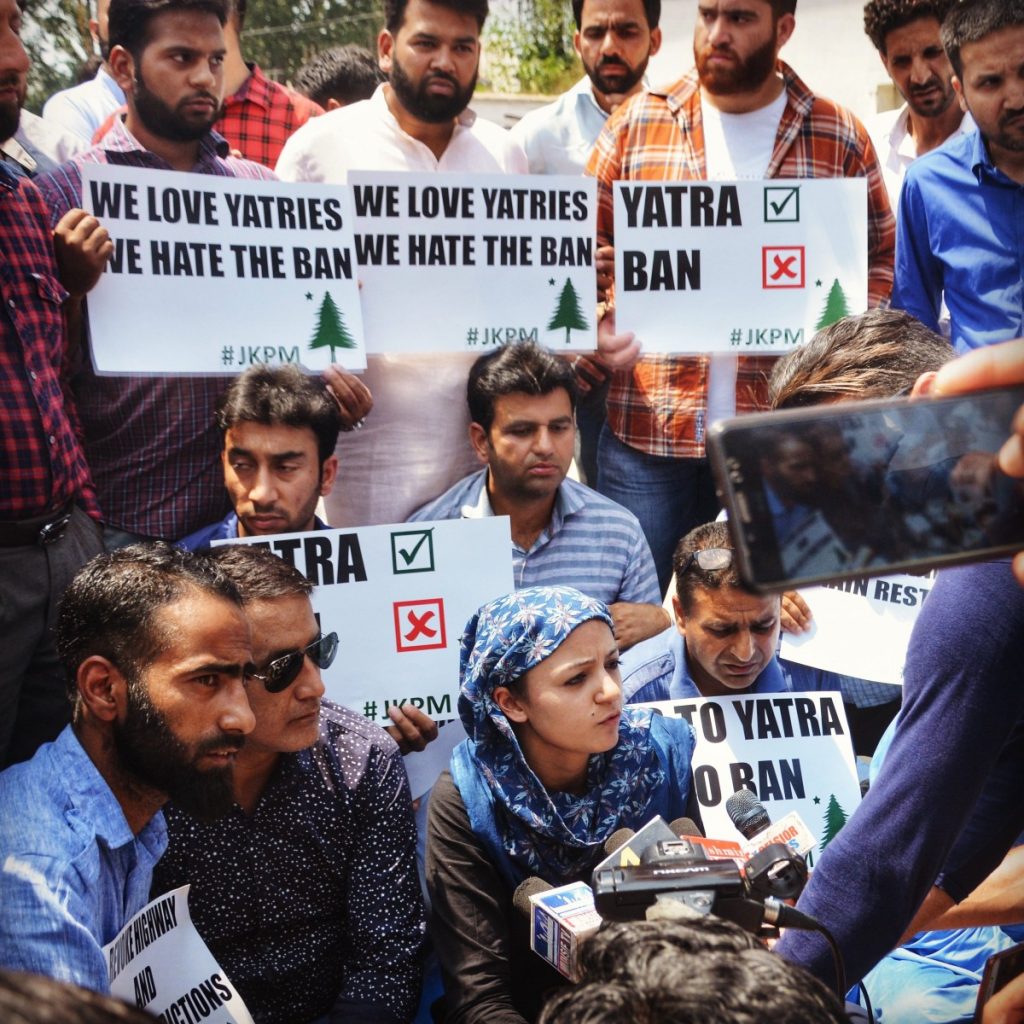 Shehla Rashid and others staging a protest-sit against the restrictions put in the wake of Amarnath Yatra at the Press Colony in Srinagar on Friday. Image: Farooq Shah

After the BJP came to powers in 2014, its senior leaders have consistently talked about abrogation of Articles 370 and 35A for “complete merger” of J&K with the Union.

While Article 370 accords special identity to J&K, Article 35A empowers the state’s legislature to define its permanent residents, granting them exclusive privileges including citizenship rights, right to property, employment and settlement.

In its election manifesto for the 2019 general election, which it won with a thumping majority, the BJP promised abrogation of both these constitutional provisions. Since then, the party leaders, both at the Centre and within the state, have again raked up the issue.

“The Centre’s decision to deploy additional 10,000 troops to the Valley has created fear psychosis among people…,” PDP president Mehbooba Mufti wrote on twitter.

“No one knows why this sudden mobilization of forces is being done. Rumor is that something sinister is about to happen. Article 35A?” he questioned.

In another tweet, he wrote that the rumors have scared many tourists away. “It is sad that Govt is not doing enough to stop the rumors. No official word so far what is happening or what might happen,” he commented.

At Srinagar airport the panic is visible.

Rumours in view of extraordinary security deployment in Kashmir have scared many tourists away.

It is sad that Govt is not doing enough to stop the rumours.

No official word so far about what’s happening or what might happen.

For the past six months, Kashmir has witnessed some extraordinary developments amid constant rumors related to some touchy subjects.

Apart from the rumors about scrapping of the articles, the talk about trifurcation of the state and delimitation of assembly seats to “dis-empower” Kashmir politically has furthered the worries of Kashmiris.

Government employee Aijaz Ahmad, who lives in uptown Chanpora, said tension is building and everybody he talks to says that they (government of India) have some “sinister design”. “It could be abrogation of Article 370 or Article 35A or something else. Who knows? The fact that the government hasn’t come forward to clear the rumors has added to concerns,” he said.

A day before the MHA issued the order, National Conference vice-president Omar Abdullah too warned the Centre against any move to abrogate the constitutional provisions.

“…undue rumors are being spread by administration that state will once again be on fire after August 15. What is it that Government of India and the state wants to achieve by bullying people? The statements emanating from Union ministers, hinting towards abrogation of Article 35A have also kept rumor mills churning,” he said addressing party workers in Srinagar.

“Whosoever goes to government offices is being warned to stock household items before 15 August. What is worrisome is that rumors are being set afloat by administration itself. The news that police stations have been told to acquire bulldozers is also keeping rumor mill churning,” Omar added, reiterating that the Articles 35A and 370 were sub-judice and the Centre should wait for the final verdict. 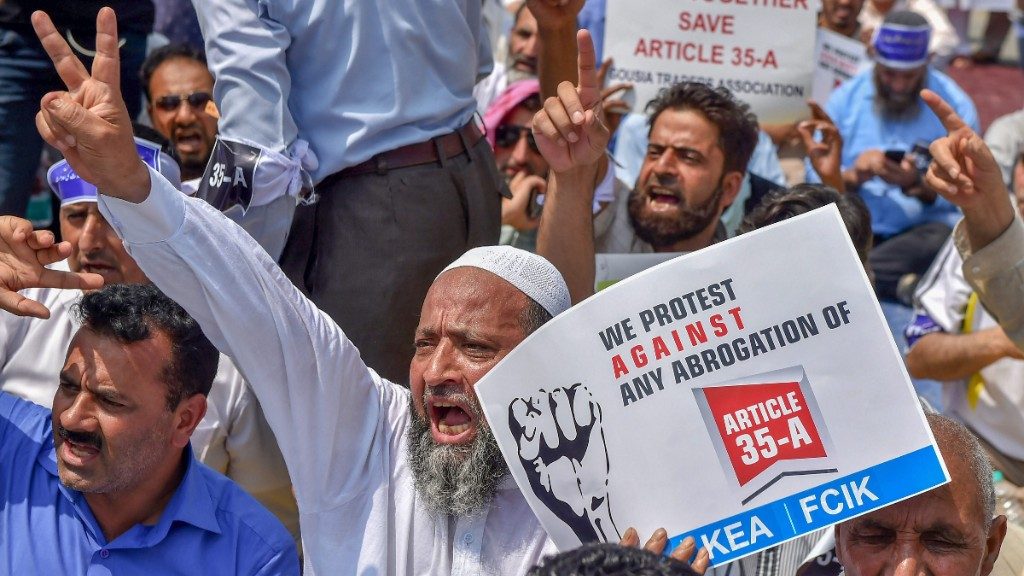 File photo of a protest against scrapping of Article 35A. Credit: PTI

The additional director general police, law and order, Muneer Khan said the rumors about abrogation of the Article 370 and Article 35A were circulating for the past three months.

“I am not aware of any such thing related to the Articles. I have no authentic thing about it to respond to. These are only rumors,” he said.

According to him, the 100 paramilitary companies being rushed to the valley will replaces an equal number of “training companies” which were sent to Kashmir for the local body elections last year.

“These were 200 training companies and they are here for 10 months. They can’t be used without MHA permission for a long time. All of them will be replaced by the permanent companies,” Khan said.

“This (move) is not related to these rumors at all,” he asserted.