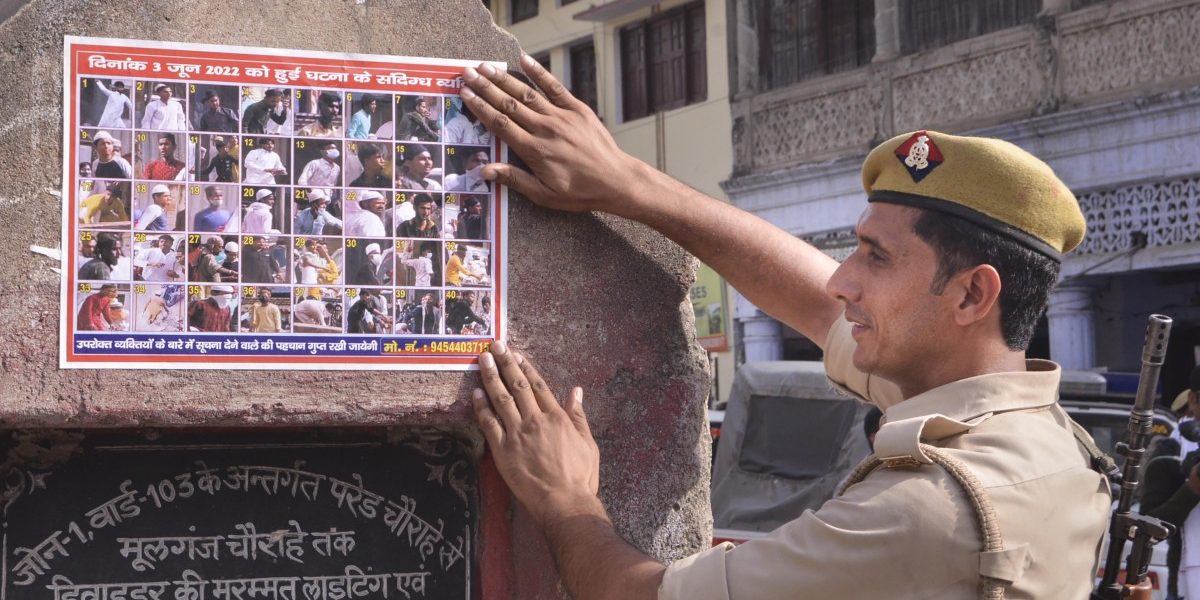 A policeman sticks a poster of those accused of communal violence in Kanpur, Monday, June 6, 2022. Photo: PTI

New Delhi: Uttar Pradesh police have arrested a local Bharatiya Janata Party leader and 12 others in connection with the Kanpur communal violence, taking the total number of arrests to 51.

All 13 have been arrested for their role in using social media during the clashes, according to a Times of India report.

Around 10 more have been detained for questioning.

A 16-year-old boy has allegedly surrendered at the Colonelganj police station after his picture appeared on posters put up by police, DCP (East) Pramod Kumar told the news agency PTI. On Monday, Kanpur police had released posters with 40 images of people allegedly involved in the violence. The images were allegedly gathered from videos of the incident, including those captured on CCTV and mobile phones.

Srivastava has since deleted the tweets, NDTV has reported.

The news agency ANI has tweeted an image of Srivastava’s Twitter account in which the cover image shows him with BJP chief J.P. Nadda.

Srivastava has been booked under sections 153A (promoting enmity) and 295A (deliberate, malicious acts intended to outrage religious feelings) of the Indian Penal Code and the Information Technology Act.

“We will act as per a zero-tolerance policy. Since Friday, we have booked 23 such social media users,” joint commissioner of police Anand Prakash Tiwari told TOI.

Violence had erupted in parts of Kanpur last Friday, June 3, during protests against now-axed BJP spokesperson Nupur Sharma’s comments against Prophet Mohammed during a TV debate.

On June 4, police had registered three FIRs against more than 1,000 unknown persons, out of which 55 people have been named as accused, all of whom are Muslims.

Police have also filed an FIR against Shams Tabrez Qasmi, editor for the multi-lingual news outlet Millat Times, for tweeting videos of the clashes.

The Kotwali police on Tuesday lodged another FIR against people behind two Facebook accounts and three Twitter handles for spreading “fake and inflammatory content” about the June 3 violence, pushing the number of such users booked so far to 13, Pramod Kumar said.

The FIR has been registered against the operators of the Twitter handles ‘Duggalsahab15’, ‘shivaisrael’ and ‘AkhandBharat’, and two Facebook account holders Abu Zaid and Kaushal Patel, the DCP said.

The district administration has sealed a petrol pump situated nearby the Deputy Padav crossing after a CCTV footage showed people taking fuel in bottles from the filling station ahead of the Friday clashes, said another senior official.

Since the sale of petrol in bottles is prohibited, the licence of the petrol pump has been suspended till further inquiry, he added.

During investigation, it has emerged that the rioters came from various districts and localities from far away.

The SIT has shifted its focus on those who could be key conspirators and behind the funding for the riots, the official added.

Besides, police have also started probing the role of Zara Hayat, the wife of Zafar Hayat Hashmi, named a key conspirator, who was arrested from Hazratganj of Lucknow on Saturday.