In the 1980s, V.P. Singh was compelled to resign as chief minister when dacoits killed six policemen and a judge. Will the present incumbent, Yogi Adityanath, follow suit is a million dollar question. 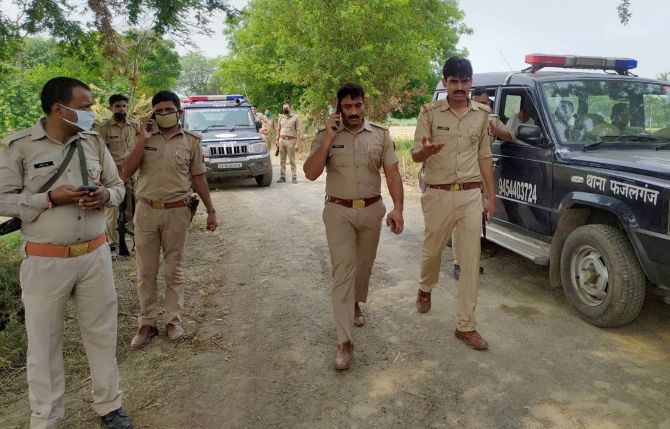 Police personnel investigate the site after an encounter between policemen and criminals ended, in Kanpur, Friday, July 3, 2020. Photo: PTI

Lucknow: Kanpur gangster Vikas Dubey had literally unleashed terror on a group of policemen before he indulged in a gory bloodbath that left four officers and four constables dead on the intervening night of Thursday and Friday.

The incident is a rude reminder of how bandits gunned down six policemen and a sitting high court judge way back in the early 1980s, cocking a snook at the much touted anti-dacoit campaign of the then chief minister, Vishwanath Pratap Singh. In the ensuing outcry, V.P. Singh was compelled to resign. Will the present UP chief minister, Yogi Adityanath, who has claimed credit for cracking down on gangsters in the state, follow suit is a million dollar question.

While the dreaded goon with more than 60 criminal cases behind him, was still at large at the time this report was filed, and the UP police was mourning the brutal killing of their men in khakhi, official sources disclosed that Dubey went to the extent of using an axe to partially sever the neck of the deputy superintendent of police who led a police party against him.

State police chief H.C. Awasthi maintained that the eight policemen who were killed had been  ambushed by Dubey’s henchmen, who fired from a neighbouring rooftop, well before the team could reach the gangster’s  mansion in Dikru village under Chaubepur police station in Kanpur (Dehat) district, about 100 km from the state capital. However, local police sources told The Wire that Dubey had already intimidated and assaulted two other police parties that were sent barely an hour earlier.

Initially, the station house officer (SHO) of Chaubeypur police station led a small team of four policemen to Dubey’s house in a bid to persuade him to return a huge amount of cash he had looted from a businessman earlier during the day. However, the gangster reportedly insulted the SHO and then also beat him inside his den.

The SHO informed his superiors, who then directed another SHO of a neighbouring police station to go to the assistance of the first group. However, the joint team also proved useless before the might of the outlaw, who compelled them to make a swift retreat. The senior superintendent of police then ordered the local circle officer, deputy superintendent of police Devendra Misra to carry out a full fledged operation against Dubey and arrest him.

Misra is stated to have gone to Dubey’s village with a large reinforcement of at least four dozen policemen. However, Dubey and his accomplices opened fire on them no sooner had the first group of policemen entered the gates of his sprawling compound. Four of them, including the DySP and three sub-inspectors instantly fell to the bullets of the gangsters, while four other constables were killed as they tried to run away in panic. The remaining policemen reportedly went helter-skelter in a bid to save their lives from the firing unleashed by the criminal gang. Several more end up getting injured.

Adityanath displayed an unusual gesture by flying down to Kanpur and paying homage to the slain policemen. He also conceded the loudly raised demand of the opposition to give Rs. 1 crore to the families of each of the deceased.

UP special task force chief Amitabh Yash said he was confident of tracking down Dubey, who is wanted in a number of criminal cases. Dubey is known for switching his loyalties from one ruling party to the other over the years. In 2001, he was accused of killing a prominent BJP leader, but currently he was known to be on very good terms with several senior BJP leaders.