Muharram processions were banned in 1989 when militancy broke out in the Valley as they would convert into anti-India protests. Only Shia-majority areas like Zadibal, Budgam, and Hasnabad see them now. 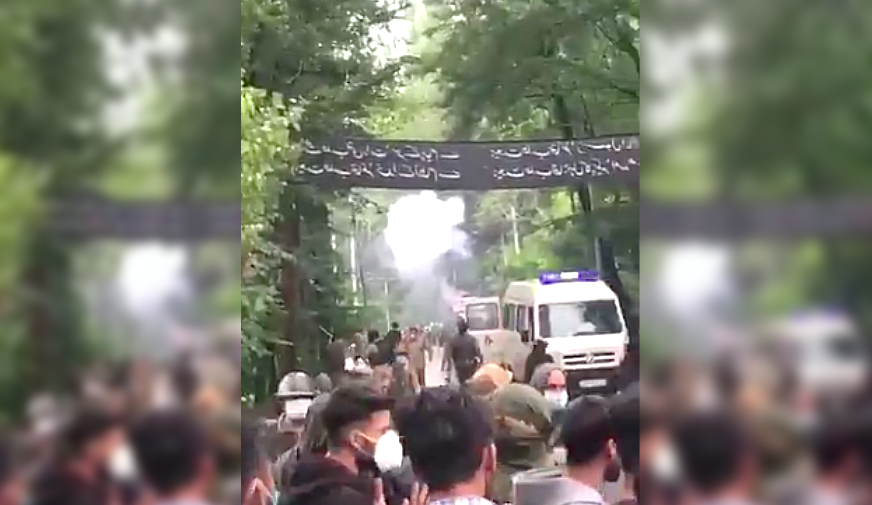 A screengrab from a video reportedly showing police teargassing a Muharram procession at Budgam. Photo: Twitter/@pzfahad

Srinagar: J&K police have arrested two people for raising pro-freedom slogans during a Muharram procession in the outskirts of the summer capital of Srinagar.

The arrests were made during a midnight raid after a video surfaced on social media on Tuesday in which the mourners were found chanting pro-‘Azadi’ slogans in Hokersar area of Qamarwari, on Srinagar-Baramulla highway, during the procession.

A police official said they acted “swiftly” to identify the location of the incident and the persons involved in raising the slogans.

“We have arrested two persons. The investigation is going on. We are analysing the video and more arrests will follow,” said the official.

A statement issued by the police said youth from adjoining areas of Budgam district led by Sajad Hussain Parray, Arif Ahmad Dar and Raja Mehboob, who were part of the Muharram procession “took advantage of the situation” and raised pro-freedom slogans.

“The area is isolated and there was no history of organizing any such unlawful gathering before, neither was there input of any gathering/procession nor was there any police presence, as the area is far from main Imambara (which is on the bund of Hokersar lake),” reads the statement.

20 mourners hurt after use of police force

Meanwhile, police have come under criticism for using force on mourners in Budgam district. Media reports said police lobbed teargas shells and resorted to aerial firing to break up a Muharram procession when hundreds of mourners were marching from Zurigund area of Budgam towards Imam Bargah in the main town.

The police personnel who were deployed in strength intercepted them. When the mourners showed resistance, the police fired teargas shells and into the air.

“The police personnel lobbed dozens of tear smoke shells and fired shots in the air to disperse the mourners. The mourners regrouped and tried to march towards the Imam Bargah,” Altaf Ahmad, an eyewitness told a local news agency.

One news report said that at least 20 mourners were injured in the police action. Though police claimed the mourners had violated COVID-19 protocol, senior National Conference leader and a prominent Shia figure, Ruhullah Mehdi lashed out at the “rogue behaviour” of police.

“The @JmuKmrPolice Budgam’s today’s behavior in Budgam is completely unacceptable did not go unnoticed (sic). I may have my own opinions about processions and SOPs related to it. But this rogue behavior in the shape of flexing muscles and firing on mourners is unacceptable,” he tweeted.

He said bullets and use of brute force is not an answer to the sentiments of Muslims. “The use of force on mourners made it clear that this police is not meant for people. It happens only when there is imperialism and dictatorship,” said the National Conference leader.

Traditionally, Shias carry out large Muharram processions at various parts of Kashmir including Srinagar. The practice was, however, banned in 1989 when militancy broke out in the Valley as these religious processions would convert into anti-India protests.

However, the processions, during which Shia Muslims observe the martyrdom of Prophet Muhammad’s grandson more 1,400 years ago, would be allowed in all Shia-majority areas including Zadibal, Budgam, and Hasnabad.

Each year, the J&K police imposes curfew-like restrictions and places iron barricades and concertina wires to block the roads leading to Shia-majority areas. To stop people from gathering, the security forces do not even allow pedestrian movement in many parts of the Valley.

However, despite the clampdown, mourners defy police restrictions each year in different areas and take out Muharram processions. These processions are often met with force including the use of tear gas shells and baton-charging of the mourners.

In December 2015, the high court again issued a notice to the J&K government directing it to file objections on a petition filed by Itihad-ul-Muslimeem, which described the ban on Muharram procession as violation of international law and interference on religious matters, asking the court to quash the ban. But the government again preferred not to file it response to the plea.