J&K: Family in Dark as NIA Arrests Photojournalist For 'Involvement in Militant Conspiracy'

Manan Gulzar Dar and his brother, Hanan, are among 13 people arrested by the NIA over suspected links with a militant conspiracy. Cameras belonging to Manan Gulzar Dar, the photojournalist who was been arrested by the NIA. Photo: Faizan Mir

Srinagar: A young freelance journalist, whose work has featured in international publications like The Guardian, has been arrested by the National Investigations Agency (NIA) in connection with a Kashmir militant conspiracy case.

Manan Gulzar Dar, 24, who has adopted the name Muhammad Manan for his professional work, was summoned to the police station in Srinagar’s Batamaloo locality on October 10.

A photojournalist by profession, one of Dar’s images from the aftermath of an encounter in Srinagar in July this year was featured in the Guardian’s ‘Twenty photographs of the week‘ section.

His father, Gulzar Ahmad Dar told The Wire that he had handed his son over to police investigators who questioned him in Srinagar for nearly a fortnight before NIA officers flew him to New Delhi.

“We got to know, through newspapers, that he had been arrested. More than a fortnight has passed but we don’t know if he is alive or dead. Police told us he has been arrested by the NIA and taken to New Delhi,” said Gulzar Ahmad, who is a retired government employee. 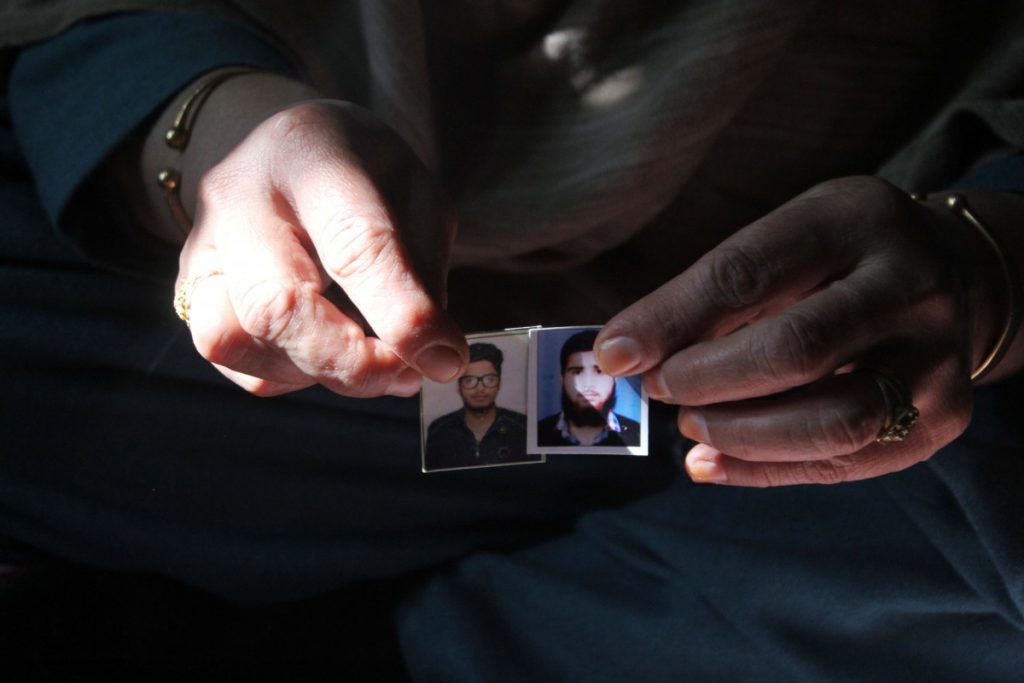 Fahmeeda Akhtar, Manan’s mother, said, “We thought it was routine questioning since many journalists are being picked up by police in Kashmir these days.”

The two brothers are among 13 suspects who have been arrested in a case filed by the agency under various sections of the Unlawful Activities (Prevention) Act (UAPA) and Indian Penal Code (IPC) after members of the minority community and migrant workers were targeted by suspected militants in Kashmir earlier this month.

A senior police officer told The Wire that Manan was part of a “conspiracy orchestrated in Pakistan” to “radicalise impressionable youths” and give them “arms training” for carrying out “terrorist acts” and “waging war against the government of India.”

“He was an ‘overground’ worker of top militant commander Abbas Sheikh. He was arrested on the basis of technical evidence,” the officer, who didn’t want to be named, said.

Among those arrested was one Sobiya Aziz, alias Mariyam-Al-Kashmiri and sister of Mugees Ahmad Mir, a Srinagar-based militant who was killed in action during the first attack by the Islamic State (IS) in Kashmir in 2017. The outfit had claimed the attack through its official news outlet, Amaq.

While most of the suspects are from Srinagar, two are from Kupwara and one is from South Kashmir’s Kulgam district.

The NIA filed the militant conspiracy case  October 10 (R0-20/2021/NIA/DLI) under IPC Sections 120 (B), 121 (A), 122 and 123 (which deal with criminal conspiracy, conspiracy to commit crime, collecting arms and concealing, with intent to facilitate, designs to wage war) and UAPA Sections 18, 18A, I8B, 20, 38 & 39 (which detail punishments for conspiracy and various punishments relating to membership to a terrorist organisation) at a police station in New Delhi.

The FIR was filed after a spate of targeted attacks within the span of 36 hours left five people, including a female Sikh school principal and three other members of the minority communities, dead. Among those killed was prominent Kashmiri Pandit chemist, Makhan Lal Bindroo.

The agency approached a court in Srinagar on Saturday seeking the five-day transit remand of eight persons, five of whom, including Manan and Sobiya, are from Srinagar. Of the others, two are from North Kashmir’s Kupwara and one is from South Kashmir’s Anantnag district. Sources said the rest of the accused have also been taken on remand.

In its documents submitted to the court which The Wire has accessed, the NIA has claimed to have received “reliable information” that the Lashkar-e-Toiba, Jaish-e-Mohammad, Hizb-Ul-Mujahideen, Al Badr, The Resistance Front, People Against Fascist Forces and other such prganisations are “conspiring, both physically and in cyberspace … to undertake violent terrorist acts in Jammu and Kashmir.”

The agency told the court that, in cahoots with their “Pakistan-based handlers” and “overground workers, surrendered militants, sympathisers, financiers, supporters and others”, the suspects were “involved in the radicalisation and recruitment of local Kashmiri youth in various terrorist outfits”.

The agency submitted that the suspects are “enhancing terrorist activities” in J&K and other places country, “including New Delhi.” During searches at the suspects’ residences, the agency claimed to have recovered “electronic devices, incriminating documents etc,” suggesting that they were in touch with “active terrorists even lodged in various jails.”

“They were also radicalising and motivating the youth of the Muslim community of J&K and insisting [that they] carry out terrorist activities in the country,” the agency told the Srinagar court which granted it their custody.

Fears of a frame-up

With the arrest of 13 persons, the NIA claims to have unearthed a Pakistani conspiracy “to carry out terror acts” in J&K as suggested by a blogpost on WordPress titled kashmirfight, which was recently taken down by the US-based self-publishing platform.

However, the family of Manan, a commerce undergraduate who has completed a diploma course in photography, is shocked by the NIA’s allegations. “We don’t know his crime. For 15 days we were made to go from one police station to another but we were not allowed to see him,” said his mother. 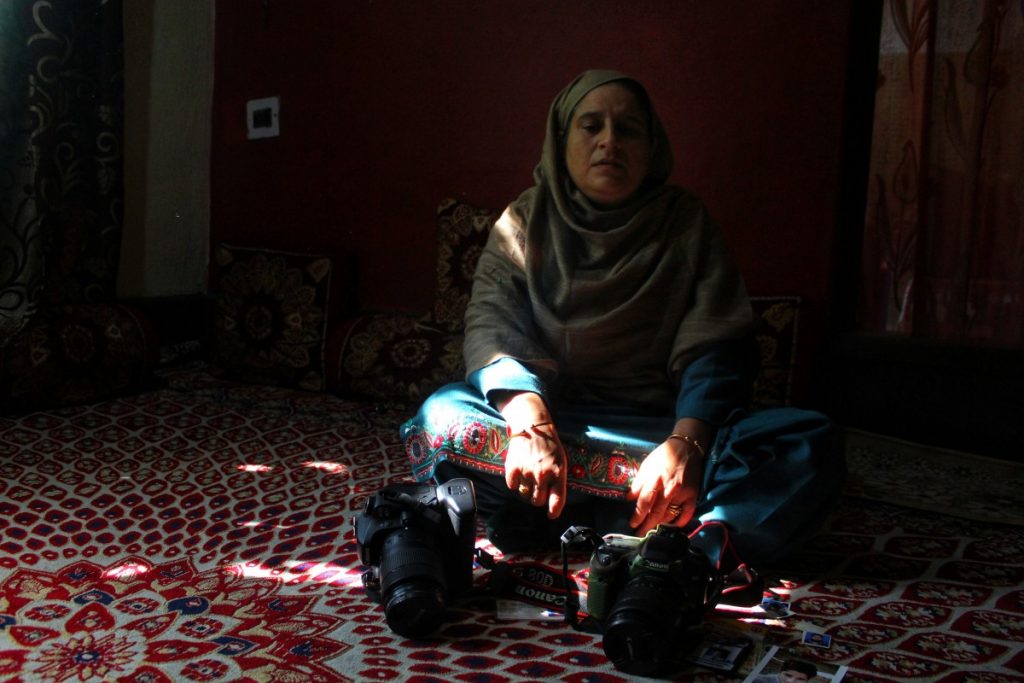 “We couldn’t even give him an extra pair of clothes,” his father Gulzar added.

While Hanan was produced before the NIA court in Delhi on Tuesday, Manan, who is presently in police custody, will be presented before the court on Saturday.

Manan’s arrest comes against the backdrop of a crackdown on independent journalists in Kashmir, three of whom have been booked under the anti-terror laws while dozens have been questioned over their professional work. In some cases, the questioning has lasted several hours.

The J&K police recently detained four journalists: Showkat Motta, Shah Abbas, Mir Hilal and Azhar Qadri, in connection with the kashmirfight blogpost case. While their gadgets, such as mobile phones and laptops, have been seized, no formal charges have been pressed against them so far.

A colleague of Manan who wished to remain anonymous said that the 24-year-old started working as a photojournalist in 2019 and picked up on the nuances of the profession very quickly.

“We recently shot a video for an international publication. Although they have not given him a byline, we worked together on the project and shared the earning,” he said, adding that his photos also featured in stock agencies such as Getty and Pacific Press. Sources said Manan has also been a student of an Islamic seminary in his locality where he was taught by Aasif Sultan, the Srinagar-based journalist who is languishing in jail since 2018 under anti-terror charges. Sultan was the 2019 recipient of the prestigious John Aubuchon Press Freedom Award.

Gulzar, however, said that he didn’t see much hope for his son in the field of journalism, “He liked photography. I always thought it (journalism) is a part-time job. He wanted to pursue higher education but our financial condition wasn’t good enough to afford a private college for him,” he said.

“I regret not selling off my land. Of what use is it now when it could have saved him from meeting this tragic fate,” he said.