The new gazette notification has been sharply criticised by leaders from National Conference and PDP, as well as the newly formed Apni Party, which is seen as close to the Centre. 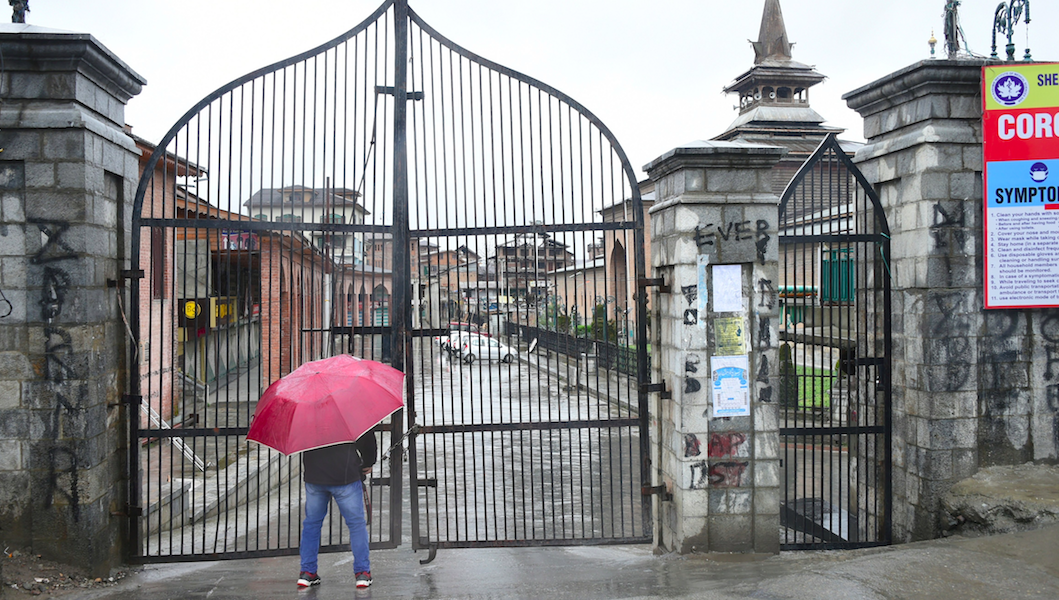 The gates of Srinagar's Jama Masjid, locked due to the countrywide coronavirus lockdown. Politicians have questioned the Centre's motive in bringing a law at such a time. Photo: PTI

Srinagar: Nearly eight months after scrapping Jammu and Kashmir’s special status, the Centre has notified a law, defining domiciles of the Union Territory, and opening up various categories of jobs in the region to people from across the country.

A person who has resided in J&K for 15 years or has studied for seven years and appeared in Class 10 or Class 12 exams in an educational institution located in J&K will be deemed to have  ‘domicile’.

In law, domicile is the status or attribution of being a lawful permanent resident in a particular jurisdiction.

Besides, children of residents of J&K who reside outside the Union Territory in connection with employment or business or for other professional or vocational reasons, but whose parents fulfil any of the conditions provided in the latest gazette notification will also be entitled to domicile status.

A person registered as a migrant by Relief and Rehabilitation Commissioner (Migrants) can also apply for domicile benefits, as per the section 3A of the J&K Reorganisation (Adaptation of State Laws) Order, 2020, issued by the Union home ministry. The order has been defined under J&K Civil Services (Decentralisation and Recruitment) Act.

The orders also empowers tehsildars to issue domicile certificates. The government has been empowered to notify any other officer as the competent authority to issue the certificate.

Level IV jobs include posts like junior assistant and constable, which are the lowest category of non-gazetted posts. Only such jobs have been exclusively reserved for people with J&K domicile status.

“Subject to the provisions of this Act, no person shall be eligible for appointment to a post carrying a pay scale of not more than Level-4 (25500) unless he is a domicile of the Union territory of Jammu and Kashmir,” reads Section 5A of the Jammu and Kashmir Civil Services (Decentralization and Recruitment) Act.

Furthermore, in Sections 6, 7 and 8 of of the J&K Civil Services Act, 2010, which deal with appointments at district, divisional and state levels, the words “permanent resident of the State” have been substituted with “Domicile of Union Territory of Jammu and Kashmir”.

The mandatory residence clause which barred inter-district appointment or inter-division appointment across Jammu and Kashmir has also been omitted.

In the erstwhile state of J&K, Article 35A of the constitution had empowered the local government to define who permanent residents of J&K were and grant exclusive rights to them when it came to jobs and owning land and property.

On August 5, the Centre read down Article 370, scrapping Article 35A, to allow people living in any part of the country to become eligible to the rights which were exclusive to J&K residents.

Following the move, several political parties of J&K had raised a demand for the protection of locals’ rights to jobs and land. The demand was, in fact, led by Bhartiya Janata Party, who government at the Centre made the August 5 legislative move.

On February 23, J&K Lieutenant Governor Girish Chandra Murmu had said the government would ensure protection of land and jobs for locals, with “certain exceptions.”

“There have been certain apprehensions among people. Keeping in view the interest of the UT, protection of land and jobs for locals would be ensured subject to certain exceptions,” Murmu had said.

Questioning the new domicile rule, former J&K chief minister Omar Abdullah called it “hollow” in terms of the protection of the rights of people of J&K.

You can imagine how hollow the domicile law is from the fact that even the new party created with Delhi’s blessings, whose leaders were lobbying in Delhi for this law, have been forced to criticise the #JKdomicilelaw

Omar was referring to J&K Apni Party chairman Altaf Bukhari who earlier this month led a party delegation to meet with Prime Minister Narendra Modi and Union home minister Amit Shah after the formation of the party.

Bukhari criticised the domicile order as  a“casual attempt, cosmetic in nature, to hoodwink people of Jammu and Kashmir” and a “casual exercise carried out at bureaucratic level without taking aspirations and expectations of people into consideration.”

While demanding the order should be put in abeyance “till the coronavirus pandemic is over,” Bukhari said the order can be challenged in the court of law.

“Being a government order and not a law made by the parliament, the new gazette notification regarding domicile rule for J&K is not immune to any judicial review. It is totally unacceptable to JKAP. In the matter of employment…a tangible legal and constitutional mechanism was supposed to be put in place to safeguard and protect these privileges of people of Jammu and Kashmir who had been the permanent residents of J&K,” Bukhari said.

He termed several provisions of the order as an “antithesis to what was promised by the prime minister and home minister on the floor of parliament while assuring a better domicile law.”

He said the order has “diluted” purpose of privileges enjoyed by erstwhile residents of J&K and provides a tunnel for non-residents of J&K to easily encroach upon the jobs which were available to people prior to October 31, 2019, when J&K Reorganization Act, 2019, which bifurcated the state into two UTs, became applicable to J&K.

The Peoples Democratic Party termed the domicile order as “frighteningly ambivalent, irresolute and akin to rubbing salt to the people’s wounds.”

“It contains no word related to the protection of land and jobs and has been issued just for the sake of issuance. We demand nothing but its immediate rollback,” said PDP general secretary, Surinder Choudhary.

He said the order has been deliberately issued at a time when the entire country, as well as J&K, was facing the dreadful threat of coronavirus and people are caged inside their homes.

“When the world is battling the coronavirus pandemic, it is deeply perturbing that some in the corridors of power are playing mind games with the perturbed people of Jammu and Kashmir who have been battling odd times since decades,” said the PDP General Secretary.

Srinagar mayor Junaid Azim Mattu also tweeted reflecting the stand of the Jammu and Kashmir People’s Conference on the law.

Doing away with district and divisional recruitment is an affront to the concept of affirmative action. We had no expectations but this particular order has made the disappointment even more intense.

The lowest rung in jobs has been reserved for locals – not even non-gazetted but Class IV jobs. There seems to be a clear intent of conveying yet another serving of humiliation and insult to the people of J&K after what transpired in August 5th.

What is ironically historical though is that in the MIDDLE of one of the worst medical disasters facing the world, the Govt of the day has the TIME and PATIENCE to script a disaster of its own. During the #COVID19 battle, the people of J&K didn’t deserve more humiliation.