For 14 Hours Today, India Will Be Locked Down

Though the 'janata curfew' is voluntary, police in many cities took steps on the enforcement of the lockdown hours. 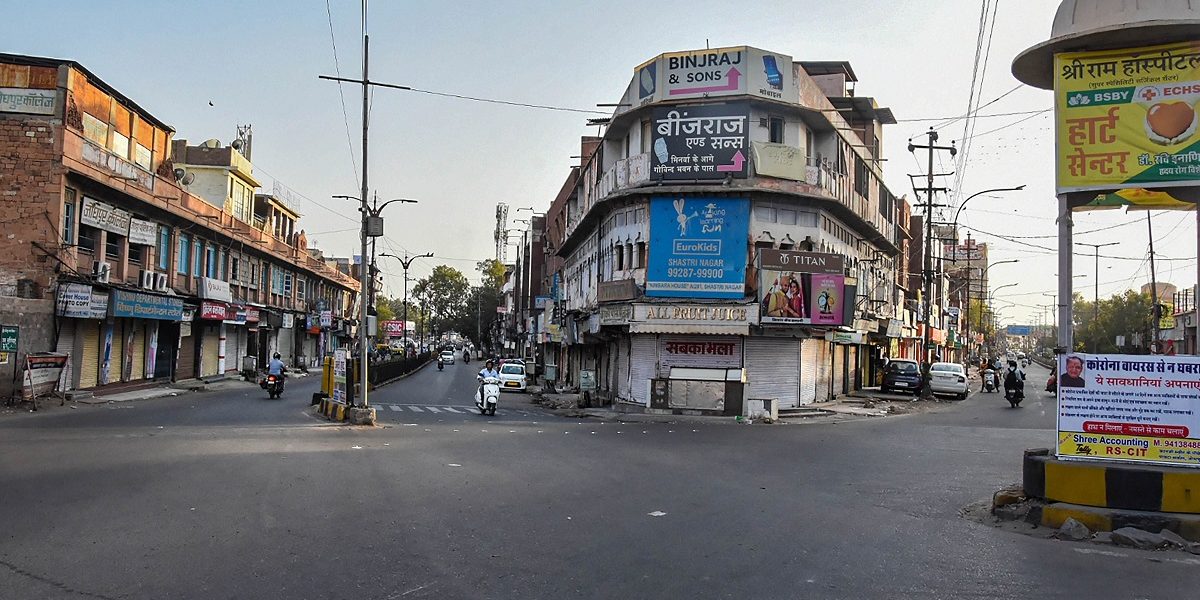 A deserted view of a market, in the wake of coronavirus pandemic, in Jodhpur, March 21, 2020. Photo: PTI

New Delhi: From 7 am on Sunday morning, India has gone into complete lockdown and will remain so until 9 pm, with movement outside home kept to the minimum, transportation services halted and markets closed down.

The latest figures for India on Saturday evening of people found positive for novel coronavirus is 315.

In a few minutes from now, the #JantaCurfew commences.

Let us all be a part of this curfew, which will add tremendous strength to the fight against COVID-19 menace. The steps we take now will help in the times to come.

Prime Minister Narendra Modi had made the call for a ‘janata curfew’ in his address to the nation on the coronavirus pandemic on Thursday. In his speech, he had urged that nobody should “leave our homes, nor get onto the streets or roam about our localities”. “Only those associated with emergency and essential services will leave their homes,” he stated.

Throughout Saturday, the Twitter account of Modi was posting a series of endorsements from industry associations about making the curfew as a ‘success’.

India is extremely proud of our IT professionals who are working hard to provide seamless services to fellow citizens. This community of innovators and industrious professionals has a major role to play in combating COVID-19. #IndiaFightsCorona https://t.co/UCooaUtbS2

The ‘curfew’ is voluntary, with Delhi Police even forced to clarify a ‘fake news’ that there were no plans to impose a fine on those found outside between 7 am and 9 pm.

However, police in various cities took steps on the enforcement of the lockdown hours. Coimbatore city police commissioner Sumit Sharan said that it was a self-imposed curfew and there were no orders for any punitive action. In Hyderabad, the city police will do “advisable enforcement” to implement the Janata curfew campaign on Sunday. The City Police had already started a campaign on social media urging the public to observe the curfew tomorrow.

“We will be persuading the public not to come out and observe the Janata Curfew. Let them stay with their families and enjoy,” said, Anjani Kumar, commissioner, Hyderabad City Police.

There are more stringent provisions in Bengaluru, where city police commissioner Bhaskar Rao suggested that intransigent people may even be booked.

The Haryana Police urged people to avoid visiting police stations or units for non-emergency grievances and instead opt for an online system for registration of such complaints.

State governments have already announced that all public transport – whether bus services or metro – will not work on Sunday. However, the Delhi government has not yet made this announcement for the capital’s bus services, while the Delhi Metro will cease all operations.

No trains will originate from any railway station from Saturday midnight until 10 pm on Sunday, as per a Railway order. However, trains that have already departed before this period will be allowed to run on the network and reach their destination. Inter-city train services in the metros will be skeletal.

Meanwhile, airlines have made different plans for the janata curfew. While GoAir stated that it will suspend all operations, Indigo and Air Vistara stated that their operations will be curtailed.

At around 5 pm, local authorities have been instructed to ring a siren to remind people to come out to their windows and balconies and give a “standing ovation” to essential service workers. “We clap our hands, beat our plates, ring our bells to boost their morale, salute their service,” Modi had said.

In most European cities which have locked down, there has been a public movement to come out to balconies at a certain designated time and applaud health workers.