The J&K Reorganisation Act, 2019, explicitly states that the LG must act only on the recommendations of the UT’s council of ministers. But the Centre has framed rules that make this impossible. 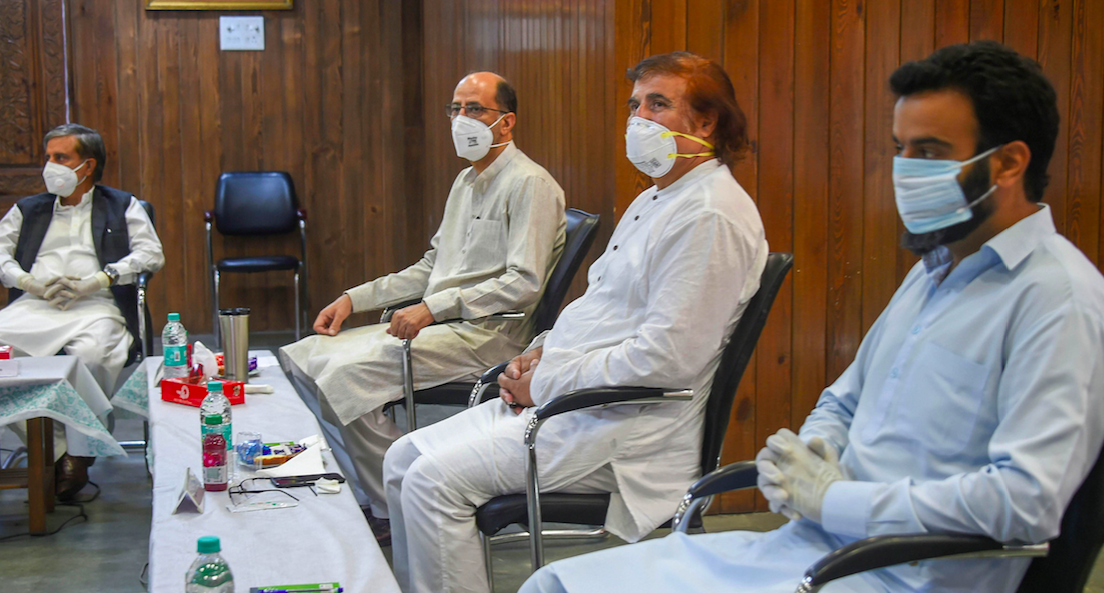 Jammu and Kashmir National Conference members attend the party's first-ever meeting after abrogation of article 370 and 35A, at the party headquarter Nawa-e-Subha, in Srinagar on August 29, 2020. Photo: PTI

Srinagar: In his recent independence day speech from the ramparts of the Red Fort in Delhi, Prime Minister Narendra Modi announced that Jammu & Kashmir will have its own chief minister and ministers after the ongoing delimitation exercise ends.

But his government has already begun undermining the role of the elected governments of the Jammu and Kashmir Union territory (J&K UT) by enacting the Transaction of Business of the Government of Union Territory of Jammu and Kashmir Rules, 2019 rather than waiting for the advice of the future council of ministers – advice that is mandatory under the Jammu & Kashmir Reorganisation Act, 2019.

At present, the Jammu and Kashmir Union territory is without an elected government and council of ministers and is under direct central rule.

On August 27, the Union Ministry of Home Affairs (MHA) unveiled the rules for transacting government business in the J&K UT as well as the mechanism to be adopted if there are differences between the lieutenant governor (LG) of the UT and the council of ministers or a minister.

“In exercise of the powers conferred by section 55 of the Jammu and Kashmir Reorganisation Act, 2019, read with the Proclamation, dated 31st October, 2019 issued under section 73 of the said Act, the President hereby makes the following rules,” reads the MHA’s notification.

But the Jammu & Kashmir Reorganisation Act of 2019 unambiguously states that the LG of J&K UT shall make the rules on the advice of the council of ministers.

Section 55 of the Act says:

(a) for the allocation of business to the Ministers; and

(b) for the more convenient transaction of business with the Ministers including the procedure to be adopted in case of a difference of opinion between the Lieutenant Governor and the Council of Ministers or a Minister.

This means that the recommendation of the council of ministers is binding when framing rules dealing with procedures of power-sharing between the LG and the elected representatives of J&K UT.

How the rules were enacted

To issue these new rules, the BJP-led central government invoked the proclamation that had been issued by the President of India on October 31, 2019, to impose President’s Rule in J&K UT.

The presidential proclamation is an instrument similar to that issued for the imposition of president’s rule in states under Article 356 of the Constitution of India, which is not applicable to Union territories.

Officials in New Delhi and the J&K administration told The Wire that to issue the new transaction rules, the Centre invoked the October 31 proclamation which vests all powers in the LG and also suspends Section 55 of the Reorganisation Act which relates to the LG acting on the advice of the council of ministers.

Can the council of ministers change the rules?

A legal expert said the Union territory’s council of ministers will be helpless to change the business rules against the wishes of the Centre or the LG.

Many senior officials in J&K UT’s administration told The Wire that they had not faced any impediments in the transaction of government business in the past 10 months since the status of the erstwhile state Jammu and Kashmir was downgraded to a Union territory.

“The business of UT administration was being conducted in accordance with the business rules of the erstwhile state of Jammu & Kashmir,” an official said.

A former bureaucrat said there was no tearing hurry to frame the rules. “I don’t think there was an urgency to enact the rules. The government should have left the framing of the UT’s business rules to the council of ministers to allow it to exercise its statutory powers. You cannot deny them something which has been committed to them under the Reorganisation Act,” he said.

He also said these rules mainly deal with the functioning of an elected government and its organs, such as the council of ministers.

“The Central government cannot justify framing these rules on the argument that the UTs of Delhi and Puducherry have similar rules. They also cannot cite the excuse that the president has framed rules for the other UTs when the Reorganisation Act clearly states that these rules should be framed on the advice of the council of ministers of J&K,” he said.

Also read: Gupkar Declaration II: Will History Repeat Itself in Jammu and Kashmir?

Thus, the transaction of government business in J&K UT was held in accordance with the business rules of the erstwhile state between October 31, 2019, and August 27, 2020.

In separate statements, the Apni Party and Panthers Party have called the new rules “autocratic” and “repulsively bizarre”.

“The new rules which provide for the allocation of powers and government business between the legislators of J&K, the LG and the Union government will almost make the elected representatives redundant by snatching the majority of the powers which are conferred upon them in a regular state,” said Panthers Party chairman and former minister Harsh Dev Singh in a statement.

The Apni Party took strong exception to the order and demanded the restoration of statehood to Jammu and Kashmir. It also demanded elections so that the making of “such undemocratic and arbitrary decisions” could be ended.

“It is highly unfortunate that we witness decisions being taken on a day-to-day basis arbitrarily and are being imposed in a highly unethical manner (sic),” the party said in a statement.

Interestingly, these rules were framed at the same time that a powerful six-party alliance in J&K rejected the constitutional changes effected by the BJP-led government on August 5 last year.