To Be a Fair Vice President, Jagdeep Dhankhar Need Only Look at Bhairon Singh Shekhawat

A nominee of the BJP, Dhankhar may be persuaded to look up to the tenure of Shekhawat who, while hailing from the same party, set a splendid record as chairman of the Rajya Sabha.

Jagdeep Dhankhar and Bhairon Singh Shekhawat. In the background is a session of the parliament. Photos: PTI and PIB

Jagdeep Dhankhar, the National Democratic Alliance (NDA) candidate for the post of vice-president of India, is all set to defeat the joint opposition candidate Margaret Alva in Saturday’s vote.

The vice-president is mandated by the constitution to act as ex officio chairperson of the Rajya Sabha. The chair presides over the house, conducts its proceedings and gives rulings on matters of disagreement and friction between the opposition and treasury benches inside the house.

In the present context, when the Modi government hopes to take up significant legislative matters in the Rajya Sabha, the role of the chairperson in dealing with such issues would be of paramount significance.

As Dhankhar’s victory is a foregone conclusion, he should be mindful of the illustrious personalities who have occupied that high constitutional office and set an exemplary benchmark of excellence while performing their duties and conducting proceedings of the Rajya Sabha with impartiality, dignity and decorum.

Also read: ‘Not the Time for Ego’: Margaret Alva Says After TMC Decides to Abstain From VP Poll

M. Venkaiah Naidu, on completing his tenure as vice-president, will be Dhankhar’s immediate predecessor. After  Shekhawat and Naidu, Dhankhar will be the third BJP candidate to be vice-president.

As chairperson of the Rajya Sabha, Dhankhar has to perform his role as per the constitution and the Rules of Procedure and Conduct of Business in the Council of States. The best way for him to do so is to remain tuned to the legacy of his distinguished predecessors.

Being a nominee of the BJP, Dhankhar may be persuaded to look up to the tenure of Shekhawat who, while hailing from the same party, set a splendid record of performance as chairman of the Rajya Sabha.

Dhankhar, being a lawyer, may find it worthwhile to appreciate and follow the oft-repeated assertion of Shekhawat who, when pressed by the treasury and opposition benches to take a decision as per their pleadings, used to say that his decision would be such that in the future, it would withstand the scrutiny of the law.

On one occasion, while presiding over the proceedings of the house, he faced arguments from both benches on a particular issue. He had said then that he would neither allow himself to be dictated by the treasury benches, nor be guided by the pressure of the opposition. As chairperson of the Rajya Sabha, he commanded respect from both sides of the house with his stature, dignified conduct and impartiality.

It was he who, in one of his speeches in the central hall of parliament, extolled the ideal of secularism enshrined in the constitution; he never hesitated to underline his secular credentials.

Opposition members protest in well of the Rajya Sabha on the first day of the monsoon session of Parliament, July 18. Photo: PTI.

He created history in the annals of the Rajya Sabha when, on his instructions, advertisements were issued by the Rajya Sabha secretariat in major newspapers asking people to submit petitions to the Rajya Sabha petition committee so that their grievances could be taken up by the upper house. In doing so, he was trying to bring people closer to parliament and make it their effective voice.

It was he who took the initiative that, instead of government departments, the Rajya Sabha and Lok Sabha secretariats would pay for the lodging and boarding expenses of MPs when they travelled outside Delhi as part of parliamentary committees to examine the implementation of the policies of the Union government.

The then speaker of the Lok Sabha, Somnath Chatterjee, also agreed with his idea and as a result, the departments of the Union government now only arrange for the accommodation of MPs during their visits; payment is made by the Lok Sabha and Rajya Sabha secretariats.

It is well known that asking questions in either house of parliament constitutes an important parliamentary device in the hands of MPs to hold the government to account. That is why question hour is called the ‘breath of the parliamentary proceedings’. It is during this hour that oral questions, known as ‘starred questions’, as well as some supplementary questions, are asked by members on the floor of the house and concerned ministers reply orally.

Starred questions are accorded priority by different government departments and replies to those questions are prepared with due diligence by officials so that ministers can use them while replying in the house.

There used to be a rule that if the MP who asked a starred question was absent, that question would not be taken up to be answered by the concerned minister.

This had a salutary impact. The supplementary questions asked by MPs made question hour more effective and contributed to securing the accountability of the executive to the legislature. Subsequently, the Lok Sabha also took note of this and reformed its question procedure in addressing absentee members’ questions.

On one occasion, when Shekhawat was presiding over the house, all questions listed for oral responses were answered during the allotted time. It set a new record in the effective management of question hour. He received compliments from both the treasury and opposition benches for that feat, which stood as a testament to his attributes as a very successful chairman.

Dhankhar should be mindful of Shekhawat’s legacy. Shekhawat too was part of the BJP and had the opportunity to serve as the chief minister of Rajasthan for three terms. In spite of his track record of discharging duties as a professional politician, he, as chairman of the Rajya Sabha, rose above party lines and demonstrated a bipartisan approach in dealing with issues.

He earned the goodwill and respect of all concerned, regardless of their party affiliations. Such bipartisanship in approach is essential for the successful functioning of any presiding officer. Can Dhankhar as vice-president of India and chairman of the Rajya Sabha, live up to that legacy?

After BJP president J.P. Nadda announced Dhankhar’s name as the party’s vice-presidential candidate, Prime Minister Modi claimed on Twitter that he has “excellent knowledge” of the constitution and is well “versed with legislative affairs.” Further, he added that Dhankhar will be “an outstanding chair of the Rajya Sabha and guide the proceedings of the house with the aim of furthering national progress.”

Not everyone would agree with this assessment. The record of his performance as governor of West Bengal is well-documented and has been commented upon by several prominent national dailies in their editorials. Chief minister Mamata Banerjee blocked governor Dhankhar’s tweets because of the friction between the two and accused him of acting like a “super paharadar (guard)” over an elected government.

In an editorial titled, ‘Mere mortals need Twitter to rant and rave. For West Bengal Governor, CM it should be the opposite’, the Indian Express wrote: “Dhankhar, who, it has to be said, is not known for a record of restraint or reticence in keeping with the constitutional office he holds, most recently called West Bengal a “gas chamber” of democracy. Neither the friction, nor the war by hyperbole between the chief minister and the governor is surprising. But this – refusal to even communicate — is a new low.”

Earlier, on July 21, 2020, the Hindu in its editorial titled, ‘On the loose: On West Bengal Governor Jaideep Dhankhar (sic)’, referred to Dhankhar’s meeting with home minister Amit Shah with a series of complaints against chief minister Banerjee by citing the oath he has taken “to preserve, protect and defend the Constitution under Article 159.”

It then observed, “Indeed, the governor has a constitutional role to perform, but Mr. Dhankhar appears enthusiastic to stretch his mandate all the time. He must remember that he is not an Opposition politician in West Bengal…. His opinions on the State government, and interactions with it, must be circumscribed by well-established precedents, and should draw strength from the Constitution he repeatedly calls to his defence.”

Restore the dignity of Rajya Sabha

Dhankhar should be well aware that during the tenure of his immediate predecessor, the controversial farm laws were passed in the Rajya Sabha by voice vote and the demands of several members for actual voting, mandated by the constitution and rules of procedure, was not accepted by chairman Naidu. The aggrieved members of the house went to the Supreme Court against the decision of the chair.

Also read: A Blow-by-Blow Account of How the Rajya Sabha Passed the Farm Bills

Because the deliberative and consultative process of law-making was dispensed with while enacting the farm laws, the country witnessed a year-long farmers’ movement against those very laws which were eventually repealed by the Modi regime.

Can Dhankhar restore the deliberative and consultative process of law making? This is the big question.

On the first day of the last winter session (November 30, 2021) some 12 members of the Rajya Sabha, belonging to different political parties, were suspended for the entire session for their alleged misconduct on the last day of the monsoon session, in August, 2021. 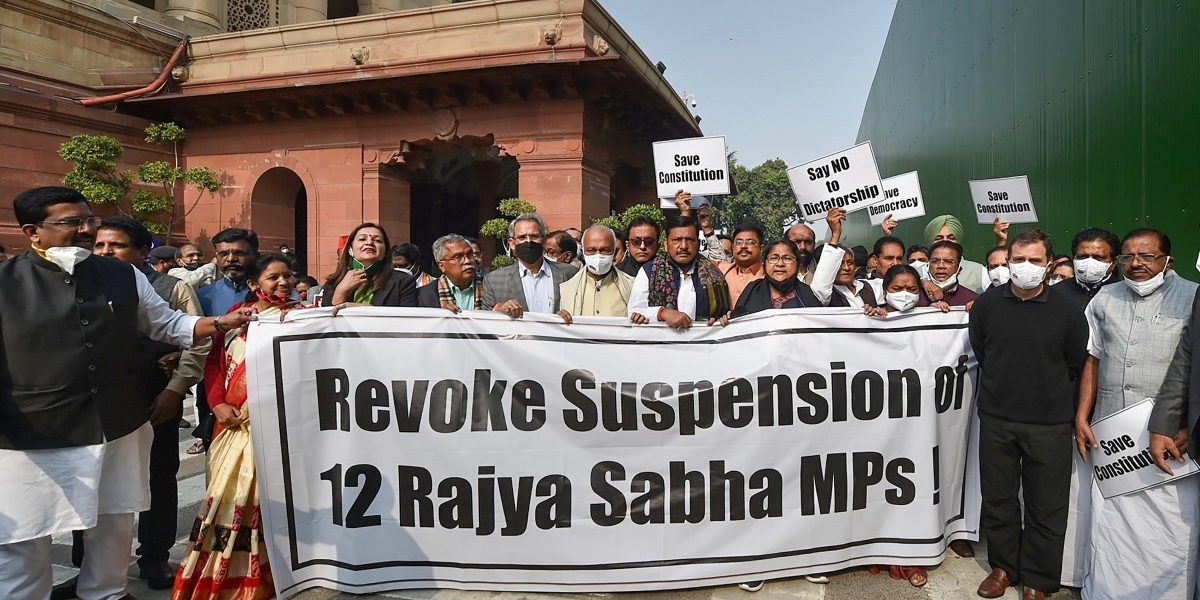 They said it was completely contrary to the rules, which do not provide for suspension from a session for what was done in the previous session. All such developments have a bearing on the dignity and prestige of the Rajya Sabha and its chair.

Now, Bills are hardly referred to the department-related Parliamentary Standing Committees for scrutiny and examination. Bills are hardly even discussed in the house and, as a result, when those Bills are passed and enacted, the legislative intent behind those Acts is completely absent.

Recently, Chief Justice of India (CJI) N.V. Ramana also expressed concern over the fact that Bills are being passed without much discussion and so, the legislative intent required to examine the constitutional validity of laws is not available for judges who adjudicate the cases challenging their validity.

These are the issues which should be topmost in the mind of the chairman of Rajya Sabha. Can Dhankhar rise to the challenge by deriving appropriate lessons from the legacy of Shekhawat, who while hailing from BJP, acted in a highly bipartisan manner and emerged as a role model Chairman?

S.N. Sahu served as Officer on Special Duty and Press Secretary to the President of India and was also Joint Secretary, Rajya Sabha Secretariat.