Since it amounts to “direct interference” in the people's religious matters, the move is “unacceptable and reprehensible”, the People’s Alliance for Gupkar Declaration spokesperson said. 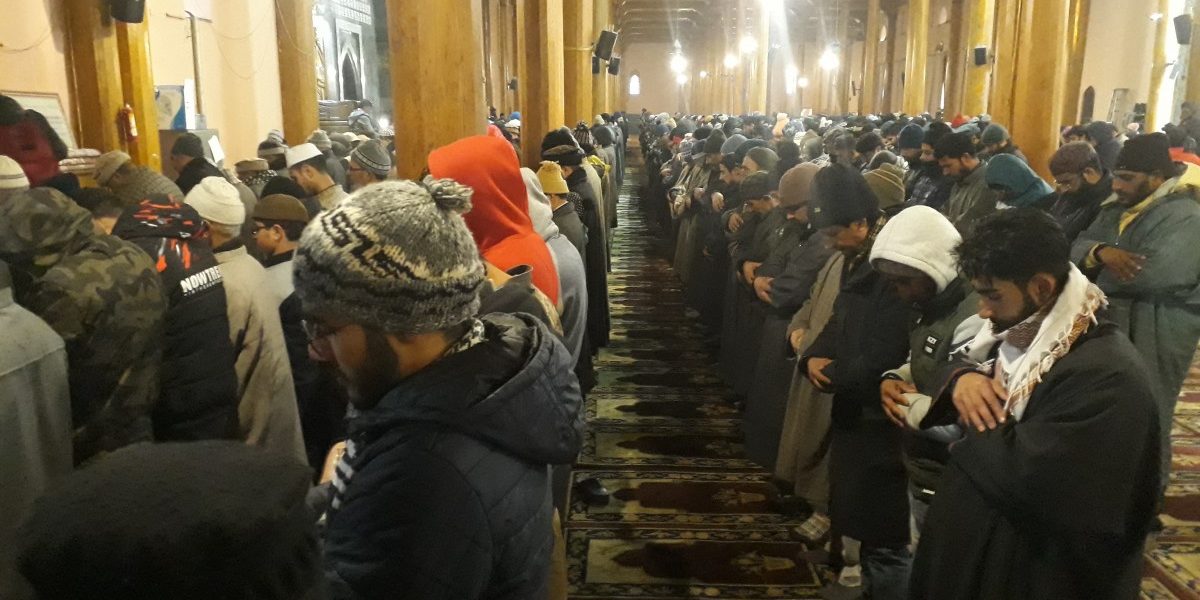 People offering Friday prayers at Jamia Masjid for first time after it was closed on August 5, 2019. Photo: Mudasir Ahmad

New Delhi: The Jammu and Kashmir administration has decided not to allow the last congregational Friday prayers of Ramzan at Srinagar’s Jamia Masjid, saying that since it’s a huge congregation, it can easily spiral into an Azadi protest.

Police sources told the Indian Express that they did not want to take any chances. “Traditionally, it is a huge congregation and it can easily spiral into an Azadi protest,” a police officer told the daily. “It would be difficult for us to manage such a huge congregation.”

The decision to not hold the congregational prayers was conveyed to the Anjuman Auqaf Jamia Masjid – the managing body of the grand mosque on April 27, Wednesday night.

“It has been conveyed that the Jumat-ul-Vida (the last Friday prayers of Ramadan) and Shab-e-Qadr (night prayers on the 27th night of Ramadan) would not be allowed at the grand mosque,” secretary of Anjuman Auqaf Jamia Masjid, Altaf Ahmad Bhat, said.

The Jumat-ul-Vida prayers are traditionally the largest congregation of the year at the grand mosque and over one lakh worshipers attend.

The move to not allow the last Ramzan prayers has been denounced by mainstream and separatist parties.

“The authorities, according to reports, have asked the managing body of the Jamia Masjid, not to offer prayers on Shab-e-Qadar and Jumat-ul-Vida, the last Friday of the holy month of Ramadan. The move will bar thousands of people from offering the congregational prayers inside the historic mosque,” alliance spokesperson M.Y. Tarigami said.

Since it amounts to “direct interference” in the people’s religious matters, the move is “unacceptable and reprehensible”, he said.

Tarigami said the PAGD urges the administration to reconsider its decision forthwith and allow the people to offer the prayers.

He said Jamia Masjid is a historic place and people have deep devotion with it.

“Such moves tantamount to hurting the religious sentiments of the people,” he said.

“Not allowing congregational prayers on the occasion of Jumat-ul-Vida at the central Jamia mosque of the valley, which is thronged by lakhs of valley’s Muslims on this blessed day – when offering prayers at Jamia Masjid has greater blessings, is outrageous, and against the fundamental human right to religious practice,” the Hurriyat said in a statement.

The separatist amalgam said the same holds true for barring people from praying at the Jamia Masjid on the occasion of Shab-e-Qadr.

“Such orders against Muslims and circulars being issued by authorities in a valley school asking the staff members not to wear hijab, in a place where Islam is the religion of the vast majority, is deeply distressing, causing great angst and hurt to people and further deepening the conflict,” the statement said, referring to an Army-run school in Baramulla district asking its staff to avoid wearing hijab during school hours.

The Hurriyat sought the revocation of the ban on prayers and to allow Muslims across the Valley access to central Jamia Masjid on the “very important and holy days of Ramadan”.

National Conference vice-president and former J&K chief minister Omar Abdullah termed the ban on congregational prayers at Jamia Masjid as unfortunate, saying the administration by its actions was proving that the situation in Kashmir was far from normal and contrary to what it has been claiming.

“That is unfortunate. They say that the situation is almost normal. If it is normal, then why no permission to Shab and Jumait-ul-Vida (prayers) in Jamia Masjid?” he told reporters in Srinagar.

He said the government was either creating “an artificial normalcy” or selling an “impression normalcy” in the rest of the country by “suppressing the people here”.

“Normalcy does not come by way of tourism only. The proof of normalcy is by having people live normal lives. Not having the prayers is evidence of an abnormal situation, and not normalcy. The government, if not by its words, then by its actions, is proving that the situation in Kashmir is far from normal,” Abdullah said.