There are a total of 4.75 lakh women competing against 42.82 lakh men to fill up a relatively small number of vacancies. 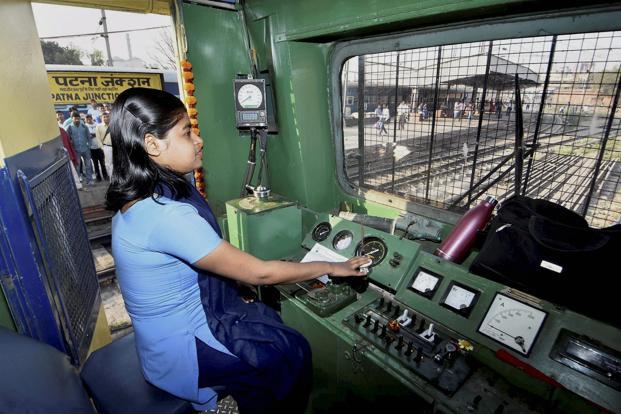 A file photo of a female locomotive pilot. Image: PTI

The job applications, senior railway ministry officials say, is a sign that women are coming forward in areas that have until now been dominated by men.

Besides this, 98 transgender persons have also applied for loco pilot and technician jobs, for which the recruitment process is in the final stage.

While 27,795 assistant loco pilots (ALP) posts and 36,576 technician jobs are up for grab, there are a total of 4.75 lakh women competing against 42.82 lakh men to fill up railway vacancies.

While there are only 1,965 female candidates from Punjab, 14,416 have come forward from Haryana, 13,944 girls are from Odisha and 19,117 from Telangana. Jharkhand is also not lagging behind, as there are 17,513 women from this state who have applied.

There are 2,393 women candidates from Delhi who have shown interest in becoming train drivers and technicians. Lakshadweep has a lone woman candidate, while four women from Mizoram, 22 from Manipur, 24 from Meghalaya and 11 from Nagaland are in the race.

The initial examination was conducted online and now the Railways is in the process of declaring results to call successful candidates to complete the procedure.

As far as the qualifications are concerned, candidates applying for the posts should have completed Matriculation/SSLC with ITI/Diploma of Engineering and should fulfil the prescribed medical standards for each post.

A train driver’s job has traditionally been seen internally in the Indian Railways as difficult because of the odd working hours.

In recent times, though, the national transporter has tried to improve the working conditions for loco pilots. Officials say that more improvements are required to facilitate better amenities for train drivers, whose work is crucial for the safety of passengers.