India Wants End to Border Tension With China but Will Not Cede Land: Rajnath Singh

The defence minister made the remarks after performing "Shastra Puja" at the Sukna-based headquarters of the Indian Army's 33 Corps in Darjeeling on the occasion of Dussehra. 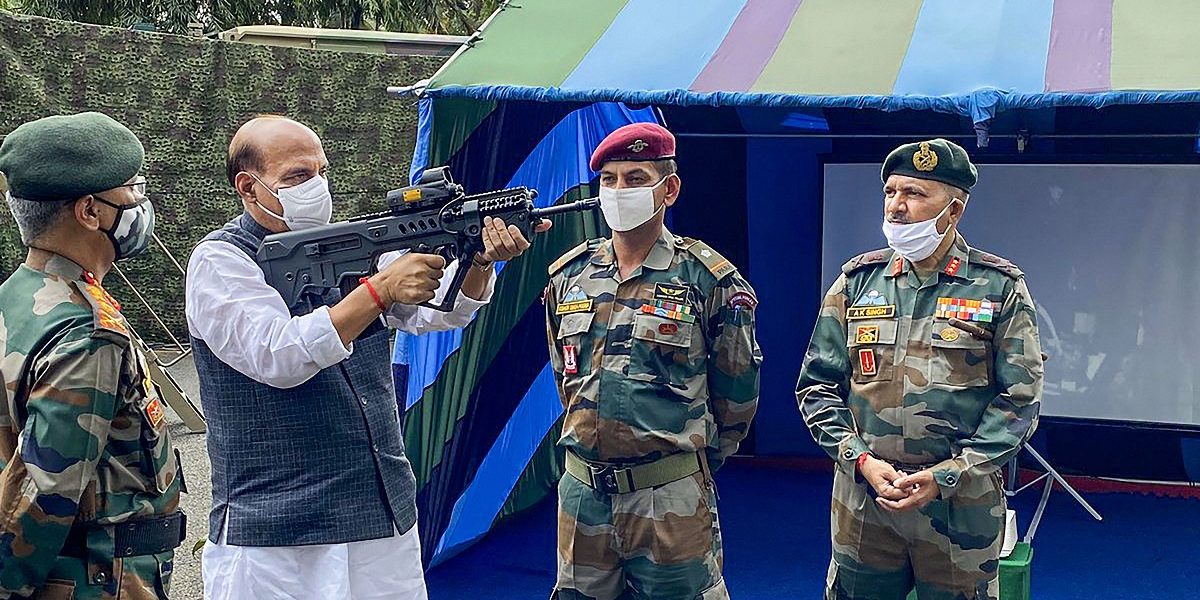 New Delhi: Defence minister Rajnath Singh on Sunday said India wants an end to the border tension with China in eastern Ladakh, but at the same time asserted that Indian soldiers will never allow even an inch of the country to be taken away by anyone.

The defence minister made the remarks after performing “Shastra Puja” – the customary worship of weapons – at the Sukna-based headquarters of the Indian Army’s 33 Corps in Darjeeling district of West Bengal on the occasion of Dussehra.

The defence minister was scheduled to perform the puja at Sherathang, a high-altitude border area near the Line of Actual Control (LAC) with China in Sikkim, but could not go there due to inclement weather, officials said.

“India wants an end to the ongoing border tension with China and restoration of peace. This is our objective. But at times, some nefarious incidents keep happening. I am very confident that our soldiers will never allow even an inch of our land to be taken away by anyone,” Singh said after performing the puja.

Chief of Army Staff General M.M. Naravane and several senior officers of the Army were present on the occasion when the defence minister performed the “puja” at the key military base, which is responsible for guarding the LAC in the Sikkim sector.

After performing the puja, Singh inaugurated a new road in Sikkim through a video-conference from Sukna.

“I can say with confidence and on the basis of concrete information that the courage and deeds of Indian soldiers during whatever has happened at the India-China border in Ladakh recently will be written in golden letters by the historians,” the minister said without elaborating. Twenty Indian soldiers died in a ‘violent clash’ with a group of Chinese troops in the Galwan Valley in eastern Ladakh on June 15, an incident that had significantly escalated the border tension between the two countries.

China is yet to disclose the number of soldiers killed on its side and injured in the clash, though it has officially admitted to have suffered casualties. According to Indian officials, China suffered “heavy casualties” in the incident.

Indian troops also occupied a number of strategic heights in the Mukhpari, Rezang La and Magar hill areas around the southern bank of the Pangong lake in eastern Ladakh, after the Chinese military attempted to intimidate them in the area on the intervening night of August 29 and 30.

Both sides held a series of diplomatic and military talks to resolve the row that began on May 5, following a violent clash in eastern Ladakh. However, no breakthrough has been achieved to end the standoff.

The defence minister’s “Shastra Puja” at the strategically important military base was a message to India’s adversaries, a military official said.

Singh has been performing “Shastra Puja” during Dussehra for the last several years, including during his tenure as the Union home minister in the previous NDA government.

Almost all formations of the Indian Army along the LAC are on a very high level of alert in view of the border row with China in eastern Ladakh.

The defence minister arrived at the Sukna-based headquarters of the 33 Corps on Saturday.

In an address to a group of soldiers at the base on Saturday evening, Singh said India always tried to maintain good relations with its neighbours, but situations arose from time to time when its armed forces had to make supreme sacrifices to protect the sovereignty and territorial integrity of the country.

The defence minister also reviewed the combat preparedness of the Army during a high-level meeting at the military base.

The Army has significantly bolstered deployment of troops and weaponry along the nearly 3,500-km-long LAC, including in the Sikkim and Arunachal Pradesh sectors.