CMD of Hindustan Syringes & Medical Devices Rajiv Nath in conversation with Karan Thapar for The Wire. 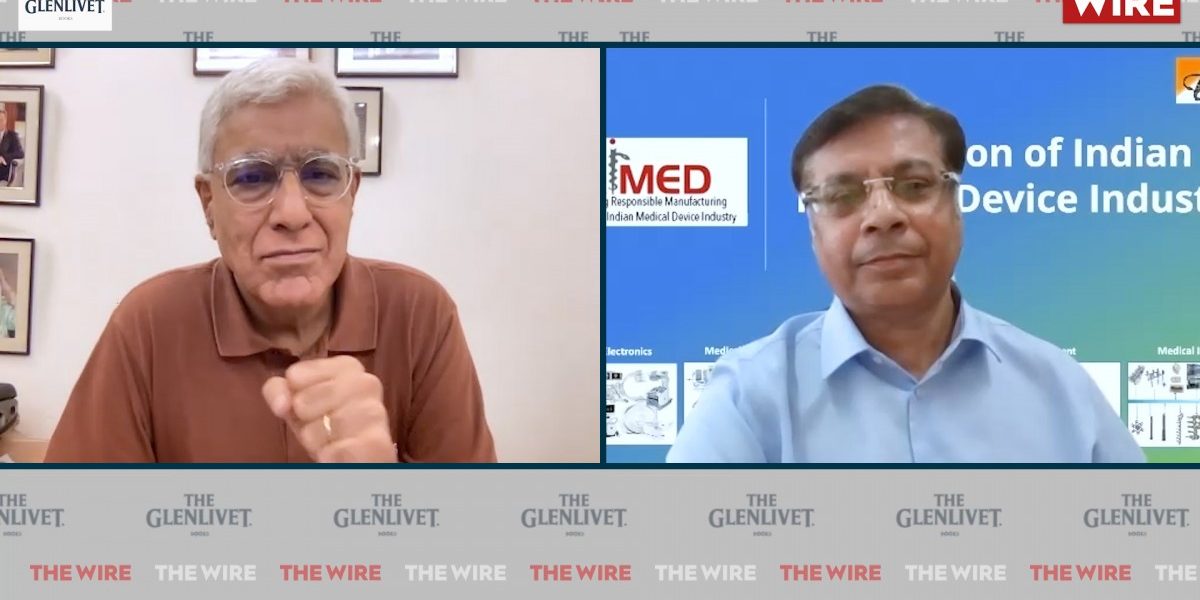 In a distressing interview to The Wire, the chairman and managing director of Hindustan Syringes & Medical Devices (HMD), India’s largest maker of medical syringes, said the country faces a shortage of auto-disable syringes – to be used and thrown away – for vaccines.

Rajiv Nath squarely blamed the Indian government for this situation when he said it had failed to order a sufficient number of syringes in advance. This is despite the fact that the Association of Indian Medical Device Industry (AiMeD), where Nath is forum coordinator, has been urging the government to estimate long-term demand and place orders since April 2020.

As a result, Nath said, India’s demand for COVID-19 vaccines has outpaced the availability of syringes as much as of vaccine doses themselves. Would we be right to interpret this failure on the government’s part as ‘irresponsible’. “Very much so,” Nath said. “It could have been handled better. This crisis wasn’t necessary.”

In a 28-minute conversation with Karan Thapar, Nath shared some astonishing details about the government’s subpar response to industry when asked how many syringes it will need. He said that his company and others in the industry haven’t received clear answers from the government since April last year.

According to him, industry leaders have repeatedly sought a tripartite meeting between vaccine manufacturers, syringe manufacturers and the government, but this never came to be.

As recently as September 14, Nath said he wrote to Union health secretary Rajesh Bhushan asking about the country’s estimated syringe need up to March 2023. Three weeks later, Bhushan has yet to respond. 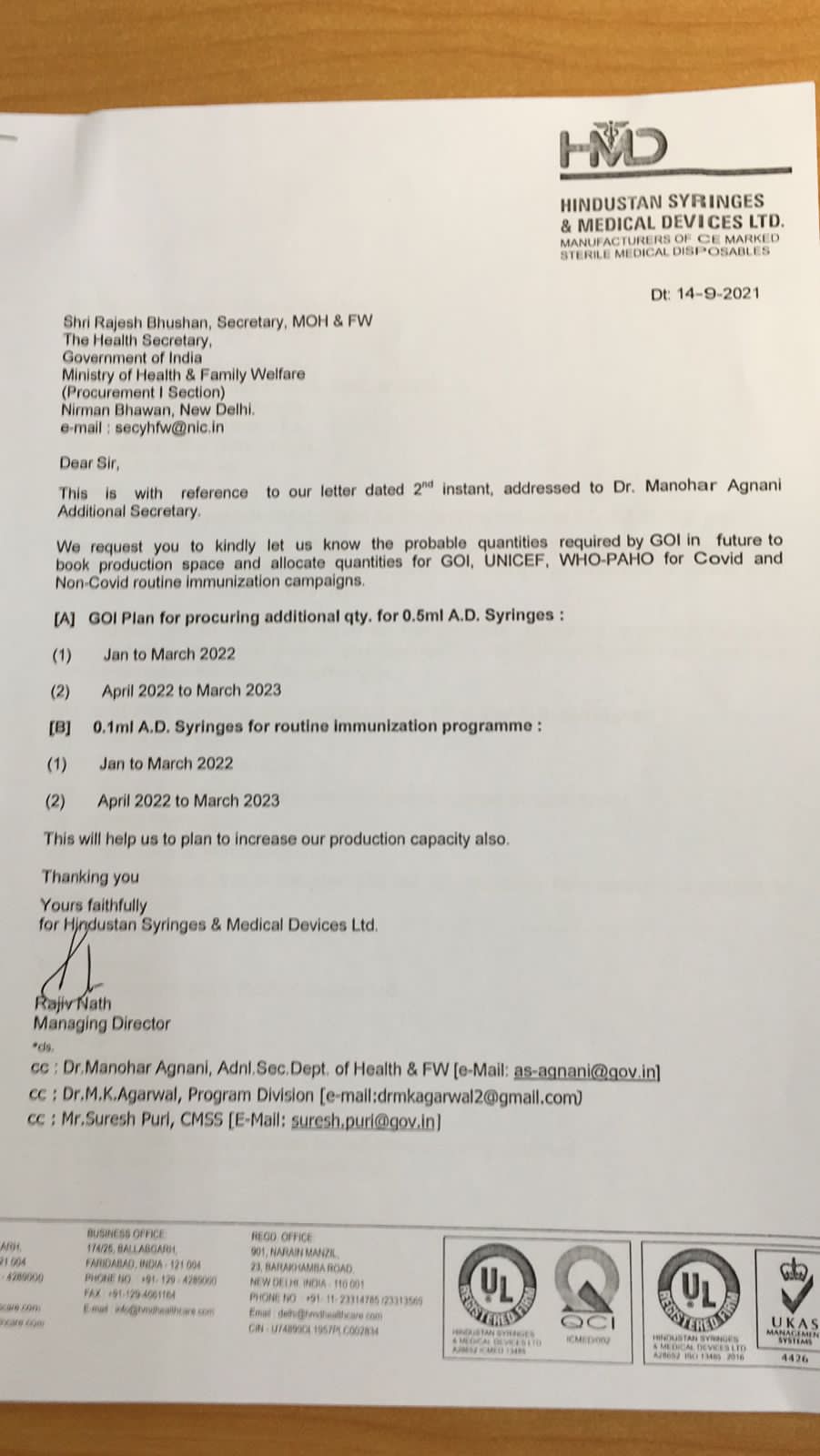 Ironically, according to Nath, it wouldn’t be hard for the government to compute this estimate – yet it has thus far placed an order with his company, HMD, for only 75 million syringes for 2022. The government will obviously need several multiples of that figure, and 2022 is only 10 or so weeks away.

As a result, Nath said he as well as other syringe-makers would go through newspaper reports to learn about the number of vaccines the government was ordering and determine how many syringes they’d have to produce. The government never directly contacted and informed them.

Even today, India is producing more vaccine doses than there are syringes for, Nath said.

On October 6, Business Standard reported that while Serum Institute plans to produce 200 million doses of Covishield a month from October 2021, Nath’s company can produce only 90 million auto-disposable syringes a month. The same report added, “India needs around 300 million syringes to inoculate its children annually. But it needs close to that number every month for the COVID-19 vaccination drive.”

The problems don’t end there. In an attempt to minimise the consequences of its oversight, the Indian government has started forcing manufacturers, including Nath’s HMD, to stop producing syringes for export or for the WHO and UNICEF and divert them to the domestic market. As a result, UNICEF has already “rapped [HMD] on the knuckles,” Nath said. As of October 4, the government had also placed direct curbs on syringe exports.

Nath had said last year that India’s syringe-making industry exported 120 million units on average every month. In early 2021, this figure breached 130 million. Now, however, according to a government-issued trade notice, only 40 million syringes can be exported in October, and 40 million more in November. The figures for December and January are 90 million each. The government has applied this restriction with a view to procuring 80 million doses each in October and November, Nath added – which may still not suffice.

HMD alone has exported 50 million syringes a month on average. The government’s 40-million cap will mean that it won’t be able to honour its commitments and, therefore, run the risk of annoying its international customers and perhaps lose its hard-earned market share as well.

Worse yet, the government’s curbs are so nonspecific that they also restrict the export of syringes that are not required for COVID-19 vaccination in India. For example, the Pfizer-BioNTech vaccine requires a 0.3-ml syringe that HMD makes – but which it can’t export even though the demand for it in foreign markets is higher. (The spec for Covaxin and Covishield syringes is 0.5 ml auto-disposable.)

In an October 5 letter to India’s Director General of Foreign Trade, Nath – as president of the All India Syringes and Needles Manufacturers’ Association – and general-secretary Vimal Khemka wrote:

The supply chain management is currently challenged temporarily due to peak seasonal spike in demand of standard disposable syringes for [the seasonal diseases] dengue and typhoid, etc. This will definitely ease by mid-November but as of now it’s important to focus on non-COVID care as first priority and then second priority should be vaccination preventive care but the exports sudden restrictions are disruptive as it will create problems for the Indian syringe manufacturers and we are getting calls from members how to handle cargo left [in] our factory and under custom clearance at ICD and airports. There will be huge demurrage and upset customers. (sic)

On October 6, Nath wrote as the forum coordinator of AiMeD to Union commerce minister Piyush Goyal asking that the restrictions exclude syringes that India doesn’t need so much of (including those for delivering insulin and for the Pfizer-BioNTech COVID-19 vaccine) and to allow companies to export “at least 50% of the quantity shipped to a country last year in October-January period of 0.5 ml, 1 ml, 2 ml and 3 ml syringes”.

Business Standard also quoted Narendra Jain, president and CEO of Iscon Surgicals, saying that the Centre has scrambled to open up tenders for syringes to include makers of the more voluminous 1-ml needles.

Finally, Nath said the government has ignored the syringe industry’s repeated pleas to extend its scheme for production-linked incentives to small manufacturers that make PPE and other COVID-related equipment.

This article is a paraphrased precis of Rajiv Nath’s interview to Karan Thapar for The Wire. There’s a lot more in the interview than has been covered here. Please watch it in full below.