The defence minister, addressing the Shaurya Diwas function in Srinagar to mark India's first military victory after independence, also said that Pakistan is "committing atrocities" against people in PoK. 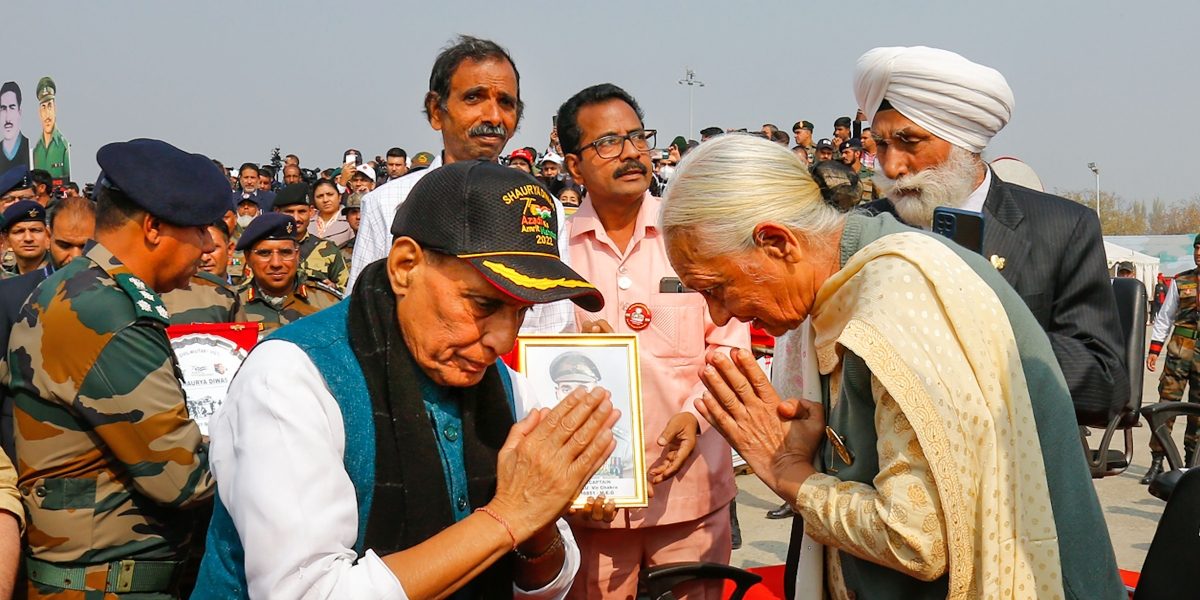 Srinagar: India’s northward journey of development will be complete after reaching Gilgit and Baltistan, parts of Pakistan-occupied Kashmir, defence minister Rajnath Singh said on Thursday while referring to the 1994 resolution passed in the Parliament on getting back the territories “under illegal occupation” of the neighbouring country.

Singh, who was addressing the Shaurya Diwas function here to mark India’s first military victory after independence, also said that Pakistan is “committing atrocities” against people in its occupied Kashmir and will have to bear its consequences.

Asserting that discrimination against the people of Jammu and Kashmir ended under the leadership and guidance of Prime Minister Narendra Modi as Article 370 was diluted, he said, “this brought a new dawn of hopes in the region.”

“Kashmir and Ladakh today are on an accelerated path of development. This region is touching new heights of development…We have only started our northward journey. Our journey will be complete when we fully implement the unanimous resolution passed by the Parliament on February 22, 1994 and we reach our remaining areas like Gilgit and Baltistan,” Singh said.

Prime Minister Modi also, in a rare departure from precedence, in his independence day speech in 2016 brought up the situation in Pakistan-occupied territories, and said the people of Balochistan and Gilgit thanked him for raising their issues.

Singh said Jan Sangh founder Syama Prasad Mookherjee had started a mahayajna for full integration of Jammu and Kashmir which was completed on August 5, 2019.

Referring to the atrocities committed by Pakistan against the people in PoK, the defence minister said the neighbouring country will have to “bear its consequences”.

“I would like to ask Pakistan about the rights given to the people living in our areas where it has maintained illegal occupation… We keep on hearing about the inhuman acts committed against innocent Indians for which Pakistan is fully responsible. And here I am talking about Pakistan-occupied Kashmir,” he added.

Accusing Pakistan of “shedding crocodile tears” in the name of human rights, Singh said, “the pain of the people of Pakistan-occupied-Kashmir also troubles us and not just them.”

“The tandav of terrorism that J&K has seen in the name of Kashmiriyat cannot be described,” he said while asserting that terrorism has no religion and the only aim of terrorists is to target India.

He claimed that in the last few years “some so-called intellectuals have cried human rights violations when actions were taken against terrorists”.

The Army hosted ‘Shaurya Diwas’ at the old airfield of Srinagar (Budgam airfield) to mark the 75th anniversary of the arrival of the 1 Sikh Regiment in 1947 to protect Jammu and Kashmir from Pakistani forces.

It was the first military operation of Independent India, a move that changed the course of the 1947-48 War.

The first of the Indian Army soldiers dispatched for the mission had landed at the airfield on October 27, 1947, to repulse Pakistani forces.

Usha Parmar, the octogenarian daughter of Brigadier Rajinder Singh and family members of other martyrs also attended the event.