While the Modi government has taken steps to curb politicised transfers, it has dithered on other important reforms, says a Carnegie study. 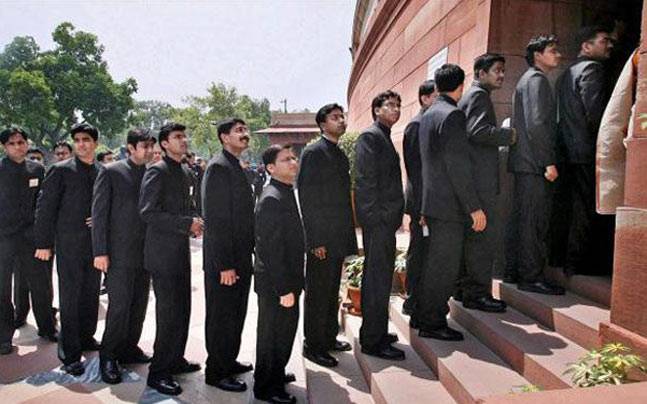 New Delhi: At a time when India stands out as a relatively bright spot in a global economy marked by slumping growth rates and extreme volatility, there is simultaneously a lingering view that corruption and politicisation of the civil services have become more entrenched, a research paper by Carnegie Endowment for International Peace on India’s elite civil service cadre, the Indian Administrative Service (IAS), has noted while calling for urgent reforms.

The paper, titled “The Indian Administrative Service Meets Big Data”, by Milan Vaishnav, senior associate South Asia Program at Carnegie, and Saksham Khosla, research analyst at Carnegie India, delves in detail into how “the IAS is hamstrung by political interference, outdated personnel procedures, and a mixed record on policy implementation”. It also suggests that immediate reforms should be brought about by the government to “reshape recruitment and promotion processes, improve performance-based assessment of individual officers, and adopt safeguards that promote accountability while protecting bureaucrats from political meddling.”

The paper also looks into how the IAS has also been facing a number of serious challenges from diminishing human capital to political interference that, if left unaddressed, will lead to further institutional decline.

Stating that resistance to change is perhaps why many experts have suggested keeping the IAS intact but introducing a series of updates to its recruitment and overall operations, the paper said many of these alterations can be found, in some form or fashion, in the various reports of the Second Administrative Reforms Commission (SARC), a major government-led initiative launched in 2005 to prepare a blueprint for overhauling the Indian bureaucracy.

Recognising that “inefficiency, corruption and delays have become, in public perception, the hallmarks of public administration in India,” the commission had released 15 reports on various facets of governance, including undue political interference, inadequate accountability mechanisms, and capacity building.

Regarding recruitment, it said the commission had recommended significantly lowering the permissible age of entry into the civil services and establishing national institutes of public administration that would cultivate a new pool of aspiring civil service applicants. In an attempt to engineer a shift away from seniority-based career progression, the commission also suggested that all promotions be based on successful completion of mandatory training.

Finally, to strengthen accountability mechanisms, the commission recommended a system of two intensive reviews at the 14 and 20 year marks to determine continuance in public service, as well as a new civil service reform bill to fix a minimum tenure for senior posts and establish safeguards against arbitrary dismissal.

But, it said, the obstacles to even modest reform of this type — such as opening up senior management positions in the IAS to individuals from the private sector — were immense.

In the paper, Vaishnav and Khosla have also taken a close look at the performance of the Narendra Modi government on various counts pertaining to administrative reforms.

After initially raising hopes that it would resist opposition to infusing public service with more lateral entrants, the Modi administration too apparently relented. “In December 2015, Minister of State for Personnel, Public Grievances, and Pensions Jitendra Singh clarified that the present government has no plans to pursue lateral entry into the IAS.”

“Since coming to power in May 2014, the Modi government has taken steps to curb politicised transfers, although its moves have received mixed reviews. Some commentators have praised the new process instituted by the Prime Minister’s Office (PMO), whereby senior bureaucrats run background checks on all officers seeking postings to the central government with two criteria in mind: honesty and efficiency. Critics, however, argue that centralising power in the PMO does not bode well for an effective administrative machinery and point to frequent reshuffles at the joint-secretary level and falling numbers of officers willing to work at the centre as evidence of this weakness,” the paper said, looking at the issue from both perspectives.

The paper also mentioned that the Second Administrative Reforms Commission had also favoured opening up additional secretary (one rank above joint secretary) positions to qualified individuals from the private sector. “The Modi government has taken a welcome step in this direction by restructuring the empanelment process. Previously, an expert committee would aggregate an officer’s annual personal appraisal reports (where outstanding grades were typical) for the preceding sixteen years — a system predicated on negative disqualification, or searching for reasons to drop candidates, rather than on considered selection based on affirmative criteria.”

But now, by introducing a comprehensive evaluation that ranks officers on their functional skills, domain expertise, behavioural competence, and integrity, the Centre has sought to eliminate ambiguity from the empanelment process and explicitly tie high job performance to moving up the career ladder.

Finally on the issue of reducing the age of entry into IAS, the paper said, “given that older officers entering the bureaucracy are perceived as less effective by internal and external stakeholders like civil society members, business people, politicians, and other civil servants, reducing the maximum age of entry into the IAS is a relatively easy reform the government could introduce.”

However, it noted that while the SARC had recommended limiting the permissible age, the Department of Personnel and Training had moved in the opposite direction, and increasing the age limit for aspiring candidates in 2014. “The agency made the switch despite the fact that two-thirds of all civil servants the government surveyed agreed that the maximum age of entry should be decreased.”

But the Modi government, the paper said, has now changed this course. “Of late, however, both the government and the bureaucracy seem to have reached a consensus on the importance of lowering the upper-age limit. According to media reports, the Modi administration is likely to accept the recommendation of an August 2016 UPSC panel report to implement a phased reduction in the age limit for general, able-bodied candidates from 32 to 27 years. This small step not only improves the IAS’s human capital pipeline but also paves the way for organisational reform in the future.”

As for the “final pesky issue of what to do with perennially underperforming officers”, the paper said, the SARC had recommended that within the framework of a new civil services law, the government institute a new policy whereby all officers who are deemed unfit for service at the time of their 25-year review be forcibly retired.

“Neither the Singh government nor the Modi administration embraced this suggestion, but the latter has taken new steps to crack down on poor performers. According to media reports, the Department of Personnel and Training has begun systematically reviewing the performance of central officers who have either completed thirty years of service or reached fifty years of age. Those officers who receive negative reviews, the reports suggest, are to receive a notice that their services will be terminated within three months,” the paper revealed. It said at end of 2015, the Modi government disclosed that it had dismissed or compulsorily retired 13 bureaucrats for unsatisfactory performance. “This process of dismissing officers who are negatively rated at predictable career benchmarks should be institutionalized so that it does not rest on the preferences of any one government but becomes a transparently enforced and embedded rule,” the paper urged.

The paper has pointed out that as per global standards also, the IAS has not been faring well and in fact, its performance is seen to be one the decline. “According to a measure of government effectiveness developed by the World Bank that captures the quality of a country’s civil service, its independence from political pressure, and the quality of policy formulation and implementation, India’s performance is middling. Data from 2014 place India in the forty-fifth percentile globally, nearly a 10 percentage point decline from the country’s position in 1996, when these data were first collected.”

The study also gave some key insights into the IAS, especially how officials pursue their careers. It said for officers early in their careers, exam scores and education are highly predictive of future success. As for older officers, who enter the service as part of larger cadres, they face limited career prospects and are less effective at improving economic outcomes.

Similarly, it observed that while initial characteristics heavily shape career trajectories, in the long term, there are clear rewards for officers who systematically invest in training or acquire specialized skills. “Individual bureaucrats can have strong, direct, and measurable impacts on tangible health, education, and poverty outcomes.”

The study also revealed that commonly held notions sometimes do not work when it comes to assessing civil servants. “Surprisingly, officers with strong local ties thought to be vulnerable to corruption — are often linked to improved public service delivery, it said.

Cautioning against political interference, as it generates substantial inefficiency, it said the best officers do not always occupy important positions, while political loyalty offers bureaucrats an alternative path to career success.

The paper also came out with a host of suggestions on how the reform agenda could be implemented, stating that the central and state governments should pass and implement pending legislations that protects bureaucrats against politically motivated transfers and postings. “Despite judicial prodding, most states have stalled on such moves,” it lamented.

On how, the services of the cadre could be optimally utilised, the paper suggested that the IAS should use data on civil servants’ abilities, education, and training when placing officers early in their careers. As officers gain experience, performance metrics can inform key decisions about promotion and allocation.

The government, it said, should consider the proposal that officers deemed unfit for further service at certain career benchmarks be compulsorily retired through a transparent and uniform system of performance review. While the present government has moved in this direction, this procedure should be institutionalised, it demanded.

It said those who have come into contact with the country’s bureaucracy have long criticized it for being cumbersome, slow, inefficient, and often venal. “The Indian administrative apparatus has not fared well in terms of popular perception,” it said, adding that this view has over the years become more entrenched.