While the cost of hospitalisation has gone up more than 10% between 2004 and 2014, the Rashtriya Swasthya Bima Yojana’s insurance coverage has remained unchanged. 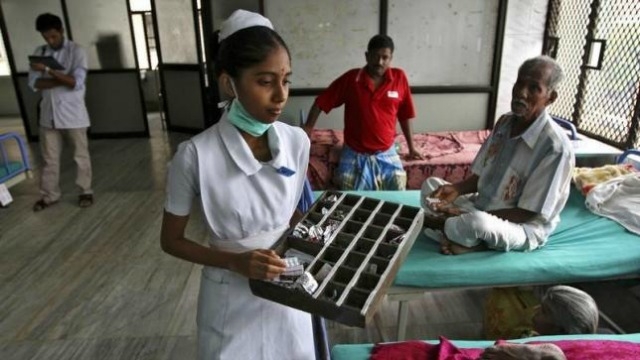 India’s health-related out-of-pocket expenditure, which pushes families into indebtedness and deeper poverty, is among the world’s highest. Credit: Reuters

India’s nine-year-old government health insurance programme, the world’s largest, has not eased the burden of healthcare costs borne by its poorest families, a new study has found.

The Rashtriya Swasthya Bima Yojana (RSBY) offers medical insurance up to Rs 30,000 for a family of five living below the poverty line (BPL) – defined as the ability to spend Rs 33 per day in urban India and Rs 27 per day in rural. It is, however, limited to inpatient treatment or hospitalisation.

The programme has not led to any reduction in out-of-pocket expenditure – personal spending – by its 150 million beneficiaries, according to a 2017 study published in Social Science Medicine, a global journal.

India’s health-related out-of-pocket expenditure, which pushes families into indebtedness and deeper poverty, is among the world’s highest. In a low-middle income group of 50 nations, Indians ranked sixth among the biggest out-of-pocket health spenders in 2014, as IndiaSpend reported on May 8, 2017.

Why are the poor still paying for healthcare despite the RSBY? Low enrolment, inadequate insurance cover and the lack of coverage for outpatient costs are reasons, said the study.

The cost of outpatient treatment, which the poor prefer over hospitalisation, forms 65.3% of out-of-pocket expenditure in India, according to a 2016 Brookings report. But these are not covered by RSBY.

This is a critical reason for a probable 23% increase in outpatient costs in the households that enrolled in the RSBY before 2010, found the 2017 study, which evaluated the programme up to March 2012.

Also, while the cost of hospitalisation has gone up more than 10% between 2004 and 2014, RSBY’s insurance coverage has remained unchanged.

RSBY started as a healthcare ‘experiment’

In April 2008, the ministry of labour and employment launched the RSBY. The government decided to “experiment” with the insurance schemes after it failed to provide stronger public health infrastructure, said the RSBY website.

The RSBY covers pre-existing diseases and also offers a transport cost of Rs 100 along with the hospitalisation costs. Both public and selected private hospitals are part of the scheme.

The beneficiaries pay Rs 30 during registration and the remaining premia are paid by the state and central governments. Only households on the BPL list maintained by the Census can be enrolled in RSBY.

Of the 59 million households eligible, over 36.3 million (61%) were covered by RSBY. However, it needs to cover a large proportion of the poor for its impact to be noticeable, said Anup Karan of the Indian Institute of Public Health (IIPH), Public Health Foundation of India, and one of the authors of the study. 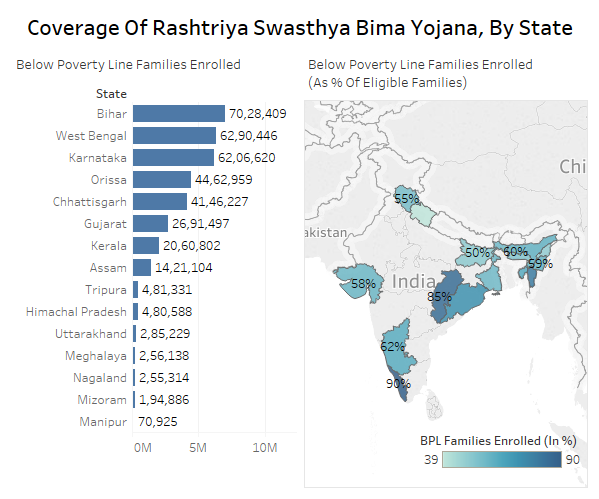 “States such as Chhattisgarh and Kerala that have a higher coverage are able to make some kind impact on the inpatient costs for the poor” said Karan.

In two states with poor health and education indicators, Assam and Bihar, only 50% to 60% of BPL households are covered, according to government data.

One of the main reasons for low enrolment is that not enough people eligible for it know about it.

Of all the eligible households, 35% were not aware of the scheme, said a 2013 study conducted by the Tata Institute of Social Sciences, Mumbai. No more than 14 million beneficiaries have been to a hospital among the 150 million registered (9.94%).

“There is a need to educate the poor on the benefits of the scheme,” said Karan.

An insurance cover of Rs 30,000 is inadequate for a family of five, said Karan.

In 2014, the average cost of hospitalisation for households was Rs 14,935 in rural India and Rs 24,435 in urban, according to the National Sample Survey Office.

The cost of hospitalisation increased 10.1% in rural areas and 10.7% in urban India in the decade ending 2014, but the RSBY insurance amount has remained the same over the nine years of the scheme’s existence. 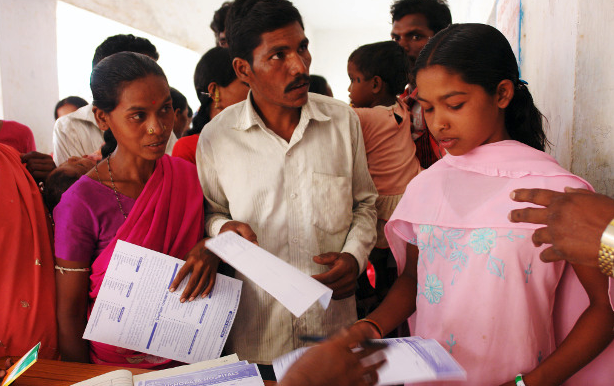 Beneficiaries enroll themselves for the Rashtriya Swasthya Bima Yojana in Andhra Pradesh. The programme has not led to any reduction in out-of-pocket expenditure by its 150 million beneficiaries, according to a new study. Credit: ILO in Asia and Pacific.

“The relatively low coverage limit of the scheme may have led some households to utilize hospital services beyond the RSBY cap,” the study said. The survey data showed that in 2012, among households incurring inpatient out-of-pocket expenditure, approximately 9% reported paying more than Rs 30,000. The average annual expenditure ranged from Rs 75,000 to Rs 80,000.

The RSBY does not pay for the cost of outpatient care, which does not involve hospitalisation. Typically, this would include doctor’s consultation fees, medicines and medical appliance costs.

It also misses out on a behavioural factor.

“The poor generally prefer outpatient treatment because it does not involve hospitalisation which leads to loss of wages,” said Karan.

Even though the RSBY pays for medicines during hospitalisation, many hospitals refuse to provide these and sometimes push for unnecessary services that adds to the cost of hospitalisation. “Regulation of health providers is essential,” said Karan.

Hospitals also tend to be unfriendly to poor patients and this discourages them from seeking medical help. “[M]any hospitals refuse to admit RSBY-enrolled patients due to administrative concerns such as delayed reimbursement by RSBY to hospitals,” said the IIPH study.

RSBY beneficiaries are given smart cards, verifiable through fingerprints, to facilitate cashless benefit transfer. But these cards are rarely used for two reasons.

How to make the scheme more effective

Increasing enrolment and educating those it covers are some of the suggestions on how to make the RSBY more effective, said the study.

The authors also suggested that outpatient costs be covered, especially of those driven by chronic conditions and are expensive to treat in the long run.

Consider Vietnam’s compulsory, state-run health insurance policy. It covers both inpatient and outpatient costs after the policy was reformed in 2002 to include outpatient costs. The change resulted in lower out-of-pocket expenditure even though it led to longer hospital stays. It also resulted in fewer days of missed school and work.

Experts also recommend the strengthening of primary care in order to bring down out-of-pocket expenditure. Neighbouring nations Sri Lanka and Thailand have both strengthened their primary health care system to provide better coverage.

Prachi Salve is an analyst and Swagata Yadavar is a principal correspondent with IndiaSpend.