In terms of police personnel, the study says that Gujarat’s sanctioned strength is one of the lowest in India in proportion to its population.

A Tata Trusts study, released in Delhi on Thursday, has ranked “model” Gujarat 12th out of 18 major states it has analysed across India to “assess” the police’s capacity to deliver justice. Several of the advanced states such as Tamil Nadu, Karnataka, Punjab, Haryana, Maharashtra, Andhra Pradesh and Telangana as well as some of the so-called Bimaru states such as Odisha, Jharkhand and Chhattisgarh are found to have ranked better than Gujarat.

Seeking to rank states in delivering fair and speedy justice, the study claims to have used only government data, saying, “Sadly, taken collectively, the data paints a grim picture of justice”. It regrets, India’s justice delivery system “is starved for budgets, manpower and infrastructure”, and “no state is fully compliant with standards it has set for itself”. It criticises “sluggish” governments for being content with creating “ad hoc and patchwork remedies to cure deeply embedded systemic failures.”

Lamenting utter shortage of police personnel, the study says, Gujarat’s sanctioned strength is one of the lowest in India in proportion to its population. Falling well below the national average (151 for 100,000 population), it is 120 in Gujarat, worse than Madhya Pradesh (147), Rajasthan (142), Madhya Pradesh (125), and Rajasthan (122). Illustratively, the study says, India’s “BRICS partners Russia and South Africa with far smaller populations have two to three times India’s ratio.” 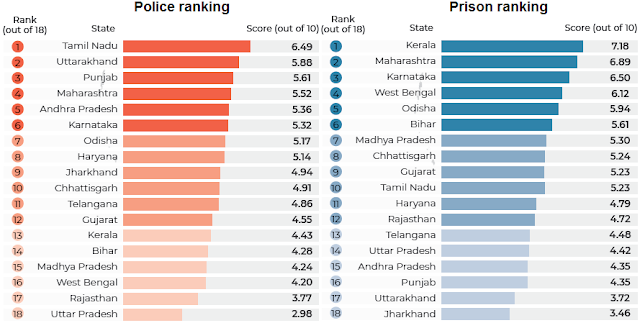 While constabulary forms 85% of the total police personnel, here the situation is even worse. While among major states Kerala and Tamil Nadu are the only ones that have “reached the sanctioned strength”, the six states where the shortfall is of more than 25% are Haryana, Bihar, West Bengal, Jharkhand, Gujarat and Uttar Pradesh.

As for the numbers of people one police station, the study finds that here again Gujarat’s performance is, again, one of the poorest. Thus, it has a whopping 140,000 people per urban police station as against 33,000 people in Odisha.

Gujarat is found to be one of the seven 18 major states (others being Rajasthan, Madhya Pradesh, Haryana, Odisha, Kerala and Tamil Nadu), which have seen a “decline in average budget utilisation in the five-year period between 2011–2012 and 2016–2017.”

Gujarat showed that while state expenditure rose by 12.5%, prison expenditure actually fell by 9.3%.

The study comments, “This reinforces the overall neglect prisons face, remaining largely ignored in terms of state priority, which necessarily impacts on their declared objective of being centres for the correction and rehabilitation of inmates. Overcrowding and staff shortages can be as hard on prison staff as prisoners.”

Pointing out that improvement in prisons “has been uneven”, the study shows that here also Gujarat has fared badly. “Between 2012– 2016, Kerala, Karnataka, Chhattisgarh, Gujarat, West Bengal, Haryana, Bihar and Maharashtra reduced vacancies at both officer and cadre staff levels”, adding, “Shifting as they are meant to, towards reform and rehabilitation, prison systems are required to have a special cohort of correctional staff.”

Citing the Model Prison Manual, 2016, which seeks recruitment of welfare officers, psychologists, lawyers, counsellors, social workers among others as part of welfare units for the wellbeing of prisoners, the study says, Gujarat, along with Jharkhand, Karnataka, Rajasthan, Uttar Pradesh and Uttarakhand have “less than ten sanctioned posts”, while several other states such as Andhra Pradesh, Haryana and Telangana “had not sanctioned even a single post for correctional staff.”