Silence Is No Longer an Option. It's Time for Our Conscience to Wake Up.

While nations across the world used the time since March 2020 to work on their healthcare system to fight the virus, we preferred using the time in ludicrous and hubristic display of optics. 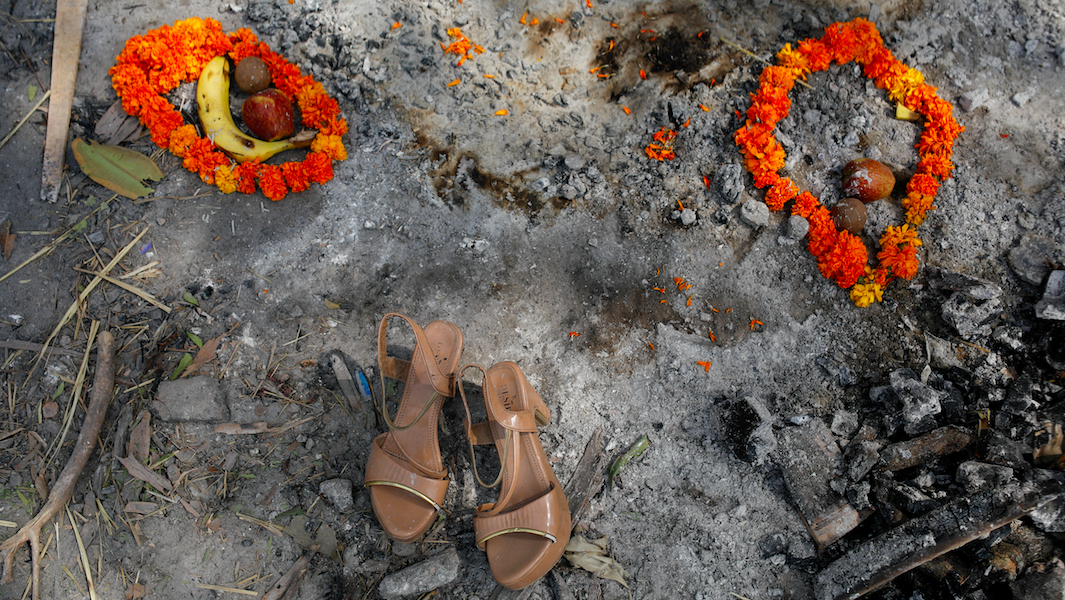 Flower garlands, fruits and a pair of sandals of a woman who died from the coronavirus disease (COVID-19), are placed by her relatives on the spot where she was cremated, as part of a ritual at a crematorium in New Delhi, India, April 30, 2021. Photo: Reuters/Adnan Abidi

Enough is enough, I kept telling myself.

We’ve seen it all, we’re seeing it more, and still more — every moment — the cries, the pains, the scrambling for oxygen, the frantic hunt for a hospital bed, the long queues even in the crematoriums under a blazing 42°C sun, and the incessant wait to perform the last rites. Not having served them when alive, the least the dead deserve is a dignified rites of exit.

Even that is hard to come by.

Early morning on April 30, when I switched on CNN, I saw a report by Clarissa Ward from one of the largest crematoriums of Delhi. These visuals are nothing new in the past 10-12 days, and nothing of the kind that I haven’t seen earlier. But it hurt in a manner that I hadn’t experienced before.

The enormity of the pain incinerated me. But my mind travelled elsewhere – full tilt in this macabre dispensing of raw, wanton deaths – to the ardent apologists.

My mind went to the unconscionable defenders of the regime, the perfervid bhakts, the paid troll army of robots implacably still unmoved with the growing death numbers across the country, and the rich corporate honchos and their myriad underlings acting as curated slaves of Mammon who see no wrong in the inaction, and the utter ineptitude of the messiah and his messianic governing regime, and would like this vast and ghastly (dis)order to go on interminably.

“Everybody loves a good drought,” P. Sainath had told us long ago. And it is still true.

Also read: It’s Not Enough To Say the Govt Has Failed. We Are Witnessing a Crime Against Humanity.

The incessant promises, the histrionic and the dexterous ventriloquism (best exemplified in the recent obsessive calling out of Didi’s name, many times over), the numerous missteps — the four-hour triumphalist call for demonetisation, the flawed GST implementation, even the breathless March 2020 lockdown on four hours’ notice, and multiple other miscues, not to speak of the hubris of power, the bigotry, and countless wrongs perpetrated on its citizens that refuse to go away — floated into my mind.

From this welter of miasma hegemonising, a few macabre thoughts assail my mind.

Aren’t all these man-made, or more aptly, aren’t all these sufferings and death entirely ‘Make in India’? Isn’t it that grisly animality has seized this nation. Haven’t human instincts and rationality evaporated, despite the loud self-proclamations of serving the people as the Pradhan Sevak?

How’s this any different from the Nazi pogroms except that while the latter was a conscious move to exterminate a section of humanity, what’s unfolding before us today is the unwitting consequence of humongous acts of omission?

I use the expression ‘Make in India’ consciously. It has been a much-hyped jingle since 2014. For, while nations across the world used the time since March 2020 to work on their healthcare system in building infrastructure and equipping them with medical equipment to fight the virus, we preferred using the time in ludicrous and hubristic display of optics.

Churlish thali-rattles and conch-blowing was followed with yet another round that was still more ludicrous — the nine-minute-lighting-of-lamps-at-nine to proudly tell the world that we’re different from all. This was succeeded by yet another ritual, the ‘bhoomi pujan’ at Ayodhya. 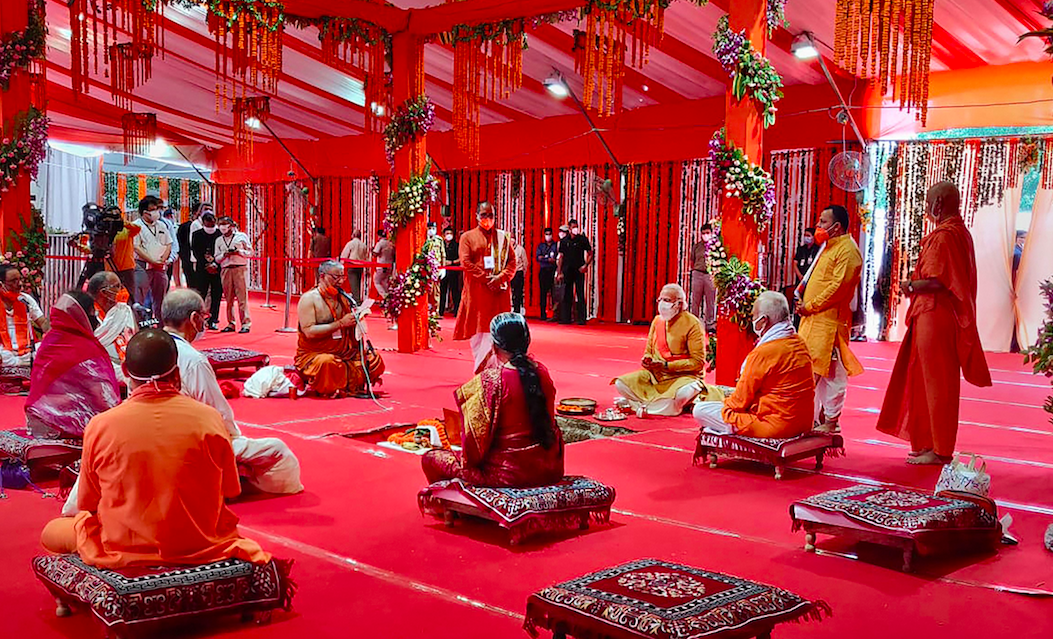 We did precious nothing, except working this ‘Make in India’ framework designed to garner optics. The amount disbursed or disbursable from the questionable PM-CARES fund, beyond the CAG’s pale, lost its way in the dead sand of limitless and opaque mishaps.

But the gilded hubris remained intact, had to be kept intact. Yes, it needed periodic reinforcement, not necessarily limited to sartorial and facial kinds. The pandemic-imposed embargo on junkets across continents led to their replacement with domestic ones. The servile flunkies flocking around were at best faux and synthetic.

Mercifully, Zoom and Skype came as godsend. The online World Economic Forum at Davos on January 28, 2021 offered an opportunity for the amour propre.

“Friends… It was predicted that India would be the most affected country from corona all over the world. It was said that there would be a tsunami of corona infections in India, somebody said 700-800 million Indians would get infected while others said two million Indians would die… In a country which is home to 18% of the world population, that country has saved humanity from a big disaster by containing corona effectively,” it was said.

Little wonder, as in Greek tragedy, nemesis tailed hubris, as though to prick this bubble. But at what cost? That of lives of the hapless common man.

With no action or rather complete inaction bar massaging uncertain ego and uneasy vanity, the bubble turned into the bumbledom of bigoted senselessness.

It first found expression in advancing the Kumbh Mela by a year and letting the lakhs of devotees to the throes of potential death; and then the crazy COVID-inappropriate electioneering and in the mask-less boast at Asansol in West Bengal on April 17, where the blessed eyes swept over the vast multitude of the rent-a-crowd, keen to gulp at the flowing leader of the nation aspiring Vishwaguruship, and the pious and sage nuggets of wisdom dripping off his mann. 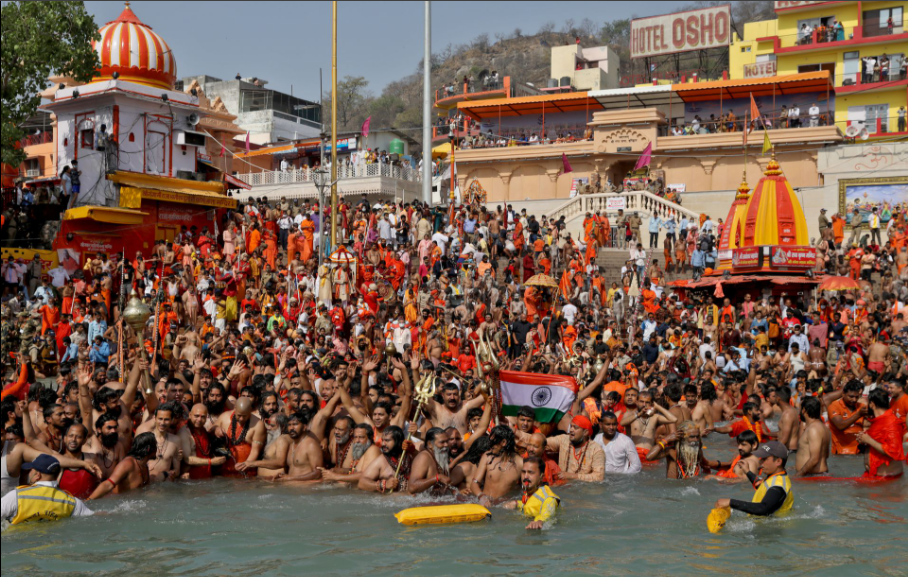 Hindu devotees take a holy dip in the Ganges River during Shahi Snan at “Kumbh Mela”, or the Pitcher Festival, amidst the spread of the coronavirus disease (COVID-19), in Haridwar, India, April 14, 2021. Reuters/Anushree Fadnavis

Alas, the consequences are here for us to reap, solely ‘Make in India’!

Look, the truth is it is hard to contain the virus now. It will blaze through at free will because it loves the crowd and the chaos that have been offered aplenty.

Unlike other desecrations that were concurred and ringingly granted the imprimatur by constitutional institutions and organs of the State, the virus just isn’t amenable to the express directions of the supremo. Instead it deems itself the supremacist, who can only be stopped in its track by science, data, transparency and ceaseless precautions. We encouraged nothing of the above. We have in lieu of Anthony Fauci, the NITI Aayog doctor spewing AYUSH-seva, or some other leading light chanting paeans of praise for the “able leadership of Prime Minister Modi.”

On the populist front, the Bharatiya Janata Party’s resolution of February 21 told us that India had “defeated COVID-19 under the able, sensitive, committed and visionary leadership of Prime Minister Modi.” Or, the inimitable words of Harsh Vardhan, the Union health minster sprouted on April 27: “India is better prepared mentally and physically this year with more experience to beat COVID-19.”

Today, “Beyond crises”, the sane words of Dr. Zarir Udwadia, a respected physician in Mumbai, are lost in the din amid the tsunami sweeping across the country, as we did with the WHO chief’s prescient words, “Beyond miserable”.

“THE DEVASTATION that a new wave of the coronavirus is wreaking on India can’t be ignored,” wrote The Washington Post as its Editorial Board’s Opinion on April 27, 2021, “And neither can the Indian government’s attempts to suppress the truth about it.” That’s a wake-up call, but have we woken up?

Is this finally the government’s Waterloo?

“Policy goals, political dramaturgy and electoral prospects are more important than the well-being of the country’s population,” says Sumit Ganguly in his piece on April 28, 2021. But it matters little, so insensitive is the government. “Despite efforts to squelch the bad press, everyone knows who is to blame for the fatal disaster unfolding today.”

Yet, it shall matter not at the hustings. Nor will it mean that things will change mid-course. Knowing the way India sways, I’m inclined not. Blame me, my pessimism. My cosmic optimism has vaporised.

Unless the nation’s conscience is pricked. And it rises as one against this carnage of death in the virtual pogroms. Silence is no more an option.